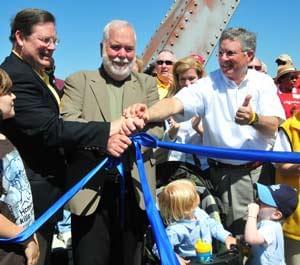 Buddy Villines was elected Pulaski County Judge in 1990, after having served six years on the Little Rock Board of Directors as Director, Vice-Mayor, and Mayor.

As the son of a Methodist Minister, he grew up in seven of Arkansas' cities and towns. He is a graduate of Hendrix College and the University of Arkansas at Little Rock School of Law, and served in Vietnam in 1970-71.

As the Chief Executive of Pulaski County, Judge Villines is responsible for the administration of services for 380,130 citizens. Aggressive leadership in issues involving economic development, education and the environment has highlighted his public service. He has been an advocate and leader in developing public transit, specifically the River Rail Trolley System. In the center of our urbanizing area, he is developing Two Rivers Park, a major nature park 10 miles from downtown Little Rock. He had a vision of uniting the cities of Little Rock and North Little Rock by providing a pedestrian/ bicycle bridge connection over Murray Lock and Dam. The Arkansas River that physically separated these two cities was also the common element that would unite the two river trail systems together. This connection provided the River Trail system of over 15 miles of pedestrian bicycle facilities and provided access to over 7000 acres of parks and park related areas along the river. In early 2000, the project received a Public Lands Discretionary Funding Grant to begin the project. 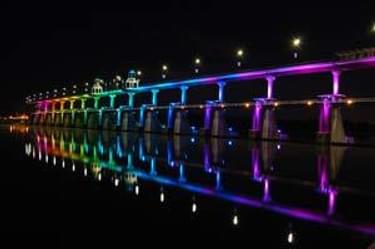 By May of 2000, Judge Villines requested the Corps of Engineers to start studying the utilization and related preliminary cost estimates of the Murray Lock and Dam on the Arkansas River as the foundation for a pedestrian bicycle bridge. The challenge was designing a bridge to attach to a fully operational lock and dam. The decision was made to position the bridge on the downstream side of the dam. The shape of the downstream surface of the dam monoliths, on which the supporting columns were to be attached, slope at approximately 55 degrees from a horizontal plane.

To add the bridge to the existing sloping structure, the design plans required that the monoliths be notched to provide a flat surface for the construction of the future concrete columns. Construction crews utilized a diamond rope saw that allowed removal of the concrete. The concrete pieces taken from the dam were salvaged and have been incorporated as aesthetic monuments on the plaza and the north and south approaches of the bridge. Construction required the use of barges and cranes floating on the upstream side of the dam. In order to insure that the river flow through the dam was controlled and would not jeopardize the work barge, the gates in the vicinity of the work barge were closed.

This effort required close coordination between the Corps personnel and the contractor. The bridge also encompasses the newest technological innovation to lighting design, LED lighting. The pier lighting system is installed on 13 piers crossing the river thus enhancing the up and down sides of the bridge and structure. Bystanders are greeted with a colorful array of light focusing on the bridges main horizontal and vertical aspects. The fixtures are wireless controlled and are capable of changing hue, intensity, and contrast arrangements through pre-programmed shows while providing over 176 million colors.

Another construction challenge was the discovery of an abandoned African American cemetery adjacent to the site. Due to federal funding requirements, the existing trail had to remain open and new construction could not disturb the cemetery property. The approach to the Big Dam Bridge was realigned to avoid the cemetery and the detour for the existing trail was located along an active railroad right-of-way. The detour trail could not disturb the archaeologically sensitive soil around the cemetery; therefore, Judge Villines directed the County crews to construct an elevated, wooden bridge as the detour thus leaving the concerned area undisturbed. In effect, Judge Villines was thinking, “Do not raise the bridge, lower the water.”