“Walk Easy; Hike Strong”: A Veteran’s Journey of Discovery on the Arizona Trail

Warrior Expeditions is a nonprofit group that helps veterans by giving them the opportunity to participate in outdoor expeditions with the intent of improving the transition back into civilian life. 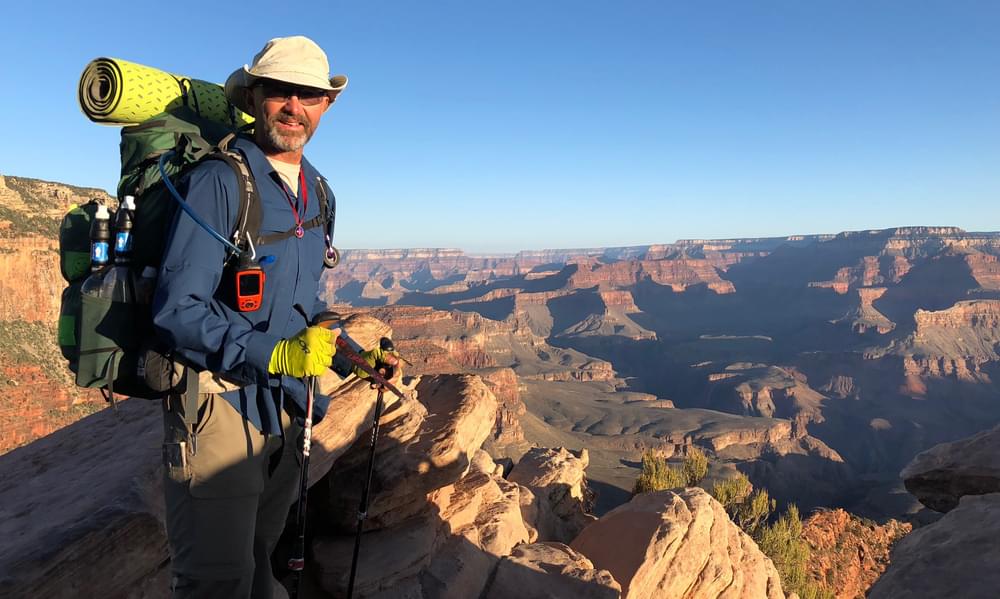 Mike Buckley at the South Rim of the Grand Canyon

Mike Buckley at the South Rim of the Grand Canyon

Just the briefest moment of fear and concern might best describe the emotion I felt when I opened the January 26th 2018 email from Warrior Expeditions that said “we have an opening in our Warrior Hike Arizona Trail Program and since you were at the top of our alternate list, below is your acceptance notification.” Little did I know how much that email would impact my life.

On August 1st, 2017, I retired from the Army after more than thirty-two years of active duty service, Private to Staff Sergeant to Colonel, six deployments and three combat tours-- and I was lost. Retirement was definitely not what I thought it would be. The culture I was attempting to become part of seemed to be diametrically different that the one I had immersed myself in for more than three decades. It was one that I assumed would welcome me, but to me had become more alienating than anything else; and I knew that was my fault and not that of society.

But worse, I was having fairly significant panic attacks again. I thought I had adjusted after returning from Iraq and Afghanistan but paradoxically, my daily life was getting worse instead of better; anxiety, anger, disillusionment, apathy, loss, rage, depression, dreams-- all the buzz words commonly displayed across the television and in print media were becoming increasingly pronounced in my everyday activities. I was in trouble.

A significant amount of studies in medical and psychological journals suggest the benefits of outdoor recreation in the treatment of Post-Traumatic Stress as well as mild and moderate depression, but in my experience it is the last treatment protocol prescribed. “Are you willing to take medication” is the recommended modus operandi for many who seek behavioral health treatment. In my case, it was no different. Point of fact, I talked to a counselor prior to beginning this journey and once the counselor was aware that I was going to undertake this challenge, the conversation shifted to “Where are your guns? Are you going to harm yourself or commit suicide, and will you take medication with you?” I chose a different path. 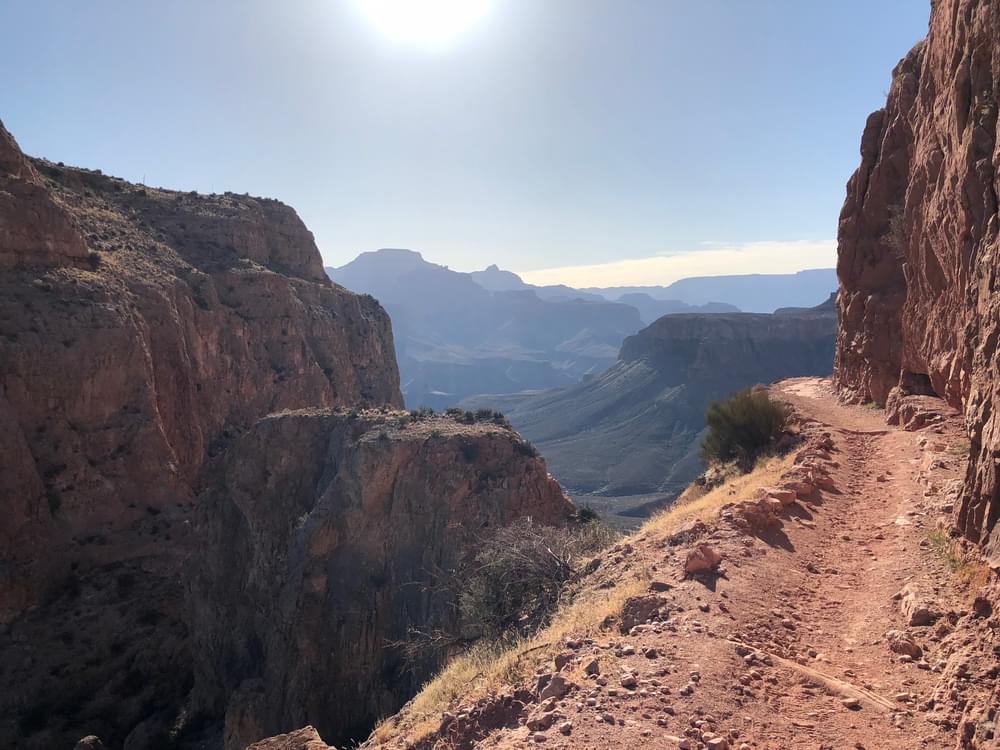 Warrior Expeditions is a nonprofit group that helps veterans by giving them the opportunity to participate in outdoor expeditions with the intent of improving the transition back into civilian life; a struggle often more difficult than imagined regardless of age, rank, position or experience. It is a struggle I thought I could face alone and one that I attempted to hide from those dear to me. I was losing the battle and knew I had to reach out for help as I was at risk of becoming one of the many who fall victim to demons they can no longer control.

The genesis, and I would offer “genius” of Warrior Expeditions is derived from the experiences of Earl Shaffer who in 1948 told a friend he was going to “walk off the war” to work out the sights, sounds and losses of World War II. Four months later, he became the first person to hike the entire length of the Appalachian Trail from Georgia to Maine. Sean Gobin recognized the therapeutic effects of long distance outdoor expeditions and founded Warrior Expeditions in 2013 after thru-hiking the Appalachian Trail upon his return from Iraq and Afghanistan with the Marine Corps. Since then the program has expanded to include the Warrior Hike, Warrior Bike and Warrior Paddle programs which “are designed to help veterans transition from their wartime experiences." Warrior Expeditions supports veterans on multiple trails throughout the country and I was fortunate to be one of two selected to thru-hike the AZT.

The Arizona Trail begins by Sierra Vista and finishes near Page, a distance exceeding 800 miles with more than a hundred thousand feet of elevation gain. Beyond water shortages, fire concerns and hazardous animal and insects; six mountain ranges, the Mogollon Rim, the Grand Canyon, and the Kaibab Plateau all stand in the way of completing the trail, making for a very difficult undertaking. I stepped onto the trail on March 28th and finished 57 days later at the Utah border on May 22nd. 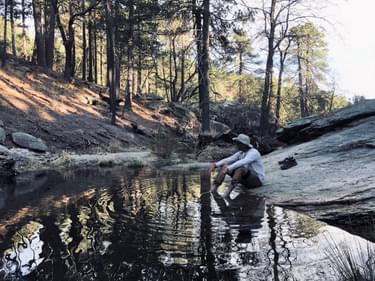 A welcome pool in the Arizona high country

The choice to search for behavioral health treatment alternatives beside pharmaceutical medications and the subsequent addiction to those meds brought me to those 57 days.

Days of meeting new and now very dear friends; friends willing to go far out of their way to make your journey special and a little easier. Days spent walking though the desert and past small communities, days struggling up Mount Lemmon, days walking through the Black Hills, days struggling to get over the Rincons and Catalinas, days carrying a thirty pound pack on swollen ankles through the Mazatzals, moments of doubt in the San Francisco Peaks, days walking through the big pines on the Mogollon Rim, days crossing the Grand Canyon. Days that were almost perfect; mid-60s, cloud cover, wind whistling wonderfully through the trees. Hawks flying all day, turkeys warbling, coyotes howling at night-- all bordered by a stillness and peace that cannot be purchased over a counter or poured from a bottle.

Many weeks ago, Sean and I talked about what the trail brings to each of us; how it is different to many, and “dichotomy of extremes” entered the conversation-- the AZT is such a dichotomy. Perhaps the trail parallels life as such a dichotomy, one in which events in our trail lives often parallel similar events in our everyday lives, and ones that similarly build upon themselves toward a greater purpose.

I’ve been asked a couple of times “what it was like” to hike from border to border? It’s really hard to explain. Adjectives include solemn, powerful, primitive, breath-taking, alone, peaceful, difficult, serene, tough, inclusive, comical, friends, changing, calm, powerful-- but perhaps the two most important words are emotion and love. 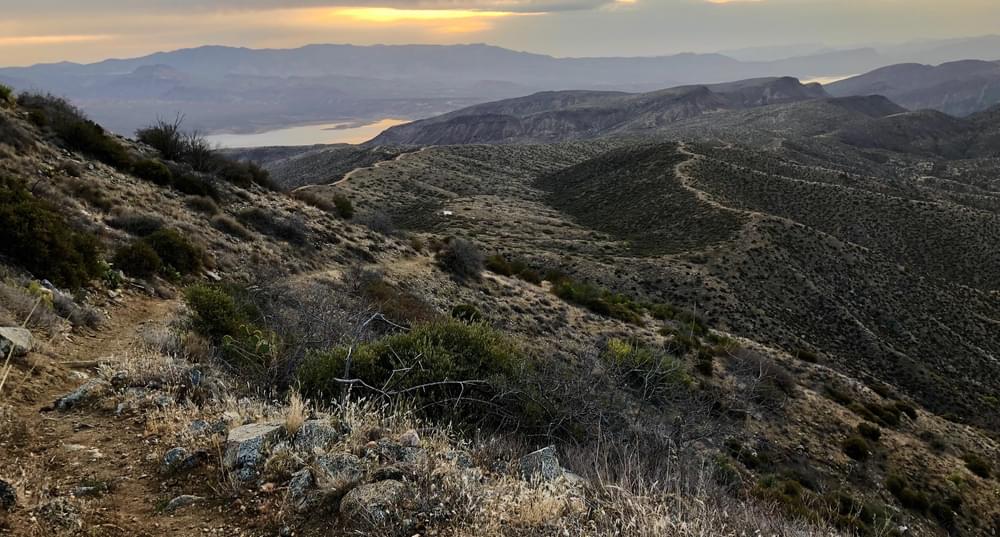 That emotion is truly powerful. It’s as if your past is cleansed by the journey, followed by the chrysalis of a new life awakening-- an incredible testament to choice and purpose finding its way no matter the circumstance—I’m glad I walked this trail and will always remember how breathtaking the sight, how solemn the path, and how powerful the message. This trail was and is an inspiration to my soul. Quiet, calm, stirring-- moments that brought me to a place of reflection and to one where maybe I could start to unravel some of the questions.

I am so thankful for the opportunity and the change brought to and in me. But sometimes today still, I wonder as to why I walked this trail; my mortality, my past, my future? Was it for the hope, peace, and calm I now feel or am I still trying to find the man I’ve become as Jason Isbell sings or perhaps, I’m longing for the man I used to be?—maybe, just maybe it is the hope of joining the two. Whatever it eventually may become, there are also other reasons for why I walked--

I walked for those I knew who lie in Section 60 of Arlington National Cemetery-- and can’t walk.

I walked for those I stood beside in the bed of a C-130 and said goodbye to as they began their journey home-- a final journey under a draped flag.

I walked for those who left a part of themselves in a foreign land.

I walked for the man I knelt beside whose life ran out onto the floor—and I still don’t know why.

I walked for the father who wants nothing more than to have his son live long enough so he and his wife can make it to his side when they turn the machines off-- so they can say goodbye.

I walked for the woman who lies on a blanket next to her husband’s grave so she can be close to him again.

I walked for the man who puts his hand on my shoulder at Arlington and tells me it’s OK because “my son is here too.”

I walked for the widows who had no words as I knelt and presented our nation’s flag to them.

I walked for the woman who hugs me, tells me “thank you for all you do”-- and whose husband fell less than a week prior and is quietly at peace elsewhere.

I walked for sons and daughters who miss their fathers.

I walked for those who serve, and those who will-- including my son.

I walked for those who receive letters they didn’t want to read.

I walked because I keep hearing I’m broken-- and I’m not.

I walked because society pushes me to be “Tommy”--and I won’t be.

I walked for my wife, who deserves better.

I walked so I won’t take the drugs.

I walked so the dreams could rest.

I walked because I could. 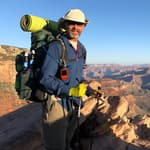 Mike “Bloody Feet” Buckley, Colonel (Ret), U.S. Army. A veteran of thirty-two years of active duty, six deployments and three combat tours; COL Buckley’s experience includes time as an Explosive Ordnance Disposal (EOD) Battalion Commander in Afghanistan, a Base Commander in Iraq, Assistant Professor in the Department of Physical Education at West Point, and as a U.S. Army War College Fellow in the Institute for National Security and Counterterrorism, Syracuse University. Education includes a M.S. in Kinesiology, a B.S. in Public Management and several national coaching certifications. He recently thru-hiked the Arizona Trail under the auspices of Warrior Expeditions and can often be found on a nearby trail or on his bike on a quiet country road. He currently resides in Cazenovia NY with his family.