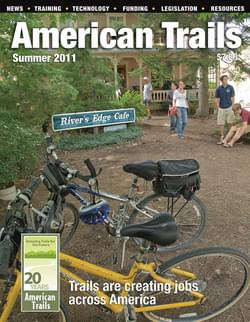 The River’s Edge Café is one of many businesses along the Great Allegheny Passage that cater to trail users. Photo from Trail Town Program® by paul wiegman

This article first appeared in the Summer, 2011 issue of American Trails Magazine.

The River’s Edge Café is one of many businesses along the Great Allegheny Passage that cater to trail users. Photo from Trail Town Program® by paul wiegman

This article first appeared in the Summer, 2011 issue of American Trails Magazine.

There are the obvious tourist destinations: cosmopolitan cities of Europe, warm southern beaches, and ancient structures of countries and cultures much older than ours.

Yet there are other less boastful places that invite visitors from around the world to come and enjoy the outdoors and small-town hospitality. One such place is the Great Allegheny Passage in southwestern Pennsylvania and western Maryland.

It was here that the Parker House Country Inn (Confluence, PA) recently experienced an accidental “International Week” as each day brought new guests from around the world to bike the trail. Here’s how the week shaped up: Australians visited on Monday; Canadians on Tuesday; South Africans on Wednesday; Germans on Thursday; Austrians on Friday; and yet another group of Australians arrived on Saturday.

Such an experience may be normal for places like Paris, London, or New York City, but it’s a pretty big deal for rural Pennsylvania. Owner Mary Auckerman remarked, “I’m pleasantly surprised. We’ve often had international guests here to visit Frank Lloyd Wright’s Fallingwater. The new twist is internationals finding us because of the trail.” And it’s no wonder. One of the recent visitors wrote in the inn’s guestbook, “The [Great Allegheny Passage] is well-named. It’s truly great.”

“International Week” is just one of many examples of trail tourism’s valuable impact on the economic health of rural communities along the Great Allegheny Passage (GAP). But first, the story of the GAP.

The GAP is a 141-mile trail built on abandoned rail lines that stretches from Cumberland, MD to Homestead, PA, just outside of Pittsburgh. In Cumberland, it connects to the C&O Canal Towpath to Georgetown, Washington, D.C. Together these trails create a nearly level path between two major cities, through the mountains and forests, and along the rivers of the Appalachian countryside.

The GAP hosts over 800,000 trips a year and, in 2008, generated over $40 million in direct annual spending and another $7.5 million in wages, making the trail an important economic generator in the region. The first section of trail, a nine mile segment near Ohiopyle, PA, was completed in 1986 after years of planning and construction. Yet it took the GAP over three decades to reach the success that it has and for adjacent communities to hone in on the trail’s economic benefits.

Anticipating the increased appeal of the trail once this connection was made, the Allegheny Trail Alliance (builders of the GAP) partnered with the PA Department of Conservation and Natural Resources (DCNR) and The Progress Fund (a non-profit Community Development Finance Institution) to create a new program to help maximize the economic potential of trail tourism. In 2007, the Trail Town Program was launched to direct and assist economic development efforts in six Pennsylvania towns. The program’s efforts have since expanded to the trail’s terminus in western Maryland.

The Trail Town Program envisions a corridor of economically viable trail communities along the Great Allegheny Passage. The primary measure of success is vibrant downtowns with thriving businesses creating jobs in these communities. Taking a regional approach to sustainable development has proven effective. The Trail Towns have experienced a net gain of 47 new and 13 expanded trail-serving businesses since 2007. The Progress Fund, which administers the Trail Town Program, provided nearly $3 million in loans to many of these businesses, leveraging another $4 million in private business owner investment.

Access to capital and the entrepreneurial coaching that comes with it have contributed to business growth in the Trail Towns. Other key efforts by the Trail Town Program® and its partners have included economic research; annual trail counts; trail-wide marketing and promotion; installation of signs, informational kiosks, and bike racks; creation of a sustainable business network (GAP SBN); and preservation planning.

The common trait among all of these projects is that they were part of a regional agenda. Simply put, working to address issues and opportunities across eight communities has been more effective than if the communities had tackled similar projects independently.

The GAP is quickly approaching completion of its final mile, which will connect the GAP to Pittsburgh’s Point State Park, making it possible for people from all around the world to bike from Georgetown, Washington D.C. to the confluence of the Monongahela, Allegheny, and Ohio Rivers in Pittsburgh. Anticipating this exciting milestone in GAP and rail-trail history, the Trail Town Program® and many partners continue to revitalize trail communities, allowing the region to continue to benefit from trail tourism. 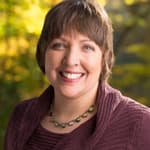 Amy Camp founded Cycle Forward in 2013 with the plan to help communities better connect to and benefit from their trails. She is a trails and tourism consultant, a placemaker, and a certified coach. She helped to launch the nationally recognized Trail Town Program® in 2007. She has since offered her consulting services throughout Appalachia, the Rust Belt, and other locations in the U.S. and Canada. Her book, Deciding on Trails: 7 Practices of Healthy Trail Towns, was published in December 2020. Amy served on the Board of American Trails from 2012-17, acting as Board Secretary and Chair of the Hulet Hornbeck Emerging Leaders Scholarship Program. She is an Associate Certified Coach through the International Coach Federation and firmly believes that her coaching certification makes her a better consultant. Amy lives in Pittsburgh, Pennsylvania, where she first grew to love communities and began her work to help improve them.

There aren’t cash registers on the trail. So if you want cyclists to boost your local economy, you have to tap your town into that opportunity— actively. Pedal your whole community forward by transforming into a bike-friendly destination where people want to stay, explore and spend. Our Trail Town Program®, created by The Progress Fund, was the first to test this idea. And we’ve proven it works, multiplying the economic impact along the Great Allegheny Passage over 10+ years. We’re the longest-running, most successful Trail Town revitalization project. Follow our lead. 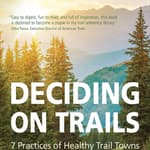