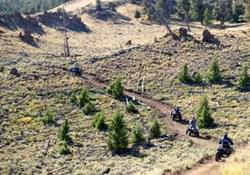 The primary work of this project, originally known as the Bayhorse Trail Connector, consisted of converting a network of user-created motorcycle trails and jeep roads into a designated ATV trail linking the town of Challis, Idaho to the Bayhorse Townsite, a mining ghost-town that has been converted into a “history park” and OHV trailhead by the Idaho Department of Parks and Recreation (IDPR).

The trail itself is 7.5 miles long, beginning at approximately 5,020 feet in elevation at the Land of the Yankee Fork Interpretive Center, winding up and around Blue Mountain, and peaking out on land managed by the U.S. Forest Service at about 8,430 feet. Along the way, the trail provides outstanding views of the Lost River Range, the Salmon River Basin, and skirts an Area of Critical Environmental Concern managed for Bighorn Sheep habitat.

A significant component of the project was route restoration at one of the trailheads where years of neglect had resulted in a tangle of roads, trails, and mud-bogs. A technique called “vertical mulching” was utilized to rehabilitate the extraneous routes, disguising them to allow for eventual natural regeneration of grasses and shrubs. 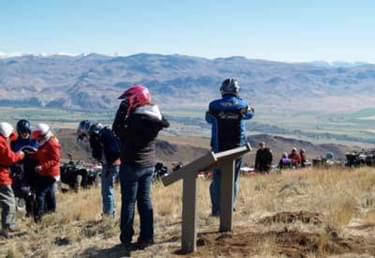 The project, which received $102,313 in 2009 RTP funding, was truly a cooperative effort among federal, state, and nonprofit entities. Interpretive material, trail layout and design, and trail construction were provided by the Bureau of Land Management. The grant for funding was written and administered by the Great Basin Institute, which also provided youth crews to rehabilitate the trailhead area and staff specialists to design the interpretive panels and oversee project implementation.

The IDPR awarded and managed the RTP funding and also provided expertise and route maintenance once the trail was constructed. In 2010, the IDPR approached the BLM with a request to rename the trail after IDPR board member Ernest Lombard, a longtime advocate for the development of the Bayhorse Townsite and associated OHV trail system.