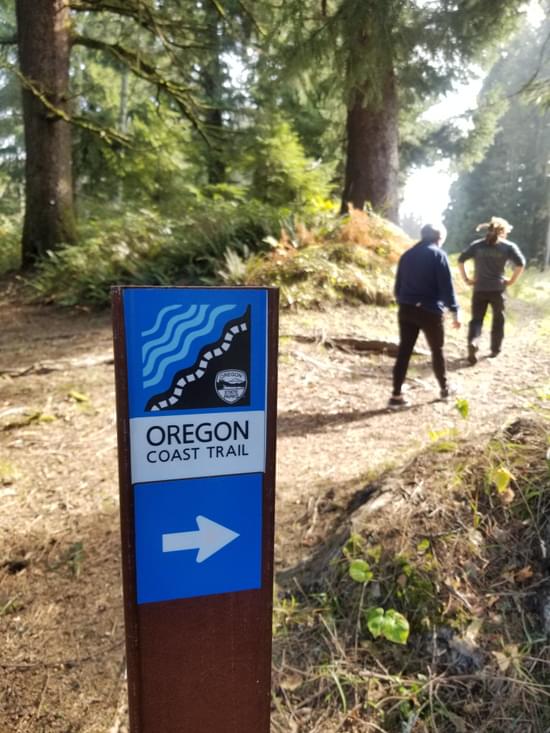 The Neahkahnie Mountain to Manzanita Trail Project added a new segment to the Oregon Coast Trail (OCT), one that had previously not existed. The OCT covers some 360 miles from the Washington to the California borders, much of it hiked along Oregon’s public beaches.

The Neahkahnie Mountain to Manzanita Trail Project added a new segment to the Oregon Coast Trail (OCT), one that had previously not existed. The OCT covers some 360 miles from the Washington to the California borders, much of it hiked along Oregon’s public beaches. Other portions are walked over scenic headlands, capes, as well as state and local parks. It also traverses sidewalks in many local coastal communities. The OCT offers spectacular scenery and diverse terrain all along the route. Unfortunately, after more than forty years of its existence, the trail is not complete, and portions of it are required to be walked along the shoulder of US Highway 101, an arrangement which is neither safe nor pleasant.

The primary focus of the Neahkahnie Mountain to Manzanita Trail was to address one such gap of over two miles between the south side of Neahkahnie Mountain (located within Oswald West State Park) and the city of Manzanita. In 2016, the City of Manzanita was awarded a Recreational Trails Program grant through the Oregon Parks and Recreation District (OPRD) for the project. The City played a key role throughout the duration of the project by serving as fiscal agent, and in facilitating various interagency agreements needed to document key roles and responsibilities.

The newly completed trail directly connects to the OCT to the north, and to the south it leads hikers into the town of Manzanita, where there are restrooms, a visitor center, and other amenities. From there, OCT hikers continue walking south on the beach. The new trail segment also provides an informational kiosk at the north trailhead, and comprehensive signage along the route. 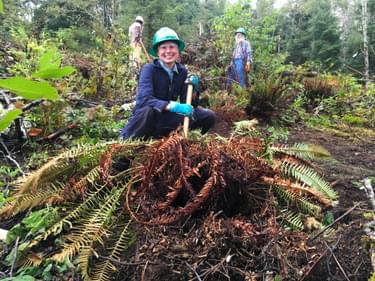 The project is unique in that four separate landowners have allowed access for the purpose of a recreational trail. The north end of the trail begins on property owned and managed by the OPRD. It soon enters land owned and managed by the Lower Nehalem Community Trust, then onto a stretch of private property and, finally, a small portion of the trail is within the highway right-of-way owned by the Oregon Department of Transportation. All of these entities entered into a memorandum of understanding to allow access, and to further describe roles and responsibilities. In addition, the Tillamook Peoples Utility District, which oversees and maintains a utility corridor within the trail alignment, was a partner in the planning discussions.

The Oregon Coast Visitors Association (OCVA) has also been a valued stakeholder. OCVA has provided financial assistance for trail maintenance, and has identified completion of the Oregon Coast Trail as one of its signature projects.

Trail construction began in 2019, under the auspices of the Northwest Youth Corps. The Youth Corps supervised the trail work with various crews of youth, providing them an opportunity for valuable work experience as well as, for many, a chance to see a new part of the country. OPRD provided camping facilities for the groups throughout the summer. This arrangement proved costo-effective for all parties involved.

Final trail completion was deferred in 2020 because of the pandemic. Trailkeepers of Oregon (TKO), a private non-profit organization dedicated to trail maintenance throughout Oregon, was able to make the finishing touches in the summer of 2020 once covid-related protocols had been established. TKO engaged a broad range of local volunteers to complete the trail, and is responsible for ongoing maintenance of the trail. A local TKO staff member resides in Manzanita and is available to organize work parties, or assist in responding to trail maintenance needs.

The trail was opened for public use in late 2020.