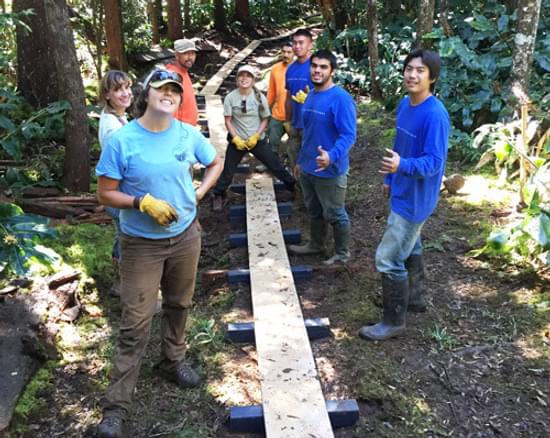 Trail crew with the new boardwalk

A major rehabilitation and boardwalk replacement project to preserve access on the Alaka'i Swamp Trail.

The Alaka'i Swamp Trail is a 3.5-mile long pathway located in the Na Pali-Kona Forest Reserve and Hono o Na Pali Natural Area Reserve on the island of Kauai. The trail is situated in a marshland that is home to a number of plant and animal species that can only be found in the State of Hawaii. The Alaka'i Swamp is one of the world’s highest elevation wetlands and is a defining feature on Hawaii’s island landscape.

In September of 2016, the Kauai Branch, Na Ala Hele Program completed a major maintenance and rehabilitation project on the Alaka'i Swamp Trail. The project, annually awarded $16,000 of RTP funding and $4,000 of State matched funding for regular maintenance, received an additional $500,000 State CIP award to replace the severely dilapidated boardwalk and restore safe access to a unique Hawaiian ecosystem.

To access this unique ecosystem for conservation purposes, the Alaka'i Swamp Trail was established in 1981. The boardwalk, large redwood planks lined with wire mesh, allowed access into the sensitive environment without endangering trail users on unstable terrain. 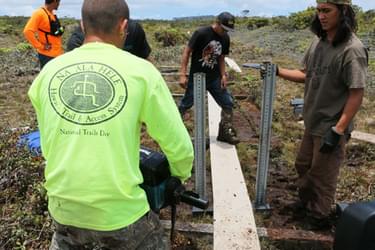 Today, the trail is used for recreational, pedestrian access. Trail visitors are given a unique and invaluable experience in native Hawaii, encouraging conservation awareness and stewardship of limited resources. School groups and island youth are drawn to the swamp to learn about and experience a part of Hawaii that few would be able to access without the boardwalk trail.

Some of the staff that helps to maintain state trail systems, through the Na Ala Hele Program, remember visiting the Alaka'i Swamp Trail when it was first made accessible. Through the course of 20+ years, highly humid conditions and constant use have rotted the boardwalk and rusted the mesh stabilizers, leaving many sections of the boardwalk unsafe to public users. Pedestrians would get lost in the swamp trail while trying to go around marshy terrain and broken down sections. 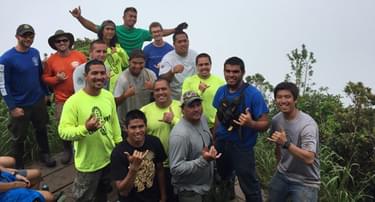 In 2014, $500,000 of CIP funding was received from the Hawaii State Legislature to replace boardwalk on the Alaka'i Swamp Trail. It was proposed that sections would be reconstructed with new, slip-proof boardwalk is constructed with sections of recycled plastic that have been reinforced with fiberglass.

This new material will be temperature stable in the humid, sunny environment. The reinforced sections will also resist degradation in heavy moisture. Work on the project began in May 2016 and was completed in September 2016. The project took 1900 Na Ala Hele staff hours to complete, with 52 hours of helicopter operations, carrying over 50 sling loads of material, and 320 volunteer hours.

Much of the labor used to expediently complete the project was also provided by Kupu, an AmeriCorps partner. Once again, perpetuating they cycle of stewardship on the unique island feature. The project also drew additional Na Ala Hele staff from neighboring islands to aid in completion. This is the first time the staff worked together on a trail project, state-wide, in 20 years.