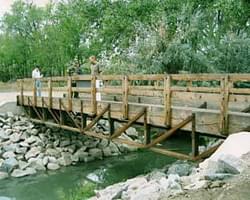 In Pierre, South Dakota, a local Vietnam veteran, Linus Storms, became passionate about doing something to recognize a decorated National Guard Unit from his area.

The 200th Engineering National Guard Unit from Pierre, South Dakota, was stationed in Iraq for more than a year and performed heroically, building numerous bridges in support of Operation Iraqi Freedom. By the end of the tour, 45 Army commendations, nine bronze medals and four Purple Hearts had been awarded to the company. 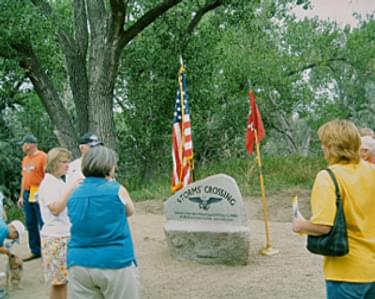 Linus Storms, a local Vietnam veteran from Pierre, became passionate about doing something to recognize the National Guard Unit. Mr. Storms teamed up with the Pierre Economic Development Corporation to develop a project that was both necessary and appropriate for the group’s expertise – building a bridge. When the unit returned to Pierre they were greeted with a “hero’s welcome,” and a task that they tackled quickly and enthusiastically.

The South Dakota National Guard donated time and labor to replace a hazardous footbridge along the Lewis and Clark Bicentennial Trail. The bridge spans 40 feet and was constructed at grade to provide for users with physical challenges. A marker and bench were also installed at the site.

Unfortunately, Mr. Storms passed away before construction of the bridge was complete. The bridge was named “Storms’ Crossing” and now serves as a memorial to him and in recognition of the 200th Engineering Unit.