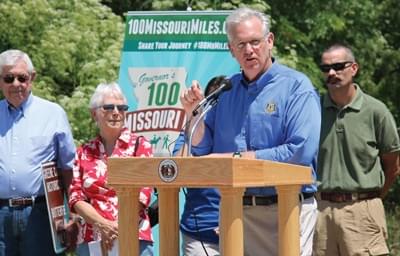 The new initiative was designed to encourage Missourians to complete “100 Missouri Miles” of physical activity during the year, while promoting the outstanding trails in the Show-Me State.

The program was launched at the opening ceremonies of the Special Olympics, Missouri State Summer Games. State and local officials, as well as fitness and outdoor enthusiasts, immediately came on board to support the program and encourage Missourians to enjoy walking, running, biking, rolling, paddling, or hiking on trails.

Special events throughout the state, a strong social media presence and a user-friendly website helped get the word out about the program. On Facebook, Instagram and Twitter, Missourians were encouraged to post photos and share their outdoor experiences. Social media was also used to share health information, promote state parks and other outdoor resources, and update participants on Challenge statistics.

On the 100MissouriMiles.com, participants could easily track their miles and find nearby trail resources to explore. The website also featured the total mileage of the Governor and First Lady, allowing participants the opportunity to compare their progress. Participants’ social media messages were also featured on the site. 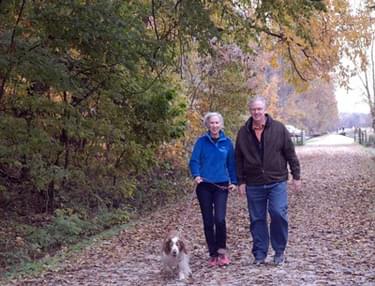 In August, Gov. Nixon announced a new feature on the website to allow groups to log their miles together. Individuals could now join friends and co-workers to track their mileage as a team. Businesses, educational organizations and groups of friends signed on to take the challenge together. Through the Group Directory online, users can join an existing Group or create their own. Some groups specialize in a particular activity while others encourage members to log all their outdoor activities. Within months, nearly 500 organizations— including schools, cross country teams, and fitness clubs— had signed up to take the Challenge as a group, while almost 200 Missouri businesses implemented the initiative into office wellness programs to promote overall health and physical activity among employees.

By late September 2013, Missourians had logged a total of 1 million miles of outdoor activity. By the end of the year, 12,554 individuals had signed up to take on the challenge. The most popular place to log activity was Katy Trail State Park, where participants totaled 33, 985 miles on the nation’s longest rails-to-trails project. The program’s success statewide was evident in the geographical areas covered by the counties with the highest number of participants: Vernon County in the Southwest, Boone County in Central Missouri, and St. Louis County in the East.

In March 2014, the Gov. and First Lady Nixon launched the second year of the challenge. A large group of enthusiastic supporters turned out for the event at Rock Bridge Memorial State Park in Columbia, Mo. The campaign once again challenges Missourians to hit the trails and enjoy the great outdoors.

In 2014, the program continues to expand. One addition unveiled in March is the opportunity to earn a series of e-badges. As users log miles, new icons appear in their “Trophy Room.” Badges can be earned for mileage and specific activities, as well as for logging miles at specific state parks. Individuals can share their accomplishments on social media and invite their friends to join the challenge and earn their own badges.

As of July 31, 20,862 participants completed more than two million miles with the Governor’s 100 Missouri Miles Challenge. Through social media outreach, partnering across multiple organizations and agencies, and introducing innovative new aspects of the challenge to engage additional user groups, the Governor’s 100 Missouri Miles Challenge has increased the awareness of Missouri’s trail resources and the benefits of exploring the outdoors.