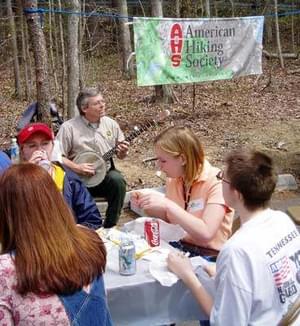 For more than 10 years now, Bob has hosted a grassroots music radio show.

Each Sunday night at 8:30 PM Eastern Time, people from all over the world can tune in to listen to The Cumberland Trail -- a half-hour radio program hosted by Bob Fulcher, Park Manager of the Cumberland Trail State Park (a Millennium Legacy Trail), featuring the musicians who live within shouting distance of our trail.

Bob's aim is to represent the grassroots music of the 11 county corridor of the Cumberland Trail as realistically and fully as he can. The Cumberland Trail offers the rarest recordings from our region, often never-before issued or broadcast. Low fidelity. Exquisite. A few rough edges for traction. Electrifying, raw, brilliant performances for those who like the way music really sounds. The Cumberland Trail is the only state or national park in America using weekly musical documentaries to present and preserve its heritage.

The Cumberland Trail features a lot of custom-pressed LP album cuts -- vinyl that never made it to the stores, was never sold by mail order houses, and can't be located on the internet. They play custom 45s and cassettes -- the kind that sold only a few hundred copies, or not even that many. They feature home recordings made by families and "field recordings" made by professional folklorists -- 78's, reel to reel recordings, and home cassettes -- that only exist as a single copies, music that was recorded in the living rooms, basements, and front porches everywhere in our region.

Festival and concert recording make it on their show, too, from events in the Cumberland Mountains that bring out the best local music, like the Mountain Opry in Signal Mountain, the Rocky Fork Jamboree in Morgan County, or the Mountaineer Folk Festival at Fall Creek Falls State Park. And, they play the great music from the full-time professional musicians who were born and raised along the Cumberland Trail or live there now, folks like fiddling Curly Fox, Charlie Collins, Don and Earl, and the Isaacs, and the commercial 78s, 45s, 33s, cassettes, and cds that have been produced of our semi-professional bands and players.

The host of the program is Bob Fulcher, Park Manager of the Cumberland Trail State Park. He has worked as a park naturalist and ranger for over 25 years, a great portion of that time in Cumberlands. Since 1976, he has recorded and presented musicians from the Cumberland Mountains for the Library of Congress, the Smithsonian Institution, the Tennessee State Library and Archives, Tennessee Arts Commission, the Tennessee Bureau of State Parks, the National Folk Festival, and for County Records, the Tennessee Folklore Society label, and several other small labels.

TO TUNE IN: Go to www.WDVX.com to find the live webcast. (You may have to download the suggested software to access the program).