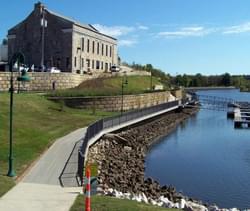 The trail at Steamboat Landing and Harrison Street

The City of Warsaw and the U.S. Army Corps of Engineers worked together to create an accessible pedestrian and bicycle accessible connection between downtown Warsaw and the trail system in the Drake Harbor Recreation Area.

Since 2010, RTP funds have been used for a multi-phased trails system in Warsaw, Missouri. The Warsaw Riverfront Trails Project was planned, designed, and constructed to provide an accessible pedestrian and bicycle connection between downtown Warsaw and the Drake Harbor Recreation Area. This recreation area contains multiple riverfront and interconnecting trails along the waterfront and the access road into the harbor.

This RTP project is an important section of a multi-phase plan that will ultimately provide over 20 miles of accessible trails and "complete streets" throughout the City and to surrounding recreational activity sites. Three miles of continuous trail has been constructed that extend from the Bledsoe Ferry Sports Complex below Truman Lake to downtown Warsaw. This trails system allows for pedestrians and bicyclists to safely travel from the sports complexes to downtown and beyond without crossing any roadways.

Due to Warsaw’s proximity to the Truman Dam, the Corps of Engineers owns a great deal of waterfront property in and around the town, and they lease many of these properties to Warsaw for its recreational facilities. These include Warsaw’s golf course, baseball sports complex, mountain bike system, and historic Drake Harbor, all of which connect to the waterfront trail network. 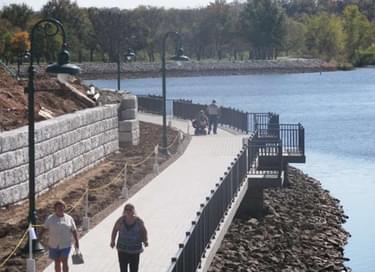 Boardwalk section of the trail system

The Warsaw trail system was designed with a commitment to allow all users to enjoy the outdoors. This includes local residents, out of town visitors, and those with disabilities. A new trailhead project was undertaken to encourage more trail users to access the network. The trailhead functions as a place to enable visitors to safely begin their adventure on foot, remove bicycles from their vehicles, and to encourage those with wheelchairs or strollers to try out the trails.

Since completion of this multi-phased project, Warsaw has seen increased numbers of visitors who arrive by boat, dock at the harbor and explore the downtown and riverfront amenities. Many of these visitors stay overnight. the city sees this trend continuing and is pursuing more boat slips in the harbor.

Warsaw developed its 2006 Trail Master Plan through a collaborative planning process between town staff, community members, and landscape architecture students from Drury University. Having an established plan and vision for the entire network made Warsaw more competitive for state and federal grants. The collaborative process got community members excited about the project and provided city staff with clear direction. Warsaw’s planning efforts also facilitated public and private investment near the trails for everything from historic building restoration projects to new entertainment and recreation facilities.

While Recreational Trails Program grants have been essential to the project, funds from a wide variety of sources have been used on other phases. These include: 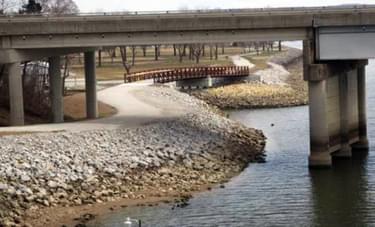 Drake Harbor Phase III was funded in 2011 with a RTP grant. This project was 1,000 feet in length and extended the previous section to Steamboat Landing and Harrison Street. This project included a lighted paved trail around the inside of the harbor, from the boat ramp to Steamboat Landing as well as a bike lane along one side of the Benton Street Road into the harbor.

Steamboat Landing Phase II was funded in 2012 with a RTP grant. The project was part of a multi-level trail system and parking area above the Steamboat Landing Boardwalk that transformed the waterfront access and scenic vista overlooking the river. Design and construction included Big Block retaining walls and 1,250 feet of 8-foot wide concrete trail with connections to Benton Street and Steamboat Landing.

Swinging Bridge Trail Final Phase was funded in 2013 with a RTP grant. This grant placed a hard surface and lights on the trail, thereby allowing for year-round, day and night usage.

Joe Dice Phase III was funded in 2014 with a RTP grant. This project placed a very dense hard wood planks for a permanent deck on the bridge. It completed the Joe Dice Bridge and it is now fully functional.