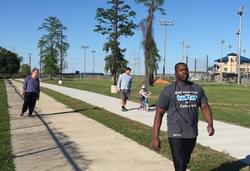 When Hurricane Katrina struck Louisiana in 2005, St. Bernard Parish was completely devastated and there was no other safe outdoor place to exercise in the parish.

Hurricane Katrina flooded the entire parish and severely damaged virtually every structure. In addition, the storm dislodged, lifted and damaged an above-ground storage tank at Murphy Refinery, causing over 1 million gallons of mixed crude oil to be released and flow over the adjacent land, an area of about one square mile that included 1,700 homes and businesses, and Val Riess Park.

While recovery efforts initially focused on rebuilding, in 2010 the parish’s great need for a place to exercise and to gather as a community was recognized and St. Bernard was awarded a $90,385 grant from the Recreational Trails Program. That grant was matched by a $150,000 grant from the Land and Water Conservation Program.

The grant was for upgrading the substandard existing trail that was too narrow for both pedestrians and bicyclists to safely use the trail together. The plans also included lighting the trail so users could take advantage of the cooler temperatures after sundown to exercise. This was important with the high temperatures and humidity experienced in south Louisiana. Prior to the storm, the local high school had kept the track around the football field lit at night so the community could use the track for exercise. It was a popular gathering place for the community, but following the storm this venue was no longer available, and there was no other safe outdoor place to exercise in the parish. 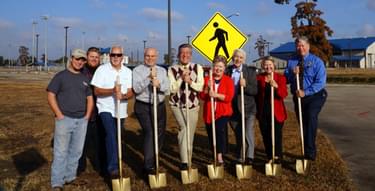 In 2014, with time set to expire in December of that year on the Land and Water Conservation grant and cost estimates for the trail significantly higher than expected, no money could be found to provide the match on the grants, or to pick up the shortfall in the construction cost.

When the project was presented to the Committee in April 2014, the Committee unanimously approved a 100% grant of $374,000 to cover the match for both grants and the remaining construction costs for the project. The private funding from the Cy Pres Committee allowed the project to move forward.

When cost overruns again threatened the project in October 2014, the Recreational Trails Program supplemented their grant with an additional $37,000, and St. Bernard Parish Bond Fund provided an additional $6,000 for concrete testing and miscellaneous costs not included in the original construction estimates. The entire process from advertisement for bids to construction completion was done in less than seven months.

Today at Val Riess Park, there is a divided path, with a six-foot path for bicycles and a parallel four-foot path for pedestrians. The path is 0.9 miles long and is wheelchair accessible. The entire path is lighted, enabling use during the cooler evening hours.

Ten years after Hurricane Katrina, the path also serves as a symbol for the residents of St. Bernard Parish that their lives are finally returning to normal, and that their sights in the future can be focused on moving the community forward instead of concentrating on recovery.