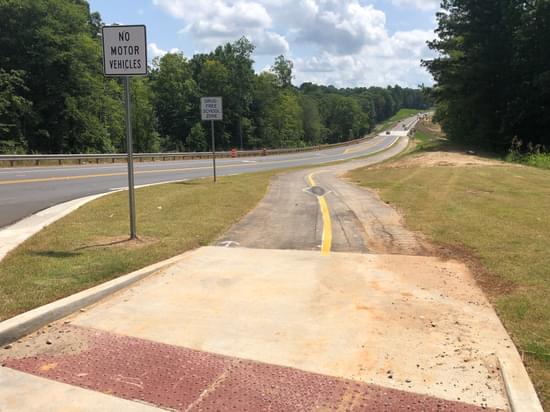 In 2014 and 2015, Gwinnett County received $100,000 (each year; total of $200,000) in Recreational Trails Program (RTP) funding for the Tribble Mill Greenway connection, now known as the Harris Greenway Trail. As the engineering and design services for the Harris Greenway Trail was being completed, Gwinnett County recognized the need for a high-quality connected network of multiuse paths and greenways for the benefit of its residents and employees. The Gwinnett Countywide Trails Master Plan was developed between 2017 and 2018 and began implementation in 2019.

Gwinnett County is currently the second most populous county in Georgia with more than 936,000 residents and also has a minority-majority population. By 2050, estimates project Gwinnett could grow to as many as 1.5 million residents, making it the most populated county in the state. To support an increasingly dynamic and diverse community, efforts must be made to expand and improve transportation options to sustainably accommodate this growth. The Gwinnett Countywide Master Trails Plan seeks to nearly triple the trails mileage in the County and will include both transportation and recreation trail facilities.

There are currently 18 trails under design or construction from the Countywide Trails Master Plan. These trails, including the Harris Greenway Trail, encourage community linkages by providing and enhancing opportunities for trail-based recreation and transportation uses within and between Gwinnett communities. For example, the Harris Greenway Trail will serve as a connection between two parks, a high school, and residential neighborhoods. The Countywide Trails Master Plan is the culmination of partnerships among the Board of Commissioners, County Departments, the 16 Gwinnett Cities, 6 Gwinnett Community Improvement Districts (CIDs), other agencies and organizations, regional systems, and the public. Funding sources to implement the plan include local sales tax dollars (Special Purpose Local Option Sales Taxes, or SPLOST), local recreation funds, transportation funds from the Atlanta Regional Commission (ARC), grants, public-private partnerships, and other strategies. For example, Gwinnett County recently became one of the first counties in the county to sign onto the National Recreation and Park Association’s 10-Minute Walk Campaign and received a grant to fund design for one of its trails, Singleton Greenway Phase 2, which will have an edible landscape component to respond to food insecurity in the area.

Implementation of the Countywide Trails Master Plan not only includes improving and expanding the trails system but also building community awareness of the plan and system. Building this awareness has included branding and robust and engaging efforts, such as public outreach efforts at community events and festivals as well as at public meetings for Gwinnett’s Comprehensive Parks and Recreation Master Plan that is underway. The Gwinnett Countywide Trails Master Plan leverages a project website (www.GwinnettTrails.com) and the County’s social media platforms (Facebook, Instagram, and Twitter) to keep the community informed, promote trail-related safety, and encourage awareness and use of the system. Gwinnett has also developed a wayfinding and signage plan to build a physical identity for Gwinnett Trails. In addition, unique signage is used when a trail that is funded by SPLOST begins construction, such as the Harris Greenway Trail. These signs are important to help the community recognize the ties between the SPLOST funds and the advancement of the trails system.

Harris Greenway Trail, formerly Tribble Mill Greenway connection, is the first project to be constructed since the plan was adopted April 2018 and is anticipated to open for public use in September 2020.