We Built It and They Came 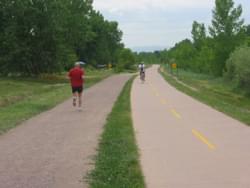 The Mary Carter Greenway Trail is the flagship trail of the Metro Denver southern suburbs. Initiated in 1980, the eight-mile, $4 million trail and paddleway has become the spine of the extensive trail network serving the populous southern suburbs and is an integral part of Denver's world-class trails and greenways network.

The backbone of the system is a 10'-wide warm-tone concrete pathway that accommodates walkers, joggers, roller skaters, and bicyclists. The trail was also part of the restoration of the South Platte River with clean-up, re-vegetation, landscaping and the creation of a 600-acre floodplain conservation park. The project has won national awards and is considered a model for urban greenway development.

Success, however, has bred some problems and challenges. Centrally located and attractive, the trail has quickly filled with users of all types from families with toddlers in strollers to daily bicycle commuters, to spandex-clad high speed bicyclists on training rides. Crowding has led to conflicts, and, in some cases, diminished the enjoyment for users.

While throughout its 20-year history serious accidents have been few, a fatal collision of two bicyclists a couple years back brought the issue of conflicts to the forefront. Sadly, police records show that one cyclist was traveling at a very high speed, crossed to the wrong lane and struck the victim head on. 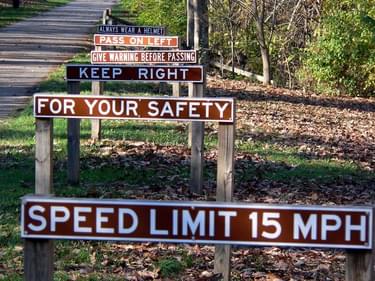 In the aftermath of this tragic event, trail managers, law enforcement personnel, and other officials and experts convened a forum to address ways to reduce conflicts and promote safer trail usage. This initial gathering led to a metro-wide safety forum that now meets quarterly. The group proposed and implemented the following efforts to help mitigate the conflicts:

1. The managing agencies posted 15-mph speed limit signs along the length of the trail.

2. The City of Littleton has imposed a court summons for bicyclists found to be exceeding the speed limit or riding in a dangerous manner. Judges may impose harsh penalties where extreme recklessness was reported. Rangers and sometimes Littleton Police now patrol problem areas on bicycle to warn violators and issue tickets.

3. The managing agencies installed a painted centerline along the trail.

4. A new granular stone (crusher fines) side path was installed running parallel to the paved trail open to pedestrians and wheelchairs only. Careful attention was paid to detail to attractively separate the paths, maintain the landscape character of the greenway and minimize migration of gravel from the side path onto the paved path.

5. A bicycle "traffic-calming" system was installed at key entry points to high traffic and potential high-conflict areas to encourage cyclists to reduce speeds and remind them they are in a congested area. This consists of signed "bicycle roundabouts."

The "traffic-calming" modifications are newly implemented this year. The jury is still out on how successful it will be, though the South Suburban Parks and Recreation District Rangers say that conditions have improved. They say they have been pleased with the dual trail and roundabouts and believe this has led to less accidents. According to the rangers, there has been one incident where a cyclist accidentally rode into a roundabout and was quoted to have said: "Gee, I guess this means I'm supposed to slow down." 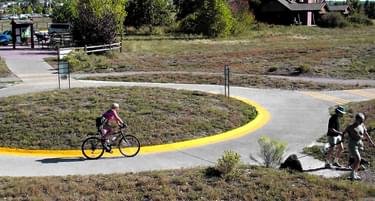 Early anecdotal evidence and observations seem to indicate public acceptance of the measures, though a number of pedestrians have been observed walking on the concrete trail rather than the soft-surface side path. While roller skaters, mountain bikers, and pedestrians appear to be accepting the measures, some road bikers have objected. The Metro Denver Trails Safety Forum will continue to monitor the results of the new policies and programs and welcome any comments, suggestions, or successful examples. 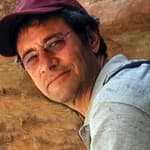 John Pflaum has over 36 years of experience in the planning, design, and construction of multi-use drainage and flood control improvements. His projects have included project management and engineering for the $8.6 million multi-use Little Dry Creek Flood Control and Greenway Improvements in Englewood, Colorado, and numerous Greenway projects that combine trail design with stream stabilization measures. His collaboration with DHM Design includes the Sand Creek Greenway, Purgatoire River Greenway and Bear Creek Greenway – all Colorado Greenway projects.