The Howard W. Peak Greenway Trail System in San Antonio currently boasts a total of 41 miles of completed trail and several more miles of trail under construction and in the design phase. 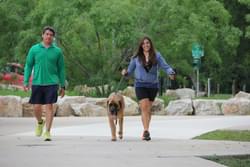 Voters in San Antonio have agreed to tax themselves to protect the Edwards Aquifer and build a network of trails and parks along streams in the region. Over 40 miles of trails have been completed through the Linear Park Creekway Development Program which is funded through sales tax approved by voters in 2000, 2005, and 2010. Approximately 1,200 acres of property along San Antonio Creekways have been acquired for the program since its inception. Sales tax revenue has enabled the protection of 96,000 critical acres above the aquifer, both through land purchases or conservation easements.

The sales tax initiative originally approved by voters in 2000 raised $20 million, enough to fund 11 miles of trails. In 2005, Peak led a campaign to renew the tax for $45 million to add 38 miles of trails and again in 2010, the voters approved the continuation of the sales tax designation to build an additional 30 miles of trail. The trail systems funding to date incorporates 89 miles planned trails in an overall system goal that could ultimately yield 130 miles of hike and bike trails along the creekways.

The trails along several stream corridors throughout the city offer easy access for healthy recreation opportunities from multiple trailheads and points of access. The trail system is currently transforming the way of life in the Metro San Antonio area by introducing and promoting the physical and practical benefits of recreational and commuter trail use. Residents of Texas cities are historically car-dependent. This Greenways initiative aims to preserve and enhance riparian corridors, enhance the public’s appreciation of nature and greatly expand the number of San Antonio residents who walk, ride, stroll, or skate for recreation. 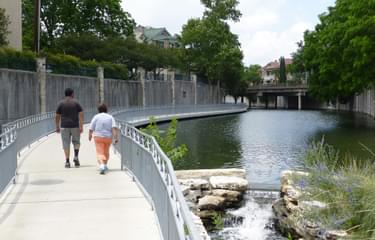 Boardwalks are needed for continuity of the Greenway; photo by Stuart Macdonald

“The trails, which are paved and ten feet wide in most locations to accommodate walkers, runners and cyclists, have been very well received and widely used,” Special Projects Manager Brandon Ross says.

“On any given day dozens of cyclists, hikers, walkers and joggers can be found recreating on the greenways. Parents also take advantage of the trail system to spend quality time recreating with their children and the trails are also heavily used for special events such as 5k runs and by numerous walking and running groups.”

As part of San Antonio’s ongoing efforts to increase opportunities for our citizens to stay active and fit, several of the trails provide easy access to park amenities and fitness opportunities, including new outdoor fitness stations. 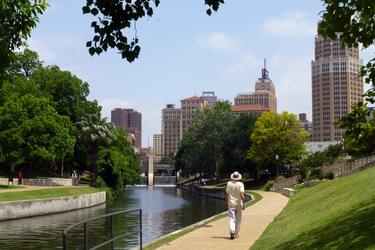 The San Antonio river near downtown; photo by Christie Jackson

Former Mayor Howard W. Peak began formulating the idea of a "ring' of hike and bike trails in flood zones along city-owned creeks while working in the City’s Planning Department and while serving on the Zoning Commission. As a City Councilman representing District 9 from 1993 to 1997, he partnered with Councilman Lyle Larson to purchase the land which began the trail system in Walker Ranch Historic Landmark Park.

As mayor from 1997 to 2001, he solidified his vision of hike and bike trails along Leon and Salado Creeks and won citizen support to dedicate one-eighth of a cent of the sales tax to begin development of the trail system in partnership with the Edwards Aquifer Program. This February and March, over 120 advocates virtually hiked the halls of Congress to call for action to protect and expand access for all to public lands and trails. These efforts, led by the Partnership for the National Trails System and American Hiking Society, developed a series of common messages and legislative priorities for the coming Federal fiscal year. We encourage all of our partners to download the Hike the Hill materials now to help build a common agenda for the entire trails community. 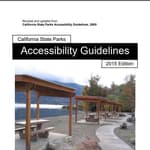 The Accessibility Guidelines are intended as a reference manual and department policy on accessible design and shall be utilized in planning and implementing regular maintenance activities, construction projects, publications, exhibits, new programs, and special events. The guidelines are not a comprehensive set of requirements for all situations, but rather a summary of information from many sources which provide guidance for common uses in the State Park System. This document is an update to the 2009 edition. 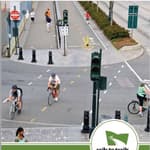 American communities today are at a crossroads. For the past 70 years, the automobile has been the dominant mode of transportation and has received the lion’s share of federal and state transportation investment. Engineers have prioritized maximum car throughput and free-flowing speed or level of service as markers of transportation efficiency and success. Now, communities across America are looking for ways to strike a better balance so that residents might have more transportation choices and a higher quality of life. Multimodal transportation systems that prioritize human-centered mobility are in high demand.