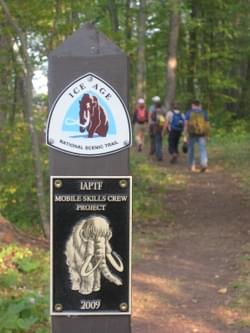 The IAT Triad was formed to help the three managing bodies of the IAT work more efficiently and to the best of their strengths. The National Park Service provides funding through the Challenge Cost Share Program (a matching funds program that IATA matches with more than enough volunteer service), and leads most planning efforts for the trail. The Wisconsin DNR leads land acquisition for the IAT, provides funding, and owns and manages much of the lands where the trail exists, or will exist. The non-profit Ice Age Trail Alliance focuses on maintaining and building the trail, largely through volunteers. Outreach, education, and volunteer coordination are where the IATA excels. The Alliance’s ability to organize and keep busy thousands of volunteers is a huge asset for the Triad.

The Ice Age Trail Triad Partnership is nominated for a 2010 National Trails Partnership Award primarily because of the outstanding work of the Mobile Skills Crew (MSC), a program of the Ice Age Trail Alliance which is supported by all three Triad partners, as demonstrated at the Wisconsin DNR’s Straight Lake State Park.

The Straight Lake area conserves a rare combination of natural features in an atmosphere of solitude and remoteness. Unique features include scenic undeveloped waters, large blocks of oak and northern hardwood forest, ephemeral ponds, basalt outcroppings and what has been described as the finest example of a glacial tunnel channel in the Midwest— the Straight River. In the early 1990s, the Triad undertook a regional evaluation to determine a general route between existing off-road segments in the northwestern region of Wisconsin between Interstate State Park in Polk County and the Tuscobia State Trail in Barron County. The Straight River and Straight Lake area was determined to be the most significant Pleistocene landform of the region. By fall 2009, nearly 80 miles of Ice Age Trail existed where none had before and the Ice Age Trail partners had succeeded in acquiring approximately 3,400 contiguous acres in the Straight Lake project area. 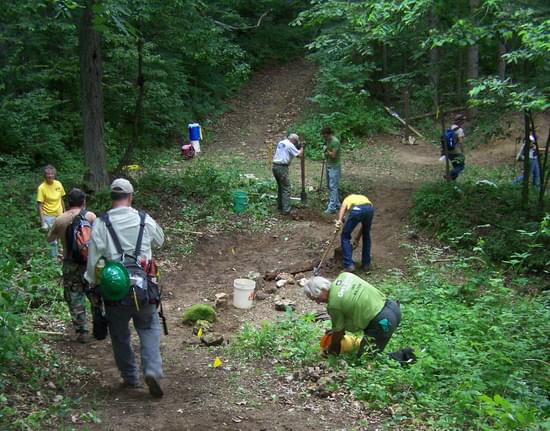 Volunteers working on the trail

In 2010, an AmeriCorps National Civilian Community Corps (NCCC) team came to Straight Lake for a six-week term of service beginning in late April, and a second NCCC team is expected in July. The NCCC is a federal team-based national service program for men and women between the ages of 18 and 24. Team members serve a fulltime, ten-month term and travel to multiple locations nationwide. Corps members are recruited nationally and are from different social, cultural, socioeconomic and educational backgrounds. In May, 2010, the NCCC team joined 235 MSC volunteers (who contributed 4,623 hours) to build more than 250 feet of sinuous boardwalk, construct more than 2,000 feet of difficult tread, prepare and serve more than 1,200 meals, craft a native rock crossing across a jumbled boulder field and manage camp duties.

Building and maintaining a strong volunteer base is paramount to the success of the Ice Age Trail. MSC projects accomplish this by having adults, school kids, and all kinds of folks come out and work to help lay the foundation for future volunteers and to promote a greater appreciation for the Ice Age Trail. The projects take place around the state, energizing new areas and getting positive media attention through local newspapers and TV stations. Everyone who attends an MSC event and works in the field is trained in the art and science of sustainable trail building, creating a statewide network of experienced and educated volunteers.

Starting in 2002 with the first volunteer training, the MSC program has grown thanks to the efforts of the IAT Triad. In 2008-09, 34 crew leaders were put through a rigorous five-day course to become expert trail builders and crew leaders. With the stable of knowledgeable and proficient crew leaders, it’s been easier to build and maintain premiere, sustainable trail that is fitting of a National Scenic Trail. In the last two years, volunteers from Wisconsin and beyond have contributed over 31,000 hours during the MSC events. The events run monthly from May to October, encompassing rain, snow, heat and cold and whatever the Wisconsin weather has to offer. Volunteers keep coming back and even growing in numbers.

In keeping with our mission, the DNR is dedicated to working with the citizens and businesses of Wisconsin while preserving and enhancing the natural resources of Wisconsin. 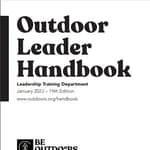