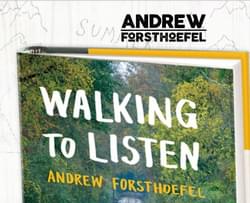 Walking to Listen: 4,000 Miles Across America, One Story At A Time, 2017
By Andrew Forsthoefel

Such a simple idea— slow down, walk, and listen. In 2011, at age 23 Andrew Forsthoefel set out on a walk across America with a backpack, an audio recorder, his copies of Walt Whitman, Khalil Gibran, and Rainer Maria Rilke, and wearing a sign on his back that said, “Walking to Listen.”

The idea was to get people curious and hopefully they’d stop and share a story or a piece of advice. During his eleven months on the road he interviewed thousands of people and ended up with over 85 hours of interviews on audio tape.

When asked why he decided to use audio instead of video he said “It’s less intrusive, and it’s only the person’s voice. There’s something about audio/radio that gets into you. The listener can make it their own because it’s this dreamy transference of one person into another. You can’t see the face and so you’re sort of imagining it.”

He didn’t set out to produce a radio documentary— that came much later after his walk ended when he met Jay Allison, a producer for Transom and they put together an hour-long program (give a listen at Transom.org/
2013/walking-across-america-advice-for-young-man).

Andrew walked over 4,000 miles from his home in Chadds Ford, PA to New Orleans, LA and to San Francisco, CA. His goals were to learn something about himself through self-reflection, to learn about his own behavior and beliefs, and also to learn about the lives and beliefs of the people he met along the way. Besides asking those he meets along the way to share pieces of themselves Andrew spent time reading the books he brought and mediating upon his own journey— his walk and his spiritual journey.

I love all of the wisdom people shared with him along the way and the many different points of view. He met so many people of different social status, race, and lifestyles and each one gave him a bit of themselves. His adventure is defined by the people he met.

One encounter he had that stood out to me, was when he was in Georgia and told Ernest Jackson he had to get going, and Ernest asked him to wait. Ernest rushed back into his shop and came out with a walking cane and when he held it out to Andrew he said “Remember me.” With his book and podcasts that is just what Andrew is doing— remembering.

While a student at Middlebury College in Vermont Andrew researched the concept of “coming of age” and how other cultures prepare their young to become adults. It’s not hard to see how this would shape the questions he asked people along the way. He would ask people what advice they might give to their twenty-three year old self. He knew that soon he’d be thirty-three, and then forty-three, and hoped people would help him through these questions and guide him into adulthood.

There is something about America and the personal journeys taken to discover its landscapes and human spirit that produces great authors and great literature. While reading Walking to Listen and then listening to Andrew’s podcasts I couldn’t help but be led to other books and interviewers.

I found myself going back and rereading Peter Jenkin’s Walk Across America (1979), Bill Bryson’s A Walk in the Woods: Rediscovering America on the Appalachian Trail (1998), Barbara Savage’s Miles from Nowhere (1983), and William Least-Heat Moon’s Blue Highways (1982). And reading for the first time Charles Kuralt’s A Life on the Road (1990) and America (1995), and John Steinbeck’s Travels with Charley: In Search of America (1962).

It was winter time in the mountains of North Carolina and I became engrossed in these books about travel and the people the authors met along the way. The modes of transportation didn’t seem to matter (walking, bicycling, driving) but each author experienced a unique piece of America when they slowed down and interacted with the landscape and people. There were so many more books to read, but spring was fast approaching and I found myself wanting to get back on the road and back to biking more trails. It was time to put the books away and hit the trail.

I enjoyed reading about walking, but I’m not really a walker. I was born with club feet and had the good fortune to have an excellent doctor who after a few surgeries straightened my feet enough for me to walk without a noticeable limp. But it can get rather painful if I walk long distances.

I’m more of a bicycle rider. Which means I usually bicycle around Black Mountain, NC where we live or drive (local or cross-country) to ride rail trails or mountain bike trails. For me bicycling is the perfect compromise between being slow enough to stop if you want to but quick enough to cover some distance if you want to. You carry all your gear on the bike and it doesn’t hurt your feet quite so much. And you have the added benefit of meeting some really great people on the trail and while camping.

As far as interviewers go I rediscovered Studs Terkel. I had heard Studs on “Prairie Home Companion” a few times and really enjoyed his voice and style. Over the course of his 45 years (1952-1997) on WFMT radio in Chicago Studs discussed every aspect of 20th Century life with movers, shakers, artists, and working folks.

The Studs Terkel Radio Archive website contains over 9,000 hours of radio and book interviews— 5,000 plus stories (check it out at studsterkel.wfmt.com). I picked a few interviews from each decade and found them really enjoyable and informative. I’m looking forward to listening to more.

These days most authors also have a website and blog. While on his cross-country trek Andrew had a website titled “Walking to Listen,” and today his website is “Living to Listen” (check it out at livingtolisten.com). Andrew is a featured speaker around the country where he speaks about his Walking to Listen journey as well as focused talks on “Listening: A Path to Peace” (activism, leadership, and as spiritual practice) and “Coming of Age: Journey to Adulthood.”

To put it simply Andrew Forsthoefel walked across a continent to listen to strangers and learn from them. He started talking to people about their lives and, sometimes, what their lives had taught them. He’d ask people about the idea of home, aloneness, family, love, death, and all sorts of stuff. Thanks to his focused story-collecting and reflective nature, his book is packed with a diversity of human experiences and wisdom.

As with much of the best travel writing, it’s the voice of the author that make readers want to stick with a writer over a long journey, and Andrews voice has an honest and disarming candor that accounts for much of the book’s appeal. Reading is a form of “listening” that I hope you enjoy as much as I do. I look forward to listening to your adventures and journeys as you offer them in future issues of American Trails.

Walking to Listen: 4,000 Miles Across America, One Story At A Time 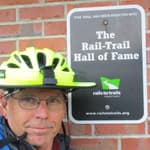 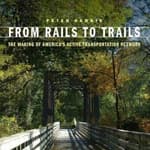 Book Review of From Rails to Trails: The Making of America’s Active Transportation Network

This book covers the political, cultural, transportation, design, and land-use issues that have shaped the rail-trail movement. 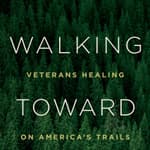 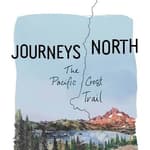 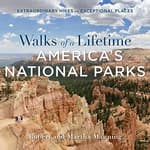