By Donald L. Greer, Ph.D., University of Nebraska at Omaha 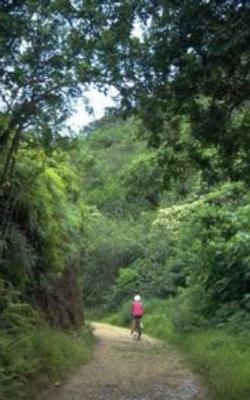 Some of the key findings include:

Another 35 miles of trails are scheduled for completion within the next eight years, and trail planning has become a continued feature of the urban and suburban park master planning process. Resources for this rapid development have come from a variety of sources, including the City of Omaha, Douglas County, and the Papio-Missouri Natural Resource District.

To address these concerns, this research sought to examine the impact of the existing trail system, focusing on residents living within one-block of each of three targeted trail segments. Trail selection was accomplished by consulting with the Omaha Parks and Recreation Department. Criteria included the desire to examine trails in areas of the city with old and new housing, short versus long term existence of the trail, and trails that are connected to the system versus trails not yet connected.

Following the method of much previous trail research, a survey was designed addressing three distinct issues of interest: property values, public safety, and trail use. Using both telephone and mail survey methodology, we asked residents living near the most heavily populated segments of the West Papio, Keystone, and Field Club Trails about the trails' impact on public safety, property values, and general neighborhood quality of life. Recognizing that all households in these areas might not be trail users, we also included questions about the frequency and type of trail usage by household members.

Influence of Trail on Home Purchase or Sale:

Theft (4.0%) and property damage (4.7%) were reported infrequently by respondents and most of these incidents were of relatively minor nature. Most security improvements mentioned consisted of building privacy fence or installing security lighting around the home. These security measures were deemed successful in all but one of the reported cases.

Residents expressed the opinion that the trails had improved life in their neighborhoods. There was little indication of a harmful impact except for three respondents, all located on the Keystone Trail, who reported a decline in the neighborhood due to the trails. Their resentment appeared to be associated with the development of a controversial skateboard facility in a park adjacent to the trail. Only one respondent out of 149 wanted to see the trail along their property closed. Only two have ever considered moving but they are the same respondents who did not care for an adjoining skateboard facility.

These data leads us to conclude that trail development in Omaha, Nebraska has been well received by residents who live adjacent to the trails, the very group who would be most directly affected by trail-related problems such as crime and declining property values.

Results were not dissimilar to the findings of previous comparable studies. By-and-large, the trails seem to be viewed as desirable quality of life enhancements that, despite their occasional problems, make homes and property more desirable and improve the quality of neighborhood life. Even so, there were signs in our data that the use and acceptance of recreational trails may differ depending on the demographic characteristics of the surrounding neighborhood.

The most positive responses to Omaha trails were found in the neighborhoods surrounding the West Papio Trail. Trail development has occurred more or less simultaneously with the construction of newer housing, and where home prices are higher and the educational and occupational backgrounds of residents are likely to be higher. The average age of adults may be lower, and the number of children per household may be somewhat greater, in that region of the city.

In the older sections of Omaha near the Keystone and Field Club Trails, we found that the trails generated a more guarded optimism. This may be attributable to a number of factors. For example, homes in these areas are generally very modest in size and price, reflecting lifestyle trends that are decades old. Owners of these properties may well recognize that the future marketability of their properties is somewhat limited, no matter what amenities are added.

Although we have gone to some length to achieve acceptable methodological rigor in this investigation, a few of its limitations should be mentioned in closing. The purpose of this investigation was not to establish an absolute or "true" increment of value that results when residential property is located next to a trail. Rather, we only sought to determine whether or not a subjective effect on property value exists in the minds of residents. This finding is consistent with the results of other recent surveys in Omaha and Council Bluffs (Omaha Master Planning Survey, 1998; Council Bluffs Master Planning Survey, 1999). Findings showed a substantial number of randomly selected respondents reported that they would pay more for residential property located near public parks and recreation facilities.

Finally, a decision that may strike some as a significant limitation was the selection of our sample to cover only residents living in close proximity to the target trails. We can defend this decision on a number of grounds. Persons living near trails, whether users or nonusers, are the most likely to be aware of the safety and economic issues that were central to our purpose.