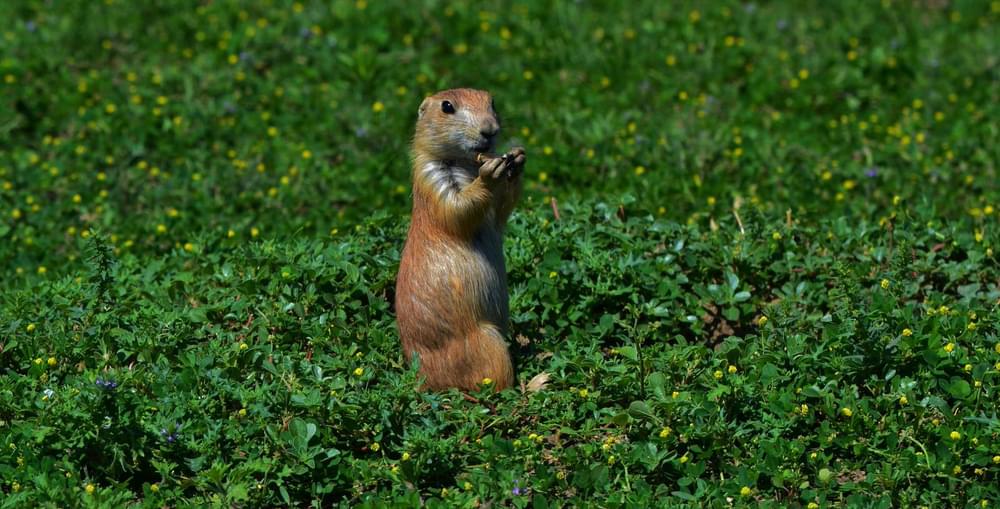 Smith's Island Nature Trail is a one-mile trail located near Pleasant Valley. The trail is a naturalist's paradise, hosting oaks, woodland wildflowers, and Sugar Maple, as well as herons, osprey and pelicans. The trail is recognized for its unique wildlife and its value to the community as an educational and recreational entity. Although the Smith Island Trail is only one mile in length, it encompasses approximately 25 acres and is located along lock 14 in the Davenport/Le Claire area. The Army Corps of Engineers also conducts various community-related events such as; fishing clinics, annual family clean-ups, and ECO-MEET, an educational program developed for younger-aged school children. The park currently functions as a Nature Preserve and Education Area. Learn more... 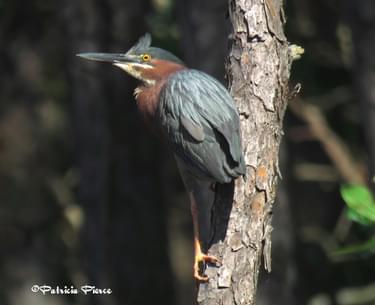 Named one of the top four locations in North America for viewing spring migrations, Dauphin Island consists of 164 acres of maritime forest, marshes, and dunes, including a lake, a swamp and a beach. An incredible 347 species have been reported on the island. Spring migration is the first landfall for many Neotropical birds that make the 600-mile flight across the Gulf of Mexico from the Yucatan Peninsula. Under adverse weather conditions, large flocks of exhausted birds of many species may seek shelter on the Island in a truly spectacular "fall-out." The Island has also been cited as one of the ten most globally important sites for bird migrations. The trails found in the Dauphin Island Audubon Bird Sanctuary are a family oriented pathway that provides a safe non-motorized way to explore the Island's best treasures, all while exercising, relaxing and enjoying the Alabama Gulf Coast. Learn more...

The Urban Wilderness South Loop Trail lies within the 1,000-forested acres along Knoxville’s downtown waterfront that includes ten parks, more than forty miles of recreational trails, incredible views and unparalleled natural features. The system is different from typical trails. Rather than a system of trails within a park, it is a system of trails that connects parks, public and private land. As such, the system offers a diversity of views, topography and scenery. The trails traverse dramatic 30’ tall rock outcroppings — remnants of an old limestone quarry — and weave around a brilliantly blue quarry lake, wetlands, sink holes, rolling farmland and sunflower fields. They climb through mature hardwood forests, woods abundant with wildflowers, and exit surprisingly into a neighborhood though a bamboo thicket. They provide a gentle ride along the Tennessee River and through a nature center. The entire system is well signed with four trailheads with informational kiosks, maps, and directional posts throughout the system. Learn more... 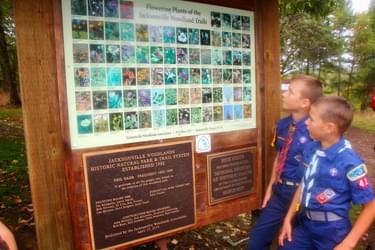 Cub Scouts working on a Tree Identification Badge at the Sarah Zigler Trailhead. Photo by Larry B. Smith.

The Sullys Hill Nature Trail is a scenic trail which gives the visitor a unique chance to walk through prairie, wetland and forest ecosystems not usually found together in North Dakota. From the trail the visitor has a chance to see mammals, birds, wetlands, woodlands, Devils Lake (the largest natural lake in North Dakota), and native grasslands. In 1904, Sullys Hill National Game Preserve was set aside by President Theodore Roosevelt. At Sullys Hill, The U.S. Fish and Wildlife Service focuses its efforts on preserving wildlife and their habitats and offering wildlife-oriented recreation. The wooded, glacial moraine hills and native grasslands of Sullys Hill are a unique setting in North Dakota. In addition to seeing bison, visitors can observe elk, white-tailed deer, and black-tailed prairie dogs. Learn more... 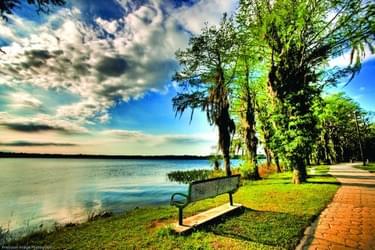 Lake Jackson is a 500-acre natural lake situated on the Alabama/Florida line. A study conducted in 2005 by the State Geologists determined that Lake Jackson is not a spring fed lake but rather a prehistoric sinkhole dependent totally upon rain for its water supply. Birds naturally love the lake and understandably, Lake Jackson is getting attention from bird watchers across the nation. Lake Jackson is home to at least one pair of bald eagles, and the occasional heron graces the shores. It is also not unusual to witness a mother duck crossing with as many as sixteen chicks trailing behind. In addition to the birds, alligators also call Lake Jackson home. Learn more...