Dedicated volunteers are working to improve and complete the trail that runs across seven northern states. It is fitting that in a year with so much history American Trails is gearing up to hold the next International Trails Symposium in one of the oldest states in the nation.

New York was, as we know, one of the thirteen original colonies, before America was even a country, and when all trails were equestrian trails. New York is also famous as a melting pot, and the place, more than any other, which has welcomed people from across the world to America’s doorstep, as millions made their way through Ellis Island to become part of our history.

We are proud to continue this tradition of welcoming those from across the globe to New York at our 2019 symposium, which will include scholarship students from all over the world. Of course, the biggest piece of history we will be celebrating at the upcoming symposium will be the National Trails System Act turning 50, and how that legislation has shaped our country’s trails since President Lyndon Johnson spoke these memorable words.

“The forgotten outdoorsmen of today are those who like to walk, hike, ride horseback, or bicycle. For them we must have trails as well as highways... Old and young alike can participate. Our doctors recommend and encourage such activity for fitness and fun.” 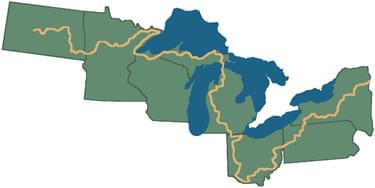 Syracuse, our host city, is lucky enough to have one of the trails that was created by the Trails Act just a short drive away. The North Country National Scenic Trail (NCT) was established in 1980 by an amendment to the Trails Act, and is well worth the visit from the symposium site.

In 1981 the North Country Trail Association was established, and it continues as the overall nonprofit to develop, maintain, protect, and promote the NCT.

One of the best ways to visit the trail is by checking out the Trail Town of Canastota, about 25 miles east of Syracuse, where the NCT passes directly through downtown. This spot serves as both a respite for thru-hikers and a jumping-off point for day hikers wanting to get a feel for the trail.

Although the NCT isn’t as talked about as some other long-distance hikes, such as the Appalachian Trail or the Pacific Crest Trail, it is just as majestic. It starts in New York State, but stretches 4,600 miles along the northern tier of America, not stopping until it reaches the middle of North Dakota, in what feels like a completely different world than where it began.

Like other long-distance trails, there are large gaps where the trail is yet to be completed or connected, but the North Country Scenic Trail Association boasts a network of 39 chapters, partners, and affiliates across seven states who are devoted to seeing this trail to completion.

The Central New York Chapter of the Association has over 140 members, and they maintain their own Facebook page and meet-up group to stay active in the sections of the trail around the Syracuse and central New York area. The group coordinates everything from bird watching expeditions and recreational hikes to work days, and is invaluable to keeping the trail experience so beautiful. Salmon Creek Falls on the Finger Lakes Trail portion of the NCT near Ithaca, New York 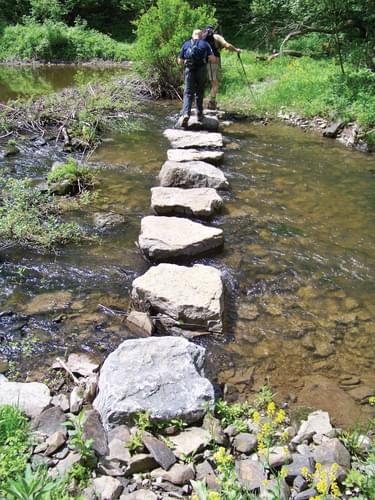 There are many ways that visitors experience the NCT:

For those who are in Syracuse in 2019 for the American Trails International Trails Symposium, don’t miss the perfect opportunity to visit the North Country National Scenic Trail as we celebrate the 50th Anniversary of the National Trails System Act.