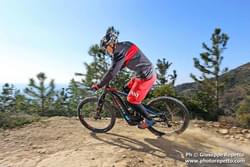 While the popularity of pedal-assist electric bikes (eBikes) generally is growing, electric-mountain bikes(eMTB) have not received a warm welcome by many within the mountain biking community. Anecdotally, a variety of concerns have been raised concerning eMTB use, including trail damage, trail conflict, decreased trail access, and the perception that eMTB use is not “real” mountain biking or is “cheating.”

Three predominant themes emerged: What is an eMTB?, Trails, and How should eMTBs be used? There was general confusion about the features and capabilities of eMTBs except by those who had previously used one. Commenters expressed concern over a variety of trail-related issues, including that eMTBs will damage trails similar to the way motorized vehicles do and that they could cause restricted access to some trail systems. There were inconsistent opinions on the use of eMTBs, where some comments saw riding mountain bikes as a “rite of passage” and that using an eMTB was “cheating”.There was some level of acknowledgement that eMTBs may be useful for promoting exercise, but this was mediated by the“rite of passage” belief.

These findings confirm general attitudes around eMTBs including fears, concerns, and prejudices. This study includes insights that will be useful in efforts to promote eMTBs for recreation, a tool to increase levels of physical activity, and in discussing potential conflicts about trail use.