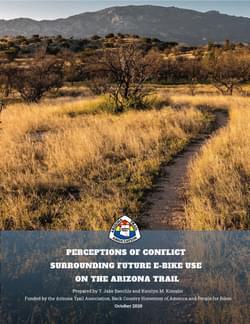 The majority of e-bike related research has taken place on city streets, often outside of the United States, and has focused on e-bikes as a form of transportation with recreation as a secondary function. This type of research provides little insight into the potential outcomes from the 2019 U.S. Department of Interior (DOI) Order 3376, which may allow e-bikes to be used on non-motorized recreational trails.

This study gathered opinions from individuals who were knowledgeable about and connected to the Arizona National Scenic Trail (AZT). Comments were solicited in reaction to Secretary Bernhardt’s e-bike statement via the Arizona Trail Association (ATA) Facebook page and the ATA email newsletter. Quantitative data was collected by way of an online questionnaire and distributed via the Arizona Trail Association (ATA) Facebook page, the ATA email newsletter, as well as the email lists for Arizona members of People for Bikes and Back Country Horsemen of America. The questionnaire asked about e-bikes and their use on the AZT. The analysis aimed to better understand how survey respondents’ most frequent method of travel, exposure to e-bikes and other factors shape their opinion of this new user group and where there may be potential for user conflict. Our findings only reflect the opinions of our pool of participants and should not be assumed to represent the opinions of Arizona Trail users at large.

The majority of respondents disapproved of e-bikes being allowed on the trail. This sentiment remained true across the board for each of the major user groups; however, mountain bike riders surveyed were less likely to disapprove of allowing e-bikes on non-motorized trails, and equestrians surveyed were more likely to disapprove. Findings also showed that experience with e-bikes improved tolerance for e-bike use on non-motorized trails amongst survey respondents, but on average exposure alone was not enough to create favorability. Survey responses also strongly suggested a polarized divide between the pro-e-bike and anti-e-bike camps, where both sides are highly reluctant to sympathize with the opposing camp’s argument, which could lead to conflict.