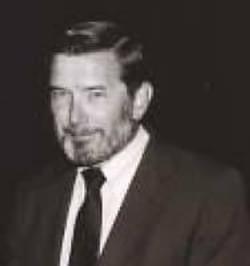 Lu Schrader, trails advocate and founder of the the West Virginia Trails Coalition

Lu Schrader, trails advocate and founder of the the West Virginia Trails Coalition

The West Virginia trails community lost a great advocate on November 8, 2001 when Lu Schrader passed away. I first met Lu when he retired from C&P Telephone Company and began working for the American Lung Association of WV.

Lu became the chief fundraiser for the Association and, as such began coordinating the Allegheny Trek For Life And Breath. He coordinated this event for several years and during that time he became more closely involved with the WVSTA.

I met Midge, Lu's wife, soon after I met Lu, because we all shared an appreciation for nature and, consequently, found ourselves hiking together and introducing one another to other nature enthusiast friends of ours. The Schraders were the first private landowners to offer their property as a host for the Mary Draper Ingles Trail.

After leaving the American Lung Association, Lu began earnestly seeking a way to bring various trail interests together into an association that would, in Lu's vision, wield greater political power for trails issues in our Mountain State.

This effort to find unifying principles among various trail groups led Lu to co-found the WV Rails-to-Trails Council. Lu's vision for the Council included establishing a network of abandoned railroad based trails that would be suitable for various trail uses.

After in-fighting in that group threatened to burst the Council at the seams, Lu left the naysayers to squabble amongst themselves and forged a more inclusive trails organization that survives today, the West Virginia Trails Coalition (WVTC). In this role, Lu more than any other individual, was responsible for ensuring the American Discovery Trail became routed through West Virginia.

While laying the groundwork for the WVTC, Lu served the WVSTA on the board for a few years, including a two term stint (4 years) as Vice President while Yours Truly served as President. During this time, Lu kept WVSTA informed of statewide trails issues and opportunities, and he helped ensure WVSTA's thorough involvement with this visionary organization. Several projects of the WVSTA have had essential support from the WVTC, thanks to the close cooperation between the two organizations nurtured by Lu.

After Dianne and I wed, Lu & Midge had us over for supper several times where we met some of their family members, ate some great food, pondered the intricacies of the Creation and discussed trail issues. Many times Lu and I discussed the difficulties of running an umbrella trails organization when the component interests included a variety of trail advocacy groups that often focused on divisive issues instead of on issues we could all agree on.

Early on it was obvious that some hikers didn't like mountain bikes on "their" footpaths; some bikers didn't want ATVs on "their" dirt trails; some horseback riders didn't want anybody else on "their" bridle paths spooking their mounts and complaining about horse s--t; and ATV drivers were very defensive/offensive about "noise" and "rambo" issues. Lu often expressed his gratitude for the WVSTA acting as an anchor of support and stability in this storm of various trail interests.

Lu also served as an anchor figure. When others were hurling insults because of perceived infractions on their turfs, Lu remained polite and calm, never forgetting the humanity (flawed yet gloriously gifted) we all share. He steered the WVTC through some rocky rapids to finally establish it as the trails advocacy organization best suited for leading the effort to establish a grassroots-supported statewide trails plan.

The executive summary of the plan was completed this year and the plan is now being implemented. The WVSTA is already benefiting from the plan. Even as I type this eulogy, a National Civilian Community Corps crew brought to WV by the WVTC prepares to maintain the Allegheny Trail in Monroe County and eagerly plans to work with the WVSTA and the WVTC on ALT projects next year as well.

Lu was a humble man, not at all concerned with receiving credit for an accomplishment as long as the accomplishment was uplifting of his fellow human beings. He would shy away from the few accolades I will now proffer, but say them I must. Thanks to the untiring labor of Lu Schrader, the WVTC will continue to play a lead role in implementing the Statewide Trail Plan. Thanks to Lu's extraordinary vision for the Mountain State, West Virginia's trail system will become one of the best in the nation. Perhaps most important, thanks to Lu's personal faith and commitment to family, our trail network will be a legacy left to future generations. Until my memory is riddled by Alzheimer's Disease or some other illness of old age, I will remember Lu Schrader for all of this, plus one more thing ... he was a good friend. Thanks Lu!