The 3-mile long Kalaupapa Trail is the only access point in and out of the remote community of Kalaupapa on the Hawaiian island of Molokai. When a land-slide took out an old aluminum bridge, cutting off this access point, park officials looked to an FRP bridge for its light weight, corrosion resistance, and design flexibility. 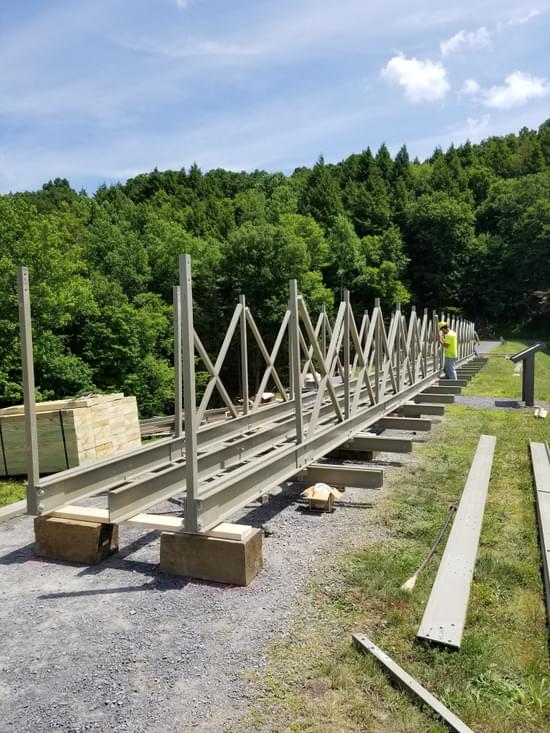 The new bridge for the Kalaupapa Trail in the process of assembly.

More than 10 million visitors travelled to the Hawaiian Islands in 2019 setting a new record according to statistics gathered by the Hawaii Tourism Authority. Formed by volcanic activity, the archipelago of eight major islands has more than 50 state parks that protect waterfalls, emerald mountains and white beaches along with the Pacific National Monument that houses the Arizona, Oklahoma and USS Utah Memorials in Pearl Harbor. Molokai, the fifth largest island, also has a historic park. But it wasn’t the 250-ft. Moaula Falls or a mule tour that rivals that of the Grand Canyon that captured the attention of Creative Pultrusions. It was a challenging trail bridge project with an interesting twist.

Kalaupapa, a small unincorporated community in Molokai, is home to the Hansen’s Disease Settlement. Established as a leprosy colony in 1866, the remote peninsula is still home to a few former patients who have chosen to remain. Access is strictly regulated. Kalaupapa is surrounded on three sides by the Pacific Ocean and cut off from the rest of the island by 1600-ft. sea cliffs. Settlement workers must travel the Kalaupapa Trail on foot or by mule. Three miles long, it hugs vertical cliffs and is made up of 26 switchbacks that weave in and out of canyons and ravines. There is also a small airstrip at the peninsula’s northern edge that supports daily deliveries of food, supplies and visitors. 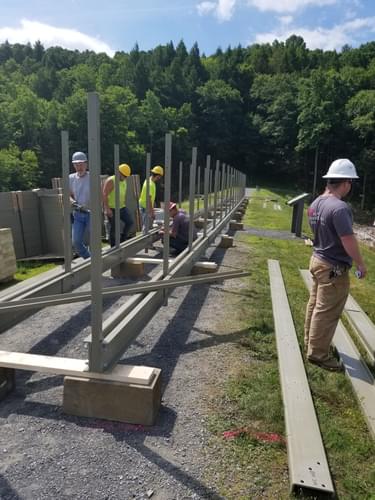 The crew works on assembling the bridge.

In 2018 a landslide took out a 65-ft. long aluminum bridge located on the trail’s second switchback. A postal worker discovered the damage on Christmas Day. The Kalaupapa Trail was closed for the second time in its long history. Eight years earlier, a mudslide damaged the original bridge prompting the park service to choose the high-grade alloy as a replacement. Faced yet again with the prospect of installing a new bridge in one of the most remote and inaccessible sites in Hawaii, park officials went looking for a lightweight, high-strength solution. In 2019 the park service chose an E. T. Techtonics fiber reinforced polymer (FRP) composite prefabricated trail bridge, a product line now produced by Creative Pultrusions (CPI). A long-time manufacturing partner of E.T. Techtonics, CPI acquired the company in 2016.

To prepare the work site for the new span, Park Superintendent Erika Espaniola said cleanup and removal of broken bridge segments “was quite an operation.” ”Personnel were tied in with ropes,” she noted. Once the crew recovered the pieces of the bridge, they hiked them off the trail. Concrete abutments remained intact.

Light weight, corrosion resistance and design flexibility proved to be the key factors that influenced the park service’s choice of FRP. CPI can fabricate E.T. Techtonics bridges in lengths up to 150 ft. and widths up to 12 ft. The truss design is structurally efficient and resilient and can be pre-assembled in the factory or at the work site. 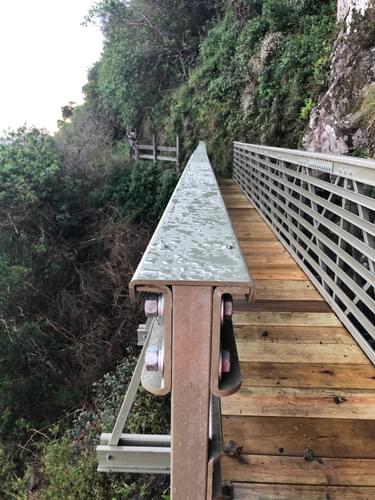 “We designed the bridge to meet 2015 international building codes,” says Creative Pultrusions’ Chief Structural Engineer Dan Winey, P.E. “Lateral winds typically control this type of design. Deck requirements called for a live load of 100 pounds per square feet. We prescribed a wood decking since the bridge is used by pedestrians and mule trains. We determined each mule weighed 1500 lbs. and would travel 6 ft. apart. The bridge can handle a train of up to eight mules.”

FRP bridges and walkways are custom made using structural profiles that combine resin and glass fiber reinforcements in a process that pulls the raw materials through a heated steel forming die using a continuous pulling device. Trail bridges offer a tensile strength ranging from 30,000 psi to 100,000 psi, yet are 80 percent lighter than steel. FRP also resists water, saltwater and pests like termites, making the material ideal for harsh environments.

Design flexibility allowed CPI to adapt the bridge to the park’s needs. “They requested a special color so we pultruded bridge components in olive green. We were able to modify the width of the bridge from 6 ft. to 4 ft. The truss bridge was 50.5 ft. long. The park service planned to helicopter the bridge to the installation site. We’ve helicoptered bridges up to 96 ft. long, but the company chose to fly the bridge in four truss sections. We added a splice to limit the weight of the pieces. The truss sections were connected once they were set in place.”

The bridge’s light weight and simplicity of design makes installation easy even in rugged scenarios like a cliff side. “Volunteer trail associations often install our bridges,” says Winey. “It’s all bolting. We provide assembly instructions and drawings.”

FRP bridge sections left the manufacturer’s Pennyslvania facility by truck on January 1, 2020. The composite trail bridge travelled by ship to Honolulu and was installed March 8, 2020. While Kalaupapa Trail is currently closed in compliance with COVID-19 restrictions, the composite span has restored a critical link for the community and its visitors. 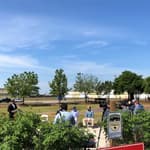 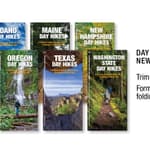 Created based on the idea that hiking is an activity that can—and should—be fun and accessible to all, these guides provide 20 family-friendly and wheelchair accessible hikes per state.