The Appalachian National Scenic Trail—commonly referred to as the A.T. and referenced throughout this document as simply the Trail—is a public footpath that traverses more than 2,100 miles of the Appalachian Mountains and valleys between Katahdin, Maine (northern terminus), and Springer Mountain, Georgia (southern terminus). The Trail winds through scenic, wooded, pastoral, wild, and culturally resonant lands along this ancient mountain range. More than 99% of the Trail’s corridor is protected by publicly owned lands.

The Trail has a celebrated grassroots origin. The A.T. idea gained momentum in 1921 with the proposals of Benton MacKaye, a regional planner from Massachusetts. He envisioned a trail as a means to preserve the Appalachian crests and to provide a retreat from increasingly industrialized modern life. The Trail was designed, constructed, and maintained in the 1920s and 1930s by volunteer hiking clubs, brought together by a volunteer-based nonprofit—the Appalachian Trail Conference, now known as the Appalachian Trail Conservancy. Formed in 1925 and based in Harpers Ferry, West Virginia, the Appalachian Trail Conservancy continues to work in partnership with the National Park Service, U.S. Forest Service (USFS), states, local communities, and a federation of 31 volunteer-led hiking clubs. This partnership, along with the Depression-era Civilian Conservation Corps, combined forces to open a continuous trail by August 1937.

The national significance of the Trail was formally recognized in 1968, when the National Trails System Act established the Appalachian National Scenic Trail as one of the first national scenic trails in the United States. Specifically, this legislation directed the National Park Service, in consultation with the U.S. Forest Service, to administer the Appalachian National Scenic Trail. The National Trails System Act was amended in 1978 to also authorize funds for the two agencies and the states to protect the entire route with public lands. Today, federal and state agencies remain important in the stewardship of the Trail, and volunteers maintain their long-standing and central role as the heart and soul of the Trail. 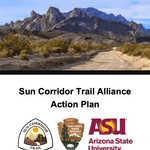 The Jeffco Trails Plan explores the path ahead for the future of all trails in Jefferson County, Colorado.