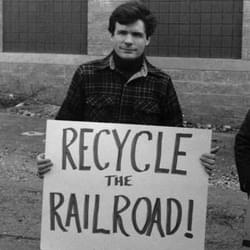 David passed away on February 1, 2017. His contributions had significant benefits for this nation and they provided a foundation of support for trails and greenways around the world. I will always remember David’s tireless quest and passion for transportation and climate policy reform.

I clearly remember the first time that I met David Burwell and Peter Harnik, co-founders of the Rails-to-Trails Conservancy (RTC) in Washington, DC. It was the Spring of 1988, and the RTC was a small startup non-profit organization with a handful of people. I immediately recognized that David was different from the rest of the trail and greenway advocates that I was working with at that time. David was intense; he was a visionary and he had an understanding of how to get things done. He was living and working in one of the most difficult places on Earth to accomplish things – Washington, DC. David was an optimist who never backed away from a challenge and always saw a successful path forward.

Prior to David’s co-founding of RTC, there was no national organization advocating for community based trails and greenways. There was no federal legislation that supported the planning, design and construction of trails. There was very little awareness that trails and greenways were important elements of transportation infrastructure and essential to the quality of life that millions of Americans enjoy today. That was before David Burwell came along and changed the conversation, changed the national focus and changed how we as a nation thought about the development of trails and greenways.

Peter Harnik said of his friend and colleague, “There was no one like David Burwell. He was a voracious learner and a fearless instigator. For David, no unexplored fact was too insignificant, and no challenge was too large. It was David who turned rails-to-trails from an idea with very good potential into a powerful national force backed by firm legal standing, true political muscle and undeniable financial backing.”

It was the Rails-to-Trails Conservancy, headquartered in Washington, DC, that in turn gave rise to American Trails (AT) and supported the vision that a national greenways and trails system could in fact be established from east-to-west, north-to-south, and within all 50 states. I served as inaugural Board Chair of American Trails when it was established in the fall of 1988. David was a key mentor and advisor during the early years of AT – which had been formed through the merger of the National Trails Council and the American Trails Network.

Hal Hiemstra, Vice President for National Policy of the Rails to Trails Conservancy from 1991 to 1998, appropriately reflected on David Burwell’s lasting legacy. “Communities across America – especially communities that were dying on the vine - are richer and better off because of the vision that David helped create and foster, and the hard work he put into making that vision a reality. David didn’t do this alone – there were many people that contributed to the success – but we all recognize David’s gifts and his vision and each one of us has led a more fulfilling life because of our friendship and interaction with David, and the opportunity to work alongside and with him during his efforts to make his vision a reality all across America.”

David had been ill for sometime with acute myeloid leukemia. One would never have understood how serious his illness was. David always had a can-do attitude. He did not dwell on his personal challenges for long. He was driven by a vision and mission to improve the world we live in. He always looked ahead with great optimism to solutions.

Ed McMahon, Senior Resident Fellow with the Urban Land Institute shared with me what so many of us feel about David -- both a sense of loss and how grateful we are for all that he contributed. “I will remember David Burwell as a good friend and a good guy, but more than that I will remember David as someone who left a legacy of 22,000 miles of rail-trails spanning the country. David was an extraordinary advocate, supreme strategist and tireless advocate for trails and Greenways, rural revitalization and a balanced transportation system. Thousands of communities have benefited from David's vision and his extraordinary work. He helped create a movement which benefits us all.”

What I will always remember about David was his tireless quest and passion for transportation and climate policy reform. The Rails-to-Trails Conservancy was a means to an end for David; it was a way in which he could carry out his vision and mission to save abandoned rails corridors for future transportation use. RTC was also the first in a series of challenges for David, as he later established the National Transportation Enhancements Clearinghouse, founded the Surface Transportation Policy Project, was a key participant in the Transportation Research Board’s Sustainable Transportation Task Force, and most recently, up until his death, was the director of energy and climate at the Carnegie Endowment for International Peace.

David lived an extraordinary life, for which all of us in the trails and greenways community have benefited. Thank you for your accomplishments and contributions David. We will miss your friendship, your wise counsel, your tireless energy and your passion for getting the job done right. Rest in peace. 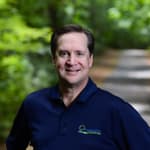 Chuck is an award winning author, planner and landscape architect who has completed work in 250 communities, in 37 states, and in 7 foreign countries. He is the recipient of four dozen national, regional and local awards. Some of his most notable projects include the Grand Forks Greenway Master Plan, North Dakota, Charleston County Greenbelt Program Master Plan, South Carolina, American Tobacco Trail Master Plan, North Carolina; the Miami River Greenway Master Plan, Florida; and the Grand Canyon Greenway, Arizona. Chuck is a Fellow in the American Society of Landscape Architects, and coauthor of Greenways. A Guide to Planning, Design and Development, and Trails for the Twenty First Century. His most recent book is entitled “The Greenway Imperative: Connecting Communities and Landscapes for A Sustainable Future” (University Press of Florida)