From The Robert Wood Johnson Foundation 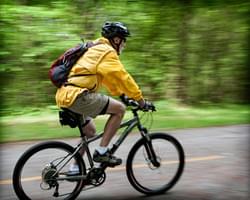 A panning shot of a bicyclist on the Silver Comet Trail; Rockmart GA; photo by Clara Williams

A panning shot of a bicyclist on the Silver Comet Trail; Rockmart GA; photo by Clara Williams

Recognizing the important role of physical activity in promoting healthier lifestyles, Active Living by Design and The Robert Wood Johnson Foundation (RWJF) announced today the selection of 25 partnerships across the United States to increase active living, a way of life that integrates physical activity into daily routines. Each partnership will receive a $200,000 grant to address community design, land use, transportation, architecture, trails, parks and other issues that influence healthier lifestyles.

"Community design and limited transportation choice often prevent people from leading physically active lives" said Richard Killingsworth, director of Active Living by Design. "These grants support innovative partnerships that will create places, programs, and policies that make physical activity something everyone can access and enjoy." In many communities throughout the United States, it is difficult to walk or ride a bicycle to work, school and other destinations.

Recent studies have suggested that neighborhood design and a lack of transportation options may contribute to obesity and inactivity. Recent national statistics show that nearly one in four American adults is sedentary and that the number of overweight children has doubled since 1980.

"The efforts of Active Living by Design are an important part of The RWJF's mission to promote healthy communities and lifestyles," said Risa Lavizzo-Mourey, M.D., M.B.A. president and CEO of RWJF. "We believe these partnerships and their proposed work represent the leading edge of a growing national movement to increase physical activity. As a result, we have a new weapon in our fight to curtail the growing epidemic of obesity and related health problems."

The focus of these efforts will be to develop community models that identify strategies can support the Surgeon General's recommendation of 30 minutes of moderately intense physical activity at least five days per week. Some of the proposed projects include:

Active Living by Design is a national program established to create, enhance and promote environments that make it safe and convenient for people to be more physically active. The goal of Active Living by Design is to encourage changes in design, transportation and policies to cultivate and support active living. The $16.5-million program is a national program of The RWJF and is based at the School of Public Health at The University of North Carolina at Chapel Hill.

The RWJF, based in Princeton, N.J., is the nation's largest philanthropy devoted exclusively to health and health care. It concentrates its grantmaking in four goal areas: to assure that all Americans have access to quality health care at reasonable cost; to improve the quality of care and support for people with chronic health conditions; to promote healthy communities and lifestyles; and to reduce the personal, social and economic harm caused by substance abuse: tobacco, alcohol and illicit drugs.