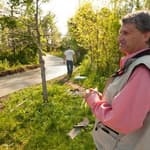 The organization maintains a membership of 1,000 members and is responsible for private fund raising, acquisition of trail easements; trail design; trail development and the creation of a land trust committee to work in preserving open spaces in Greene County. In addition to promoting local trail projects Ozark Greenways also manages the Frisco Highline Trial a 35-mile rail trail project in Greene and Polk Counties. The FHT is the second longest Rail Trail in Missouri.

From 1980 until 1995 Terry served as the Director of Parks and Recreation for the City of Fenton, Missouri in St. Louis County. A 1980 graduate of Southwest Missouri State University he holds a BS degree in Recreation & Leisure Studies. Terry is a current board member of American Trail and is a board member/past chairman for the Mississippi River Trail Association.