This award recognizes an outstanding partnership— outside of the United States— that enhances the trails movement within a specific country or countries. 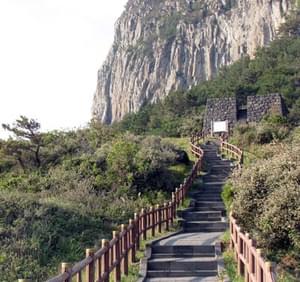 The Jeju Olle Foundation has demonstrated outstanding efforts to bring dialogue about long distance trails to an international level.

The Foundation has developed a walking trail around the entire volcanic island of Jeju, South Korea. The island, found just off the southwest coast of Korea, is Jeju Olle (pronounced OLE, the Jeju word translates to the narrow path from your door to an open space or gate).

Since its first opening in September 2007, the trail organizers have developed 26 trail sections or routes offering 422 kilometers of pathways. They are still working and searching for the most scenic trail path for travel along the Jeju coast. Jeju Island has become the first Korean natural heritage site to be added to UNESCO’s World Heritage List.

The story of the beginning of the path starts with founder Suh Myung-sook, a former journalist from Seoul who, after being called to a journey on the Camino de Santiago in Spain, came home to create a way for neighbors, friends and visitors from around the world to experience the natural wonders of her home in Jeju. With 11 staff (eight office and three exploration) and the support of the South Korean Central Government, the Foundation supported 14 trail representatives from around the world in November 2011 for the second ever World Trail Conference. The conference provided an opportunity for global conversation around trail issues from construction, design, and signage to conservation and cultural heritage. The Foundation took great effort to provide cultural exchange among the world’s trail associations, specialists and representatives in the industry. 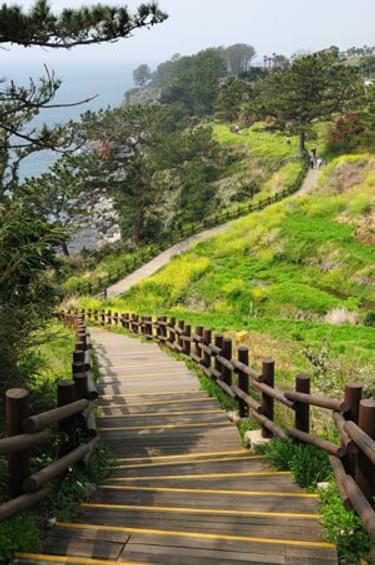 Representatives from some of the world’s most well-known trails provided presentations and conversation on topics such as: principals and legislation on trail development; environmental impacts within trail corridors, and the environmental considerations of trails, and social, and economic benefits of healthy ecosystems and trails. Funding strategies for land protection and stewardship was also discussed.

One of the outputs of the conference was the development of a World Trail Network that will serve as a vehicle to discuss current issues and common values of trails in the world and establish the trail industry towards sustainable development. The Jeju Olle Foundation has spearheaded to the development of the Network, providing opportunities for participants to meet and discuss common issues, challenges and avenues for building partnerships and sharing successes.

Laura Belleville, Appalachian Trail Conservancy Director of Conservation, participated in the conference and highlights the importance of global trail partnerships, “The promise of our international network of trails is our collective work to value and conserve unique experiences, and to put those opportunities out there for the next generation of explorers seeking experiences that ground their lives, remind them of the diversity of cultural and natural assets that enrich all of our lives, and hopefully, inspire that hiker to support our work to manage and protect these special places. Trail organizations working together at a global scale creates leverage to be heard. This network also offers the opportunity to learn from one another, to share unique cultural viewpoints.”

One example of an output from this network is a tangible partnership created on both Canada’s Bruce Trail and Jeju Olle’s Friendship Trails. A portion of the Bruce Trail in the Hockley Valley is twinned with Route 2 of the Jeju Olle Trail, and honors the international cooperation between the two countries and the two physical trails. “The linking of our two trails has led to information sharing and further connections with other trail organizations, thereby creating increased international dialogue and furthering the recognition and publicity of hiking trails around the world,” stated Jackie Randle, Director of Volunteer Programs of the Bruce Trail Conservancy. The Jeju Olle Foundation is also working with the Swiss National Tourism Office (“Wine Route” of Switzerland's Leman Lake) and Kyushu Tourism for a trail in Kyushu, Japan. These partnerships raise the awareness of their trails to a wider audience, reaching new demographics. The Foundation also supports an academy, teaching educational programs to train volunteers in the culture, history and ecology of Jeju. They are an organization committed to protecting, interpreting and enhancing their natural and historical resources for many to enjoy, for many generations to come.

The Appalachian Trail Conservancy believes that the Jeju Olle Foundation is an exceptional nomination for the first International Trail Award. Their contributions have demonstrated leadership in promoting and protecting the natural, cultural and recreational resources of international trails by working effectively with partners from around the world. Through their commitment of resources, leadership and initiative to enhance important dialogue among long distance trails worldwide, they are creating opportunities for partnerships and networking on a level that has up to this point been nonexistent.

As we know from the great resources that American Trails has provided, networking, workshops, presentations and information dissemination is important for trails to remain relevant and vital, and for our communities and ecosystems that we depend on to stay healthy and strong.