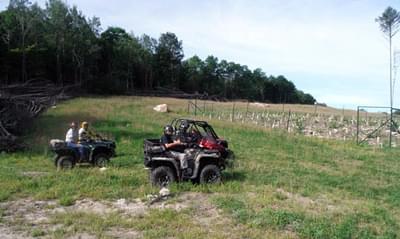 The Anthracite Outdoor Adventure Area (AOAA) consists of 6,500 acres of county-owned abandoned coal land whose trails have been developed into a motorized and nonmotorized recreation facility.

In January 2013, the AOAA Authority was presented with a unique opportunity when the Pennsylvania Department of Environmental Protection began a reclamation project on 85 acres on the eastern portion of the Adventure Area.

The vision for the AOAA is to provide “Recreation opportunities for off-highway vehicles, economic development, and conservation of natural resources.” The AOAA accommodates a wide variety of recreational opportunities. In addition to ATV and motorcycle riding, snowmobilers will enjoy riding when snow cover allows. The nonmotorized uses include horseback riding, bicycling, and hiking.

In developing the trail system, consideration has been given to providing separate trails where possible for different uses. Further, management and operational policies of the AOAA are focusing on efforts to educate all visitors, whatever their recreational interest, on trail safety. In addition, educational efforts will promote trail etiquette for every mode of travel and sharing the trails with others they encounter

In the early 1900s, the American chestnut tree, which once dominated 200 million acres of the Eastern United States, succumbed to blight and killed an estimated 4 billion trees. The loss of the American chestnut tree is cited as the worst ecological disaster of the 20th century. In 2013, the Pennsylvania Bureau of Mine Reclamation began a reclamation project on 85 acres on the eastern portion of the property of the Anthracite Outdoor Adventure Area. During the pre-construction meeting, plans were made to dedicate a portion of the reclaimed area for The American Chestnut Foundation’s breeding program and planting of seedlings began in April 2014.

Surrounding these plantings is an already grown wood lot of multiple tree species indigenous to Pennsylvania that will be incorporated into an educational walking trail. An informational kiosk will be available for all trail users in the trailhead area. The kiosk consists of three panels that explain the American chestnut’s importance on the East Coast to man and wildlife; the chestnut blight; and how The American Chestnut Foundation is working to restore the American chestnut to benefit our environment, our wildlife, and our society. Much attention has been brought to the planting area, and many of the visitors, whether on an all-terrain vehicle or in a full-size vehicle, will stop at this site to learn about the American chestnut’s plight.