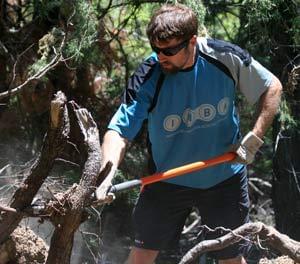 Bill Manning, the Administrator of the Colorado Trail Foundation, administers one of the premier trails in all the Americas— The Colorado Trail, a trail that runs for some 500 miles, from the outskirts of Denver, Colorado to Durango, Colorado.

The course of this trail takes those that walk, ride, or bike it, through the heart of what makes the State of Colorado a natural wonderland and a destination for so many in this country and elsewhere.

Moreover, the trail is a magnificent example of what cooperation can bring when trail user groups put their differences aside. One might even argue that this has been the case with the Colorado Trail from its inception--the very existence of the trail is a testament to what can be accomplished when differences are put aside and user groups work together for their mutual benefit. As you are likely aware, there are many issues that must be confronted when a trail moves from vision to accomplishment. In the case of the Colorado Trail, that vision has been accomplished.

This cooperative spirit still pervades— the 2008 National Trails Day saw the efforts of 100 plus mountain bikers, hikers, trail runners, and equestrians, cooperating with one another in the repair of Section One of the trail, running from Waterton Canyon to the Platte River, some 13 miles in distance. Unfortunately, one of mother nature’s spring storms a few seasons ago was powerful enough to bring down several hundred trees along the corridor of the trail. This, in turn, meant that the tree roots pulled significant portions of the trail up and out, leaving car-sized holes in the trail tread. Volunteers for trail work include equestrians, hikers, and cyclists

Mr. Manning and the Colorado Trail Foundation were the prime movers in once again bringing together a coalition of interests to benefit the trail. From the outset, the philosophy of shared-use, which has been the means to so much success on the Colorado Trail, was once again the order of the day.

Mr. Manning and the Colorado Trail Foundation created the necessary environment to insure that the that hikers, equestrians, and mountain bikers all worked together. The planning sessions were a study in the benefits of shared-use and the same cooperative spirit that brought the trail into existence. Notions and ideas were shared for accomplishing a gargantuan task— getting tools and supplies and personnel into the trail some 5 to 6 miles in, where no access roads existed, foreclosing the use of vehicles to haul in the heavy stuff. These meeting resulted in a plan to use the Colorado Back Country Horseman and their able horses to bring and cache the tools, along with water, and the mountain bikers and hikers supplying the necessary hard work to repair the trail.

On National Trails Day, the plan worked like a charm. The Back Country Horseman had previously cached the tools and supplies which allowed the mountain bikers and hikers to easily move up the trail the long distance to the root-ball problems. Those problems gradually disappeared over the course of an incredibly beautiful and rewarding day of hard work. This all ended with a grand BBQ that saw many smiles and the exchange of further ideas on this type of cooperation. There can be no better example of the benefits of shared use than its very exercise whether on the Trail or for the benefit of the Trail.

This philosophy of shared-use has meant great dividends to the Trail— not just in the manner in how the Colorado Trail is used but also in the very approach to resolving the problems inherent in maintaining and sustaining such a treasure. In this manner, and through their educational efforts, which are documented on the Colorado Trail Foundation Website, Mr. Manning, his board of directors, and his staff have been instrumental in ensuring that the Colorado Trail remains shared-use, to the benefit all the user groups who wish to enjoy the wonders and the beauty of the Colorado Trail. They have also extended their support of the shared-use philosophy to the Continental Divide Trail, another of the majestic trail opportunities which exist in Colorado.