This award is given to a partnership which benefits agencies or services within the field of trail planning, design, or implementation. Level One category: a partnership consisting of two entities. 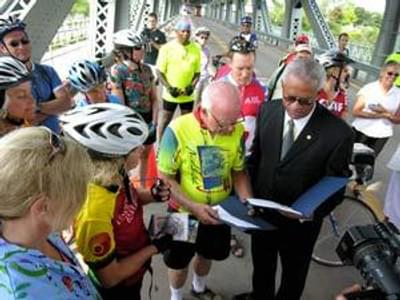 With the help of countless people, thousands of Africa Americans escaped from slavery by following various paths to freedom, hiding in the outbuildings and homes of sympathetic Americans along the way.

The route was developed through a partnership between Adventure Cycling Association (ACA) and the University of Pittsburgh’s Center for Minority Health (CMH). The concept of creating the route highlights this cultural struggle while also celebrating diversity and promoting health and recreation. Being recognized by a National Trails Partnership Award would highlight how our unique partnership was mutually beneficial. Our hope is that other trail organizations become inspired to engage health orientated or other non-traditional partners to broaden their approach and appeal to more American’s of all ages and interests.

The partnership was born in 2004 when the CMH, based in the University of Pittsburgh Graduate School for Public Health, was looking for innovative ways to promote physical activity in their outreach programs based in Pittsburgh. The ACA's proposal for a new long-distance bicycle route honoring the Underground Railroad sparked and the two organizations began discussion on how a partnership could mutually benefit their individual goals. 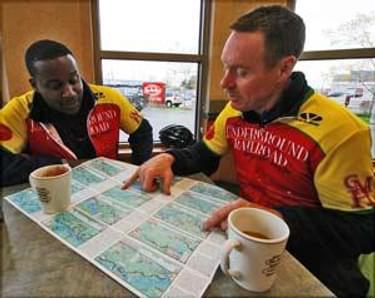 ACA’s mission is to inspire people of all ages to travel by bicycle, and explore the landscapes and history of America for fitness, fun and self-discovery. For over thirty years, ACA has provided the resources for bicycle travel. However, ACA is keenly aware of missing populations in bicycling and, more specifically, bike travel. According to the Outdoor Industry Association (OIA), bicycling is the most popular outdoor recreation activity in America; however, African Americans make up only 6% of the cycling population. Of ACA’s 44,000 members, the majority is white and male. In order to truly achieve our mission, ACA felt outreach to more demographics was timely and important.

For the CMH, known for their creative methods of promoting public health initiatives to the minority populations of Pittsburgh, the concept of traveling great distances by bicycle was as intriguing as it was daunting. None of the program directors bicycled more that an occasional recreational ride and none had ever toured. Yet, the idea of combining history with physical recreation held merit. For CMH, the challenge to eliminate ethnic health disparities requires interventions that are scientifically sound and culturally appropriate. Lack of physical activity is a risk factor in several leading causes of preventable disease, and minority populations are especially at risk; blacks are 2-3 times more likely to develop diabetes compared to whites (CDC, 2004). CMH saw the potential to strengthen cross-cultural ties and promote lifelong health through cycling, a form of physical activity available to people of all ages and socioeconomic backgrounds. 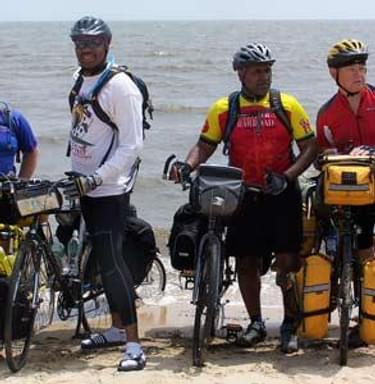 Tour participants along the Ohio River in Ripley, Ohio

When ACA and CMH jointly announced the creation of the route in February 2007, media interest began to build after a story ran on the Associated Press. When the tours were announced, media coverage heightened. Along with a contingent of local papers covering the tours, National Public Radio, Smithsonian, USA Today, Bicycling, Utne Reader, Newsday, Jet, Detroit Free Press, the Washington Post, and the Pittsburgh Post Gazette also featured the UGRR story. The UGRR has received more media attention than any other route in ACA’s thirty-two year history and we credit the partnership for giving the route credibility and a unique platform of appeal.

One of the most beneficial things to come out of this unique partnership is the relationship forged between our organizations. Though we have very different approaches, ACA a national scale non-profit, CMH a localized academic based institution, the project became an opportunity to stretch our thinking and broaden our approaches. We built trust with each other (despite the miles between us) through our bi-weekly, conference call meetings. During these meetings we learned from each other’s expertise. For example, ACA is much more sensitive to the images we use in our print and on-line publications.

We became more cognizant of the barriers that prohibit Americans from bicycling and how to overcome those through our outreach efforts. CMH, in turn, became active cyclists, participating in the 2007 tours, both the self-contained trip which covered all 2,100 miles of the route, and the supported 250-mile adventure into Canada. Making cycling a part of their outreach efforts led CMH to start The Pittsburgh Major Taylor Cycling Club (PMTCC) in 2005 with five members; today, thanks to the enthusiasm of members like CMH program manager Mario Browne, is up to seventy-five. Our organizations have struggled with funding, time, diverging interests and outside influences, but the relationship and the project have blossomed into one of the most successful enterprises in our history. And the best part— our success is a benefit for anyone interested in combining history and bike travel. The UGRR is America’s story— and now the public can enjoy its lessons.