Check out www.2023its.org for the most up-to-date information. 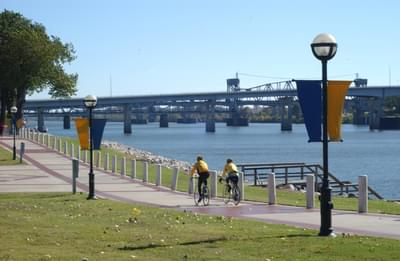 As we are all trying to make the connection between trails and health, you'll want to see Little Rock's Medical Mile project, coordinated by trail innovator Terry Eastin, a linear outdoor health museum. It is "lighting the way" for us to learn how to work with the medical community and bring hospitals and physicians across the country "on board" with trails. Healthcare is a big business in Little Rock, which has helped provide major support for the trails system.

Then there is the Big Dam Bridge project, over the Arkansas River, that is a shining example of how to take a BIG vision and make it happen. Judge Buddy Villines of Pulaski County had the concept and worked tirelessly to make it happen. He says "We build roads because we have to move cars in commerce. We build trails to improve the quality of life for our citizens." The project won a 2007 Exemplary Human Environment Initiatives Award from the Federal Highway Administration. See 2008 BDB events...

May 17, 2008 saw the grand opening of yet another new bicycle/pedestrian crossing of the river. Junction Bridge has served as a backdrop to both Little Rock and North Little Rock’s skylines for over 100 years. The bridge is a great place to view the Arkansas River. Yet another project to convert an abandoned railroad crossing of the river into a trail is the Rock Island Bridge, which will link to the Arkansas River trail right at the Clinton Presidential Library.

The mayors of both Little Rock and North Little Rock live trails. Jim Dailey, Mayor of Little Rock, believes "The artistry of our landscape, the health of our citizens, and the desire for innovative economic stimulus that harmonizes with the environment have given us a mandate for developing the Arkansas River Trail."

Mayor Patrick Hays says, "The North Little Rock River Trail is one of the most scenic bicycle and walking trails in the country." This proud and enthusiastic "father" of the trail actually helped lay out sections of it.