The 85-mile rail trail between Weiser and New Meadows passes through desert canyons, evergreen forests, alpine meadows, and small towns. Highlights of the trail are the historic trestles and abundant wildlife. 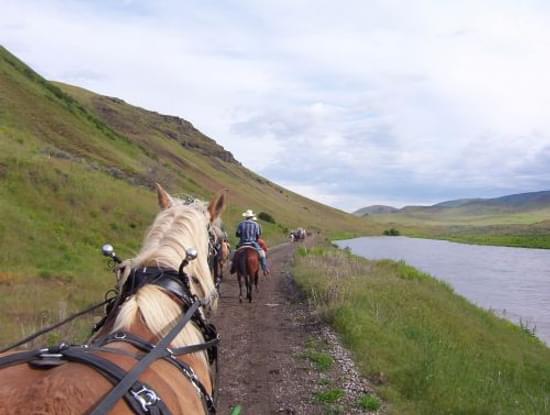 In August 1997, the Union Pacific Railroad executed a deed granting Friends of the Weiser River Trail the entire rail corridor under the 1983 Railbanking Act. It should be noted that this action placed Friends in the three percent category of rail-trails nationwide that are owned and managed by a private non-profit organization.

From that date forward Friends began the development of the trail; installing access control gates, placing planking and installing 8,100 feet of handrails on the 62 trestles, filing in washouts, grading and rolling the trail and placing various signs showing directions and distances. A weed spraying program is ongoing and includes the annual trek of 1,000 goats along the trail to keep noxious weeds under control.

Transportation enhancement grants have funded pavement and trailheads with informational kiosks in the cities of Weiser, Cambridge and Council. Grants provided under the Recreational Trails Program administered by the Idaho Dept. of Parks and Recreation have funded trestle improvements and trail repairs.

Beginning on the south side of the City of Weiser, the trail runs northeast for 85 miles up to the West Pine Trailhead, approximately four miles west of New Meadows. Along the trail you will find every terrain from desert canyons to evergreen forests to alpine meadows. Users will see traditional farmhouses and barns, historical town buildings, a one-room schoolhouse, cabins, trophy homes and subdivisions. 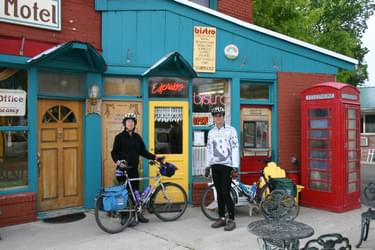 Highlights of the trail are the historic trestles. Some are constructed entirely of wood except for the new steel railings. A few relics of railroad history can still be found along the trail.

The trail offers a full range of beauty, from colorful wild-flowers in the spring to the reds and yellows of fall leaves, from green grass to brown hillsides, from cottonwoods to pines, and a changing river song from the rush of the spring runoff to the gentle flow of a late summer stream. Wildlife abounds.

Deer are commonly seen, as well as chukars, quail, ducks and geese. Occasionally a trail user will come across an eagle, wild turkeys, blue herons, coyotes, bears, wolves, elk and possibly a mountain lion. Wild rainbow trout can be found in the adjacent Weiser River.

There are four small communities along the trail that provide services to trail users. Weiser is the largest city and has many restaurants, motels and stores. Although Midvale is the smallest city trail users will still find a grocery store, café, bed and breakfast, and bar. Cambridge and Council both offer motels, RV parks, grocery stores, restaurants, and more.

In 2006 when the US Forest Service decided to renovate the Evergreen Campground they partnered with the Friends of the Weiser River Trail to include a shared parking area, informational kiosk and signs. The FS also built a short connecting path to the trail and installed a hitching rail for horses.

The trail is open to the public year-round with access provided at over thirty sites along the trail. There are, however, a few rules and trail etiquette policies that the public is asked to follow. For safety purposes no motorized vehicles are allowed on the trail except for emergency and service vehicles. Parking space for vehicles is available at each of the many trailheads. 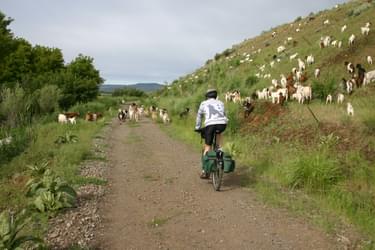 Although the major use of the trail is by individuals there are currently two group activities that are sponsored by Friends. There is an annual spring bike ride offering two short rides and one 45 mile ride.

In addition a four day wagon train event is held annually in May, beginning in Weiser on a Friday and finishing up on the next Monday morning in Council, covering a distance of 60 miles. Although this event is referred to as a “Wagon Train Ride” equestrians are more than welcome to participate as outriders. A half marathon event for runners is being planned for the spring of 2010.

Other local groups have utilized the trail for Bike-A-Thons and health and fitness walks. Numerous boy scouts have earned Eagle Scout badges by completing work projects on the trail. In 2008 and 2009 the Idaho Youth Conservation Corps spent three weeks on the trail pulling weeds, policing the trail corridor and cutting back invading brush.

The trail is offered free of charge to the public. The Friends of the Weiser River Trail encourages trail users and general trail supporters to become members of the all-volunteer Friends organization. In 2009 the membership totaled over 650 members. The annual dues start with a donation of $15 for a “Basic” membership. All funding for maintenance and improvements comes from grants, fundraising campaigns, memberships and renewals, and donations. Volunteers who provide many hours of labor and donate the use of their equipment are a vital part of the success of the trail. Volunteer help is always welcome, but members are not obligated to help out.

Beginning at Weiser, Idaho, the trail runs northeasterly along the Weiser River for 85 miles, to the West Pine Trailhead on Old Hwy. 95 Road about four miles west of New Meadows, Idaho.