Prepared for the Virginia Department of Conservation 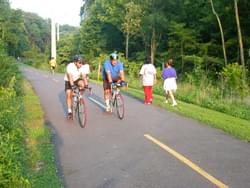 This report is one in a three part series looking at linear recreation corridors, or trails, in Virginia. The intent of the series is to quantify a number of issues related to recreational trail use across different types of trails in the State. These issues broadly include: (1) trail use, (2) user demographics and preferences, (3) economic benefits to users, and (4) economic impacts to the local communities.

This report focuses on the W&OD Trail, a 45-mile long transportation and recreation corridor running from Arlington, VA west to Purcellville, VA. The first part includes statistical information about user demographics, trip profiles, attitudes and management preferences. The next part of the results section explores the economic benefits accruing to trail users and the economic impacts on the region stimulated by trail use.

A representative sampling procedure described above was used to obtain 1,426 completed questionnaires from trail users between May 2003 and April 2004. Information from completed questionnaires was combined with on-site summer visitor counts at various trail segments to arrive at an annual estimate of adult visits (aged 16 and older) of 1,707,353. Of this number 5.24% or 89,807 of the visits, amounting to 33,262 group trips were from users living outside the northern Virginia area. The remainder if the visits, 1,617,546, were from local residents.

Trail users were primarily white (85%) and evenly split along gender lines. Asians were the leading minority group at 6 percent. The largest two age cohorts were those aged 36-45 and 46- 55. Average annual household income for users was just under $100,000. About 84 percent of users reported being employed, 63 percent in the private sector. The average user group size for all visitors was 1.7, but more than 57 percent of visitors were using the trail alone.

Nonlocals traveled from an average distance of just under 200 miles. Nonlocals reported on average 16.5 visits per year. However, removing the 5 percent of nonlocals with very large reported number of visits lowered the average to 6 visits per year. While on the trail, nonlocals spent about 3.4 hours and averaged over 32 miles traveled.

On average, local users not living immediately adjacent to the W&OD traveled 10 miles to reach the portion of the trail they wished to use. Among locals, modes of travel to reach the trail were split primarily between auto (44%) and biking (38%), with walking accounting for 15 percent. The average monthly use by locals was just over 10, which if extrapolated to 12 months, would imply around 120 visits per year. Summer accounted for 40 percent of the share of annual use for locals, with spring and fall at almost 30 percent each and winter use accounting for just over 10 percent.

Most users (85%) claimed that recreation and fitness was the main reason for their use of the trail. Among users, biking (66%), walking (16%), and jogging (16%) were the main observed activities. Among the benefits received by users, health, a safe place to recreate, and nature were the most highly ranked. A place to take pets was the lowest ranked benefit. The most important concerns listed by users were maintenance, safety, and crossings. However, more than 58 percent of those queried did not list any specific concerns suggesting the W&OD is for the most part meeting their expectations and needs.

Trail features were assessed in terms of their importance to users and in terms of their current observed condition. Among trail features, maintenance, natural scenery, and the presence of water fountains were ranked the most important to users. Parking, trail connections to commercial establishments, and restrooms were ranked the least important. Trail users ranked the current conditions for natural scenery, maintenance, and parking highest. The trail features ranked lowest in terms of current condition were restrooms and water fountains. It should be noted that the condition for these lowest ranked features averaged slightly less than "good" and well above "fair."

Visitors were also given 4 statements pertaining to crowding, safety, construction, and rules enforcement with which they could agree or disagree at various intensities. These results indicated that the majority of users feel very positively about the way the trail is currently managed with respect to safety and rules enforcement. Users were about evenly split as to whether crowding or construction projects negatively impacted their use of the trail. Very few users claimed to be neutral about any of the management statements. This indicates that for crowding and construction, there are basically two large groups of users coming down on either side of these issues.

An estimated 1.7 million adult W&OD users spent in total about $12 million annually related to their use recreational use of the trail. Of this amount, about $7 million was spent directly in the northern Virginia economy by locals and nonlocals using the trail. The estimated 1.6 million local visits accounted for about $5.3 million of spending directly related to the use of the W&OD.

Nonlocal visitors spent about $199 per group trip and $74 per person to visit the W&OD. Of this amount, $41.50 per group and $15 per person was spent in the northern Virginia economy directly related to trail use. Overall, the estimated $1.4 million in nonlocal spending generated about $1.8 million in local economic impacts and supported 34 full time job equivalents and about $642 thousand of personal income.

Finally, while access to the trail is "free," there is nevertheless considerable economic value that accrues to W&OD users. This net economic value or consumer surplus is a dollar measure of the amount of welfare that users would lose if the trail were unavailable. Using conventional economic methods, it was determined that, on average, a trip to the W&OD was worth between $9 and $14 dollars per person more than the average cost to use the trail. Extrapolating this net economic benefit across 1.7 million adult visits, of which 93 percent were for the primary purpose of visiting the W&OD, leads to an annual net economic benefit of trail access to users of between $14.4- and $21.6 million. Because the W&OD is primarily a local resource (95% of visits are by locals) rather than a destination trail, the vast majority of these net economic benefits accrue to northern Virginia residents.