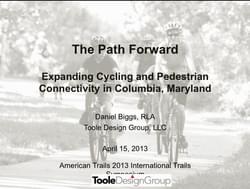 As one of the nation’s most well-known planned communities, Columbia has earned a reputation for being a great place to live, work, and play. Over the course of the ensuing 45 years, Columbia’s pathway network has grown to include 94 miles of paths. For a community of its size, Columbia has one of the most extensive pathway systems in the country. The pathway system was built prior to the era of design standards, navigating the paths is a challenge, and many key connections are lacking as well as links to on-road accommodations for bicycling.

An “Active Transportation Action Agenda” was developed to provide recommendations for creating a more interconnected and comprehensive bicycling and pedestrian circulation system for health, recreation, and transportation purposes. A targeted list of action items that will improve pedestrian and bicycle connections throughout Columbia, with a strong emphasis on the pathways, was developed. These items include increasing connections and reducing missing links; developing principles for pathway design and a wayfinding system; and inspiring and motivating more pedestrians and cyclists which will educate and encourage people of all ages and abilities to use Columbia’s pathways.