The American Tobacco Trail is a 22.6-mile long Rails-to-Trails project located in the Research Triangle region of North Carolina, running along an abandoned railroad bed originally built for the American Tobacco Company in the 1970s. 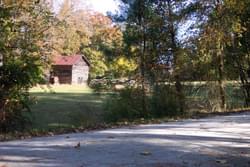 This 14-mile rail-trail will eventually span more than 22 miles in Durham and Wake Counties. The trail provides the fastest growing portion of Durham with a key community connection to area schools, parks, businesses, and places of worship. Trail users enjoy a number of recreational activities including biking, roller blading, and horseback riding. This shared-use greenway is a fine example of what can be achieved through a diverse partnership.

The American Tobacco Trail (ATT) is a regional rail-trail project which will ultimately run from the Durham Bulls Athletic Park in downtown Durham to New Hill in Wake County. Currently, the northern 7.7-mile asphalt paved section, a 3-mile natural surface south of I-40, currently being refurbished and maintained by the Triangle Rails-to-Trails Conservancy and the southernmost 3.5 mile granite screenings surfaced section in Wake County are open to the public. 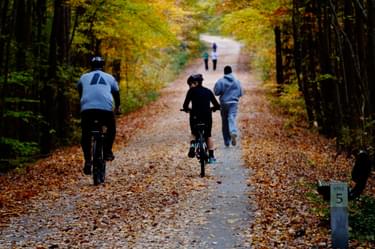 Bikers and walkers having fun on the trail; photo by Sarina Lewis

The northern 7.7 mile section including the 1.2 mile long Riddle Road spur is a 10-foot wide asphalt with 2 foot screenings shoulders open to hikers, cyclists, roller bladers, and wheelchair use. The other sections feature softer, but firm surface that don't permit roller blading, but do welcome equestrian users. The ATT is the first true shared-use greenway of significant length in North Carolina.

The ATT is special because the northern section currently connects homes and neighborhoods with shopping, restaurants, offices and other workplaces, parks, other greenways, places of worship, schools and entertainment. It provides outlying parts of the city with a safe off-road link to downtown.

Within three years, a unique pedestrian bridge over I-40 will connect this section of the trail with the Streets of Southpoint Mall, the largest shopping mall in the Triangle, which opened in late 2002. It will also later connect this with what is currently a rural portion of Chatham County and allow access to "forever wild" and limited access Corps of Engineers land.

The Wake County section currently allows wheelchair users to access these Corps of Engineers lands for the first time. This rural portion also offers a place for quiet contemplation as well as recreational and physical fitness opportunities. 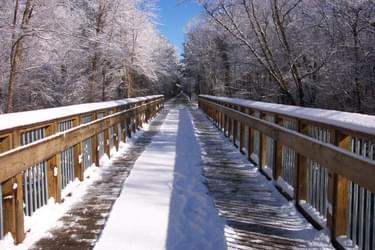 The Durham section of the ATT is a designated segment of the East Coast Greenway, a 2600-mile long, "Urban Appalachian Trail" connecting cities from Maine to Florida.

According to the Durham (NC) Herald Sun, "The ATT is part of an old Norfolk Southern Railway line that was used to bring tobacco from North Carolina and South Carolina into the American Tobacco factory, which once was among the largest suppliers of cigarettes in the world, including the popular Lucky Strike brand."