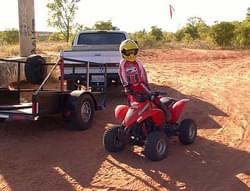 Along with the growing popularity of off-highway vehicle (OHV) recreation in the United States, there has been an inevitable increase in demand for areas which provide for such recreation. This growth has occurred for a number of reasons which include but are not limited to: an ever-increasing population, increases in amounts of free time and expendable income, and advances in OHV technology. Meanwhile, according to a report prepared for the Recreation Roundtable in Washington, D.C. entitled Outdoor Recreation in America 1998, the nationwide level of satisfaction with services and areas provided for this type of recreation is relatively low

In Tennessee, OHV recreation surfaced as a high priority issue during the statewide recreation planning process in 1995. As a result, Governor Sundquist appointed a committee of state, federal, and public representatives to develop recommendations for a statewide OHV recreation plan. The University of Tennessee was commissioned in 1999 to conduct a survey in as a part of this committee's information gathering process. The purpose of this study was to articulate the nature and extent of OHV recreation in Tennessee and its associated economic impacts. Furthermore, the study was to characterize and describe OHV users in Tennessee, their perception of the current situation, and their level of support for aspects of a potential future OHV recreation program.

The results of the survey are presented in this report. They are organized into four sub-sections to facilitate the reader's ability to find pertinent information quickly. The first section seeks to describe the people who participate in OHV recreation in Tennessee. The second section focuses on characteristics of OHV recreation trips. The third section shows the perceptions of or level of satisfaction with the current status of OHV recreation in Tennessee. The fourth section deals with the preferences of OHV users and their level of support for different aspects of a potential future state OHV program. These four sections are followed by a set of appendices which include examples of the mail and telephone surveys, as well as a catalog of comments from survey respondents.

For presentation in this report, survey respondents themselves are divided into four groups according to the types of machines owned and used during OHV recreation. This was done to highlight the subtle differences among OHV user sub-groups. The first group consisted of those who own an allterrain vehicle (ATV) only, and the second group was made up of those who own a four wheel drive truck (4wd) only. The third group included those respondents who own either an off highway motorcycle only or both an off highway motorcycle and any other type of off highway machine. The fourth and final group includes those respondents who own both an ATV and a 4wd.

Information gathering techniques for this project included a combination of on-site, telephone, and mail surveys. These surveys were developed and conducted by the Human Dimensions Research Lab of the Department of Forestry, Wildlife, and Fisheries at the University of Tennessee, Knoxville. Three subpopulations were identified and surveyed, including OHV special event participants, Tennessee sportsmen, and the general population.

Event riders consisted of participants in the Dixie Run, Appalachian Jeep Jamboree, Gateway to the Cumberlands, and VSTA OHV events. These people filled out a short on-site survey and were asked if they could be contacted in the future. Participants in those events who live in Tennessee and who agreed to be contacted were sent a mail survey. Of those 340 participants, 169 completed and returned mail surveys for a response rate of 49.7%.

Tennessee sportsmen interviewed during the Fall 2000 TWRA hunting and fishing survey were asked if they owned or used an OHV for recreational purposes. Those who responded "yes" were then asked if they could be contacted with a follow-up mail survey. A random sample of those sportsmen who agreed to be contacted was selected to receive an OHV mail survey. Of those 587sportsmen, 180 completed and returned mail surveys resulting in a response rate of 31.7%.

For the general population survey, a randomly generated sample of Tennessee telephone numbers was purchased from Survey Sampling, Inc. in Fairfield, Connecticut. Upon contact, the person answering the telephone was asked if anyone in the household had driven or ridden an OHV in the past 12 months. If the response to this question was affirmative, then the person administering the survey asked to speak with the primary OHV user in that household. Using Random Digit Dial (RDD), 721 households were contacted, and 411 interviews were completed by telephone for an RDD Telephone response rate of 57.0%. A follow-up mail survey was then sent to 158 OHV users identified in the RDD Telephone survey. Of those follow-up surveys, 60 were completed and returned for a 38.0% response rate.

A: Characteristics of OHV users in Tennessee

Section B: Types of OHV use and trip characteristics

The University of Tennessee System is comprised of campuses at Knoxville, Chattanooga, and Martin; the Health Science Center at Memphis; the Space Institute at Tullahoma; and the statewide Institute of Agriculture and Institute for Public Service. The UT System has a presence in each of Tennessee’s 95 counties. Through the combined force of education, research and outreach, the University serves students, business and industry, schools, governments, organizations and citizens statewide.