The U.S. Army Corps of Engineers at Enid Lake manages the 22 mile multi-purpose trail. The trail provides visitors with recreational opportunities including camping, hiking, equestrian riding and a chance to visit historical areas of Enid Lake. 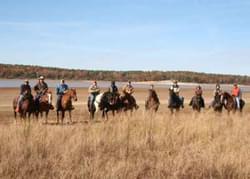 Over the next several months discussion was expanded to include a marked multipurpose trail to be used by equestrian groups, hikers and students from local schools and universities. The trail would cover a maximum of 17 miles and would include a route from Point Pleasant Recreation Area through the old Ford’s Well site and over Spyglass Hill.

Grants were received from the Federal Trails Program through the Mississippi Department of Wildlife Fisheries and Parks, U.S. Army Corps of Engineers “Handshake” agreement, and a partnership was entered with the Point Pleasant Trail Riders to construct Spyglass Hill Trail. The Spyglass Hill Trail is a unique trail. Visitors to the Spyglass Hill Trail can step back into history and taste a sample of therapeutic water from the old Ford’s Well, visit the area that was once known for it’s 4th of July celebrations or view Enid Lake from one of the prominent hills in Yalobusha County.

In 1898, Mr. W. B. Ford dug a well with the intentions of providing water for his livestock. When the well was completed it produced great quantities of reddish-colored water, which could not be tolerated because of the taste. A sample of the water was taken to Water Valley and sent off to be analyzed. After analysis of the water, several trials for different diseases were given it, resulting in wonderful cures and “Ford’s Mineral Water” was born. 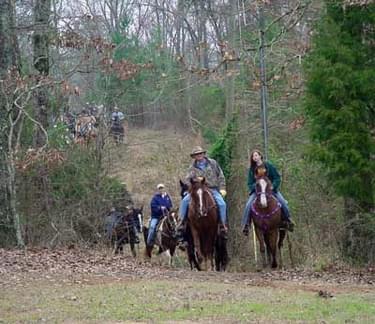 Equestrians on the trail

The water became famous and was bottled and shipped by railroad from nearby towns of Oakland and Water Valley and became quite lucrative for Mr. Ford. The area attracted many visitors who came to the site to bathe in and drink the therapeutic water. Ford’s Well became a very popular place for 4th of July Celebrations and attracted visitors from many communities from the surrounding area who participated in picnics, ballgames, dances and courting. Amenities to the Ford’s Well Area include a 12 campsite wrangler campground with water, electricity, picnic tables, fire rings, grills and a crushed limestone parking pad at each site. The area also has a picnic shelter, a gazebo over Ford’s Well, a comfort station, a dump station, and a wash rack and hitching rails for horses.

Spyglass Hill is a prominent point overlooking Enid Lake. The hill itself is approximately 350’ above sea level and is characterized with a long gradual slope and the peak marked with massive sandstone rocks. During the Ford’s Well era the area was often just referred to as “The Mountain” and later generations called the hill Rocky Point. Amenities to Spyglass Hill include three primitive campsites with a picnic table, fire ring and grill. Also located atop Spyglass Hill is hitching rails for horses.

Spyglass Hill Trail offers many recreational opportunities including camping, wildlife watching, equestrian riding, and scenic views. The diverse terrain offers visitors a chance to become physically fit and relax their minds from the everyday hustle and bustle while viewing the many plant and wildlife species that inhabit the area.

For visitor safety, trail markers including directional arrows, mile markers and signs have been placed along the trial. The Spyglass Hill Trail has sparked great interest since its inception. The University of Mississippi and Northwest Mississippi Community College Recreation Department instructors have expressed interest in using this trail as part of their course requirements, and members of the surrounding communities have also expressed interest in adding additional campsites, interpretive/educational stops, and there has been talk of seeking to have Ford’s Well added to the National Register of Historic Places.