This one-mile long loop trail meanders along the river and includes benches, observation decks, and an informational kiosk. Visitors can observe the resident and migratory wildlife and breathtaking Oklahoma landscape at the Refuge. 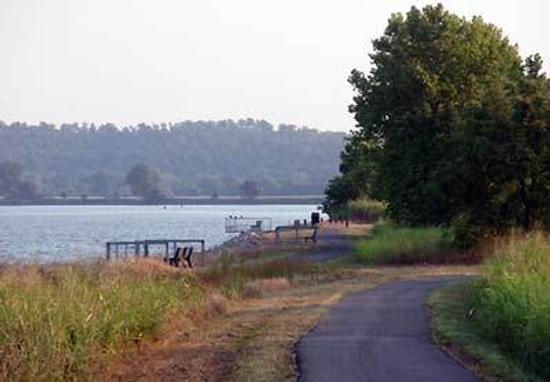 Sandtown Nature Trail, located 3 miles south of Vian, Oklahoma, is part of 20,800 acres that comprise the Sequoyah National Wildlife Refuge. The refuge is nestled in the gently rolling foothills of the Ozark Mountains and serves as a major stopover for waterfowl during their spring and fall migrations. It is an overlay project with the US Army Corps of Engineers and was established as part of mitigation for lands that were lost through the creation of the Robert S. Kerr Reservoir in 1970.

Sandtown Nature Trail was first established in 2005 as a 2 ½ mile primitive nature trail that traversed through various habitats of the historic Sandtown Woods area. Even though the trail was maintained and mowed regularly, the trail received little use during the spring and summer months due to high numbers of chiggers and ticks and a noticeable amount of poison ivy.

In 2008, the trail was reconfigured as a one mile paved loop to make it accessible and more inviting to refuge visitors of all physical abilities. Since paving the trail, the number of visitors using it has increased dramatically. On May 20th, 2011, Secretary of the Interior, Ken Salazar, officially recognized Sandtown Nature Trail as a National Recreation Trail (NRT).

Today, this trail is a one mile loop that is fun and easy for all users as they stroll down the pleasant pathway to commune with nature while exploring the habitat and observing the wildlife of Sequoyah NWR. The refuge is a sanctuary for bobcats, deer, and raccoons. They are very shy animals, and it is rare to get a glimpse of them.

Luckily, many animals are not as difficult to see and the nature trail is alive with wildlife species such as squirrel, rabbit, fox, armadillos, as well as many bird species for great birding opportunities. Large numbers of mallards, snow geese, and other waterfowl utilize the refuge during their migration periods. Mallards enjoy the many wetlands throughout the refuge, including the wetland near Sandtown Nature Trail. Snow geese number between 10 and 15 thousand and the nature trail is a spectacular area to view them and other waterfowl as they move throughout the refuge and the Arkansas River.

Local schools visit Sandtown Nature Trail as a part of field trips or special events. Students have learned about the refuge and its wildlife while conducting activities such as wildlife scavenger hunts, wildlife identification classes, wintering bald eagle counts, and the Big Sit which is a birding event sponsored by the National Audubon Society. 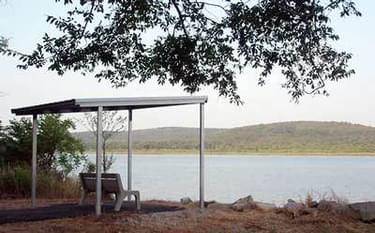 Observation deck along the trail

The trail begins its journey along the banks of the Arkansas River giving a view of the Canadian River delta at the confluence of the Arkansas River. It’s in this area of the trail where the rich history of the land is at its strongest. In the late 1830’s, this area is believed to have served as a water route for what is known today as the “Trail of Tears.” There are a number of observation/fishing platforms along this segment of the trail that provide excellent areas to cast a fishing line or view your favorite bird. Hikers often use these areas to rest as they enjoy being surrounded by nature.

As the trail makes its first turn inland, hikers find themselves entering a hardwood bottom habitat that provides a huge dark canopy over the understory below. Another seating area is provided on this portion of the trail where some of the more shy refuge inhabitants like to hide. The patient observer that quietly waits along the trail edge is often rewarded with a rare glimpse of some of the refuge inhabitants when they think no one is around.

Before the trail ends it meanders into an open area where tall native grasses grow and a small wetland is located. This wetland is a popular spot for the waterfowl that visit the refuge. Often times, mallards and gadwalls are seen dabbling in this area as they utilize the refuge as a place to rest and feed during their long journey.

Whether guests are taking in the sights and scenes of the landscape, photographing the wildlife or foliage, or exercising after a hard day at work, Sandtown Nature Trail is a wonderful place that offers a glimpse at the variety of flora and fauna of eastern Oklahoma and connects with the rich history of the past. This trail offers a great way to spend time with friends and family.

To reach the refuge, take Vian exit (exit 297) off I-40, drive three miles south on N4520 rd. Follow signs to the Refuge Headquarters.