From San Jose Department of Parks, Recreation, and Neighborhood Services

San Jose has conducted its 5th annual Trail Count for 2011. The count and survey of trail users was initiated in 2007 to show the Administration that special event closures in the downtown area had a big impact on usage and enjoyment of the City’s trails.

Since that first count, San Jose has initiated a trail closure policy that preserves access to the greatest extent possible and has increased awareness about the value of trails for both recreation and commuting. The regularly counting process also documents that trail usage has increased year after year – which helps to reinforce that trail development is a good investment.

This year’s count documents a 5.7% in increase in trail use along the Guadalupe River Trail at a station that has been in use since the first year. Trail Count has also made San Jose more competitive for grant funding, helped improve the planning of future trails, and has supported inclusion of trails in the City’s General Plan update as a transportation element.

The survey reveals that over 50% of trail users are commuting to and from Silicon Valley industry. Most responders say that longer trails and gap closures could attract more visitors to the trails.

Primary data collection objectives of the count and survey were to: 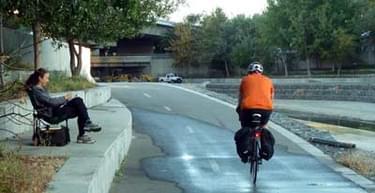 San Jose's Trail Network is the foundation for its Green Vision