From West Thompson Lake project of the U.S. Army Corps of Engineers

This five-mile water trail within the U.S. Army Corps of Engineers’ West Thompson Lake project is an excellent 3-hour outing for paddlers who are comfortable with moving water and enjoy seeing varied landscapes of forests and fields along with extensive wildlife habitat. 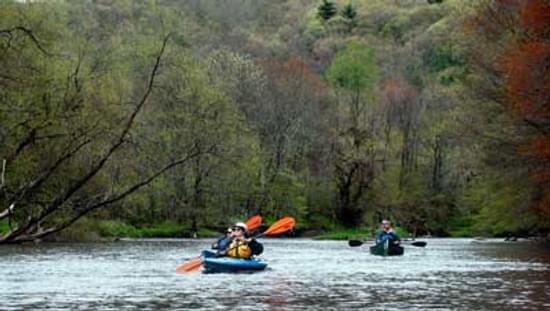 Springtime Paddle on the Quinebaug; Photo by A. Dabrowski

Springtime Paddle on the Quinebaug; Photo by A. Dabrowski

The banks range from steep and forested to flat, agricultural fields. Especially during the first three miles, you will feel isolated, except for two bridge crossings. The U.S. Army Corps of Engineers and the Thompson Trails Committee work collectively to maintain the entire length of the water trail and maintain the put-in at Fabyan Dam and the take-out at the West Thompson Lake Boat Ramp.

Before you put in at Fabyan, notice the dam just upstream of the bridge. It was built in 1804 to power a carding and felting machine at the mill on site. Between 1821 and 1870, steel axes and tools and woolen goods were produced here. The Fabyan Mill was severely damaged by the 1938 hurricane and never recovered. In March 1939, a fire destroyed the mill completely.

As you are paddling down the idyllic river, let your imagination take you back to an earlier time in history. Thompson was home to Nipmuc Native Americans from the earliest documented history. The word “Nipmuc” means fresh water people. Thompson had an above average share of “fresh water” Native American presence because of its rivers (especially the Quinebaug) for fishing, lush river valleys, hilltops suitable for planting, and excellent woods for hunting. 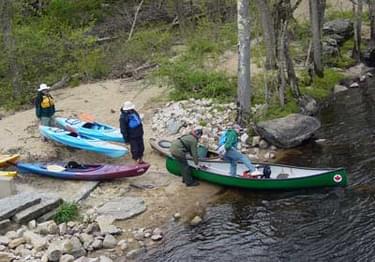 As you paddle past the present day cornfields, picture how the Native Americans may have planted those flat river valley plains entirely by hand. The Native Americans would plant corn fields by burying two or three corn kernels together covered by a small fish and then mounded the soil on top in a unique way. When you catch a glimpse of a fish darting under your canoe, picture the river in earlier days with weirs constructed of stone to channel the fish for easy capture with baskets or spears. This quiet, slow-moving river abounds with unique history and culture.

When the river opens up to the 200 acre West Thompson Lake, a modern day legend emerges. The Ramsdell Farm was located on the west side of West Thompson Lake. The house was occupied by the Ramsdell family since its purchase in 1825 by Hezekiah Ramsdell, the itinerant Methodist minister. After the devastating floods of 1955 the U.S. Government planned flood control projects to prevent future disasters.

The entire town of West Thompson was needed in order to construct a dam and flood plain on the Quinebaug River. Land was acquired by the U.S. Army Corps of Engineers through eminent domain. Only one resident fought to save her family's land, Alice Ramsdell, who greeted the corps with a shotgun. Refusing to leave, an agreement was finally met whereby Alice remained on the property paying a small land lease every month until her death in 1995. The buildings were removed but the foundation of the Ramsdell house still remains on the west side of the lake, directly off of Old Ravenelle Road.

Whether you are unloading your kayak at Fabyan Dam, paddling in a cove full of spawning carp, or gliding over the glass-like lake surface, wildlife and beautiful scenery are plentiful. Watch for turtles, Great Blue Herons, Green Herons, Canada Geese, various ducks, red fox, hawks, osprey, turkeys, and many songbirds. Bald eagles may be spotted in the late winter and early spring. The Quinebaug River is stocked with brook, brown, and rainbow trout. There is also a healthy population of small mouth bass throughout the river. In addition, there is a 7.5 mile Quinebaug River Hiking Trail that starts at the Fabyan Dam and runs south to West Thompson Lake. 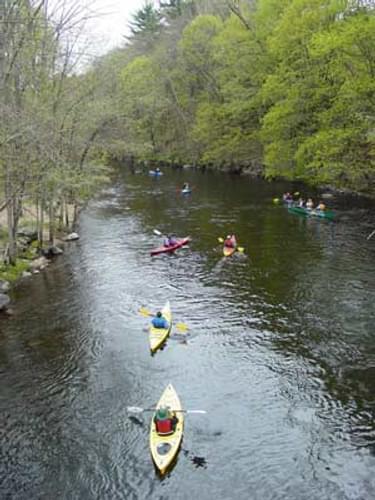 Canoes and kayaks on the river

West Thompson Lake is a part a series of flood damage reduction dams in the Thames River Basin. Water levels can fluctuate tremendously and rapidly. The greatest variation in water level occurs in the spring and fall following heavy rain events. Paddling is not suggested during these high water events. Paddling this stretch of the Quinebaug River is ideal when the inflow coming into West Thompson Dam is 250 CFS (Cubic Feet per Second). If you have questions on the paddling conditions of the river, contact the Park Office at 860-923-2982 to make sure it is safe to paddle.

Exit 99 off I-395. Turn right at CT-200. Continue onto Buckley Hill Road. Continue on CT-12. Take a slight left at CT-131. Turn left at Fabyan Woodstock Road. You will see the Fabyan Dam Canoe Launch on your left about a half mile down, just before the bridge over the Quinebaug River.