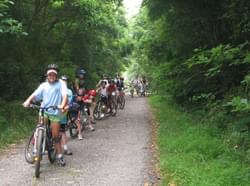 Youth enjoying a bike ride on the trail; photo by Avery Dunn

Youth enjoying a bike ride on the trail; photo by Avery Dunn

The Pomeroy and Newark Rail Trail is a year round accessible paved pathway that runs north-south in Newark, Delaware and in White Clay Creek State Park on an independent right-of-way of an abandoned railroad. It connects to the James F. Hall Trail (also a a designated National Recreation Trail), which runs east-west in Newark along the Amtrak Rail corridor, and also connects to the network of trails in White Clay Creek State Park.

The Pomeroy and Newark Rail Trail opened on September 10, 2012 after 10 years in the making. The trail follows the route of the former Pennsylvania Railroad Pomeroy Branch, which was built in 1869 as the Newark & Pomeroy Railroad, and abandoned in 1939. It is a fully paved, accessible, and lighted pathway that is open year round. The trail includes three information kiosks to inform the public of the rail line’s history. The trail runs north-south starting in White Clay Creek State Park at Hopkins Road and ends when it connects to the James F. Hall Trail, which runs east-west in Newark. The Pomeroy Trail is an urban trail that eventually blends into the natural setting of White Clay Creek State Park.

The Pomeroy and Newark Rail Trail is a means to encourage physical fitness, increase trail-related recreation, relieve traffic congestion and possibly even draw some large-scale public events to the area. The trail is a way to improve pedestrian safety and mobility in Newark and the surrounding area and to promote cycling and non-motorized transportation. The trail connects to the Newark Transit Center at Main Street where the public can travel by bus to surrounding cities and towns. 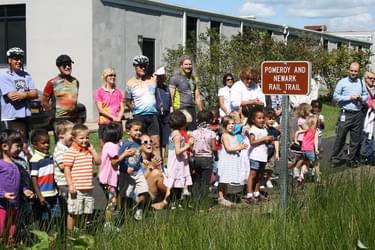 The trail also runs adjacent to the University of Delaware Laird Campus which gives students easy access to the trail and park system. It can serve a million people who live within 20 miles of the trail, from the families who want to take a trip to the park, to the students who want to get to class on time. The trail provides a great opportunity for community members to get out of their cars and to put on their walking or running shoes.

The Pomeroy and Newark Rail Trail is crucial in providing a connection between city parks, Newark's central business district, the University of Delaware, and White Clay Creek State Park. The long term plan is to eventually use the trail to connect local parks, including the former Curtis Paper Mill Park, currently being designed for development, the Newark Reservoir and William M. Redd, Jr. Park. The trail is the back bone of a 75 mile network of trials located in greater Newark.

The Pomeroy and Newark Rail Trail cost $4.7 million, 80 percent of which was funded through the Transportation Enhancement Program supported by Senator Tom Carper. DelDOT funded the purchase of the trail right of ways in 2006 for $2.6 million, and the value of those lands was used as the 20 percent required local match. Trail work and a major bridge were funded with Recreational Trails Program funds through Delaware State Parks with a grant of $185,000 and $250,000 in matching funds. 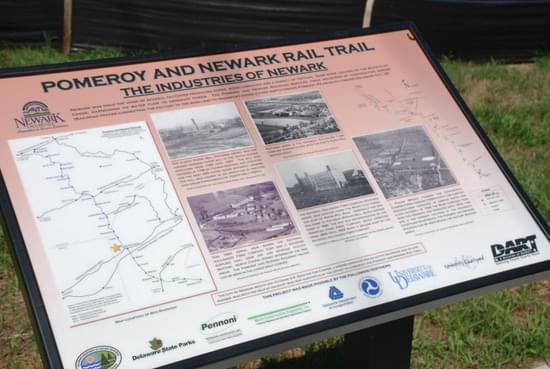 Directions to the trail

To access the northern end of the trail, from Newark take DE 896 to Hopkins Road. Parking is at White Clay Creek State Park Nature Center and the trailhead is off of Hopkins Road. Access to the southern end is from the James F. Hall Trail in Newark, with a trailhead off of Library Ave. There are also various access points along the trail within the city of Newark including Main Street and the downtown business district.