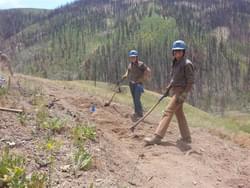 This project is located in the Pioneer Mountains, east of Ketchum, Idaho on the Sawtooth National Forest. The project restored lost access to the High Ridge Trail by rebuilding two miles of trail. It protected a high mountain meadow on the Pioneer-Cabin Trail by constructing a 200-foot turnpike and realigned a steep portion of the Federal Gulch-Timber Draw Trail. The project also corrected drainage problems on a total of 30 miles of trails.

An additional day of volunteer labor was provided by 78 members of the Boy Scouts of America under the direction of Scout Master Kelly Dame and additional volunteer coordination was provided by Chris Leman, Wood River Trails Coordinator (Blaine County Recreation District).

Each year the Pioneer-Cabin Trail sees thousands of hikers as well as many horsemen and many hard core mountain bikers who are on their way to visit the most photographed high mountain cabin in the Sun Valley Area, located at the top of the trail across a high mountain meadow. 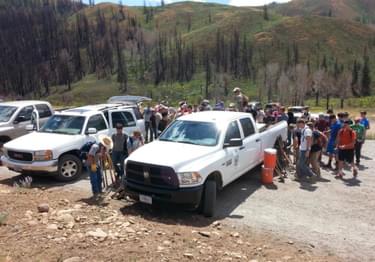 The consequence of the thousands of trail users has been disastrous to the mountain meadow which had become a series of three 8-inch deep trenches stretching for nearly 1/4 mile. In addition (due to lack of maintenance) other features along the trail were either decayed or had ceased to function.

A 12-person Northwest Youth Corp spent three weeks camping out at 8,400 feet elevation and worked moving boulders and buckets of gravel and dirt to construct a 200-foot long raised walkway across the meadow. They also constructed 1,500 feet of new trail that curved above a wet bog and the youth crew rehabilitated the old trail that cut through the wetland.

This crew spent two weeks learning to use steel rock bars and teamwork to move boulders weighing up to 300 pounds. They learned to swing hand tools for eight hours a day while still keeping morale high.

On the High Ridge Trail, a two mile portion stretching across a bare scarp face had become four to six inches wide and dangerously outsloped. Trail users still hiked to “lookout point” at the four mile mark but usually turned back as the trail narrows down to six inches. 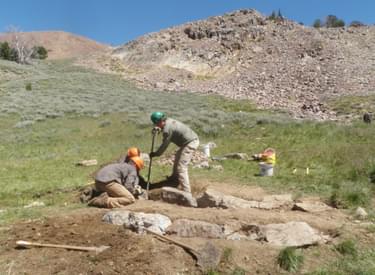 This trail was constructed in the 1930’s by the CCC and is a testimony to the hard work ethic and extreme fortitude that characterized that era. It is a thrilling experience to hike this trail with the Pioneer Mountain Range appearing to be within touch, to the east and looking into Rock and Roll Canyon that drops two thousand feet below.

Restoring the tread back to a 24-inch width was an arduous undertaking for a youth crew, however the crew felt inspired by the history of the trail, the incredible views and terrain and the knowledge that it was up to them to reconstruct this “unique to Idaho” trail.

The NYC crew spent two weeks camped out at 7,900 feet elevation, hiking up to four miles a day (from camp to the work site) to complete this work. Most inspiring experiences the crew described were either “the Forest Service mules packing in watermelon” or the “midnight lighting storm.”

On the Federal Gulch–Timber Draw Trail the chance for the only great hiking-equestrian loop trail on the KRD was in jeopardy. This middle section was notorious for slipping and falling accidents that stopped many hikers and horseman from attempting the loop or prevented them from doing it a second time. An NYC crew worked for two weeks to pound out an amazing 3,200 ft reroute in 2 short weeks and constructed three step down stream fords with an additional turnpike to eliminate the bogs that plagued the stream crossings. This crew also joined up with 78 Boy Scouts to reconstruct a section of the Imperial Trail. The NYC crew’s leadership skills had a chance to shine as they served as instructors and coaches for the scouts for one very long day that resulted in 1,700 feet of new motorized trail. 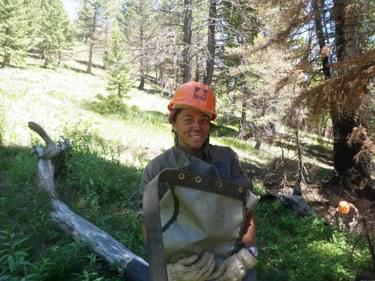 Foremost, these projects restored the opportunity to hike 30 miles of trails up to the highest elevation trail destinations on the KRD without encountering unsafe and unsightly trail conditions.

Hiking the Pioneer-Cabin and High Ridge Trails are the closest experience to actual mountain climbing that many recreationist will have. These trail projects allow hikers to be within the circe basins of the Pioneer Mountain Range without needing ropes or climbing hardware. The experience of hiking these trails is sufficiently intense to be credited as the starting point by many Idaho alpinists.

These trails also provide the opportunity for aging hikers to access the high country without undue risks. Likewise the Federal Gulch–Timber Draw Loop Trail is now the best (and only) hiker-horse loop trail on the District.

It would have been an enormous cultural loss and an enormous experiential loss to allow these trails to disappear or continue to degrade just due to lack of maintenance. However, perhaps the greatest benefit to restoring these trails lies with the deep connection to public lands that over 100 youths now have after living and working in the Pioneer Mountain Range.

To sustain the health, diversity, and productivity of the Nation’s forests and grasslands to meet the needs of present and future generations.