The 22-mile mountain bike trail is a national-recognized route thanks to a partnership among state, local governments, and bicyclists.

by Rob Grant, Alabama Department of Economic and Community Affairs 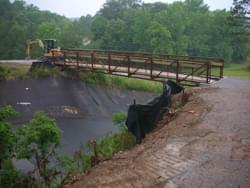 When the Birmingham Urban Mountain Pedalers began contemplating their Oak Mountain State Park trail expansion project some years ago, it was clear from the get-go that crossing the Double Oak Lake dam spillway would be a major hurdle.

Now that hurdle has been cleared at last. Through the assistance of state and local authorities who shared BUMP's commitment to park improvement, a new steel truss, wooden-decked bridge now spans the spillway. With rapid progress on the retaining walls and fill for the bridge approaches, the new bridge officially opened in time to be admired by the crowds at the recent Bump & Grind mountain bike race.

Completion of the spillway bridge will allow riders and hikers to circumnavigate the lake via the crest of the dam, greatly improving access to the far shore.

BUMP began raising funds for the project, but they knew it would not be possible to complete it without motivated partners. In the spring of 2008, BUMP members held a meeting at Oak Mountain State Park with representatives from Alabama State Parks, the City of Pelham, the Shelby County Commission, and the Alabama Department of Economic and Community Affairs (ADECA), to share their dream of a bridge over a dam spillway on Oak Mountain State Park’s largest lake. After that “first date,” it took a little more time to keep all of the parties focused, but soon a Memorandum of Understanding was drafted between BUMP, Oak Mountain State Park, the City of Pelham, and Shelby County (ADECA remained as an interested party, but since they would eventually receive a grant application for this project using Recreational Trail Program funds, it was decided it would be best not to be part of the MOU).

Each “partner” contributed valuable resources. BUMP provided volunteer labor, even going so far to pay for members to be trained to use the Park’s Sweco trail dozer and using it to construct portions of the trail leading up to the bridge.

Thanks to this partnership consisting of a non-profit trail user group, and local, county, and state agencies, the weekend following the opening of the bridge and the one after that packed a one-two punch of off-road racing at Oak Mountain State Park, showing again what a valuable venue the park has become for competitive events.

The action started with a new mountain bike race, the Turn N Burn 360, which was a high noon short-course six-lap shootout for 60 riders. The Sweet Sixteen edition of the Bump & Grind, with racing from 8 a.m. to 1 p.m. (when the free kids' races began). The new single track section brought the full loop up over 20 miles for Sport and Single Speed riders, while the Beginner course was 8.5 miles. Pro and Expert racers did both, for nearly 29 miles total.

June 12-13, the XTERRA race series returned to Oak Mountain with trail runs and off-road triathlons (lake swim, mountain bike, trail run) in a range of distances for solo and relay teams, from beginners to pros. Racing started at 7 a.m. on Saturday and 8 a.m. on Sunday, with the headlining XTERRA Southeast Championship starting at 8:30 a.m. This tough race tested athletes with a 1.5K swim and 30K ride, then finished with a hilly 10K run.

When you have a successful partnership, the work never stops! BUMP has set its sights on more trail development and Shelby County has submitted an application to ADECA for more RTP funds. At approximately 22 miles long (and growing), the mountain bike trail is a mix of mostly tight singletrack and “ doubletrack” trail with about 1600 feet of combined climbing if you ride the entire loop. In 2010 the International Mountain Bike Association designated the Oak Mountain trail as an "Epic Ride."

ADECA is responsible for administering a broad range of state and federal programs that contribute to the department’s mission — Building Better Alabama Communities. Each year we distribute hundreds of millions of dollars to Alabama cities, counties, non-profit organizations and others. Our grants support economic development projects, infrastructure improvements, job training, energy conservation, law enforcement, traffic safety, recreation development and assistance to low-income families. We also work to monitor and protect Alabama’s water resources, and we distribute state and federal surplus property to local governments and other qualified organizations. ADECA programs are as diverse as the people of Alabama and impact every corner of the state. The department works to assist children, the elderly, victims of crime and abuse, the disadvantaged and poor and the unemployed. Businesses, local governments, schools and non-profit organizations benefit from the hundreds of grants and contracts administered by ADECA.​