This rail-trail along Oak Creek links communities on the Nebraska plains and provides a picturesque setting for activities including hiking, mountain biking, and horseback riding. 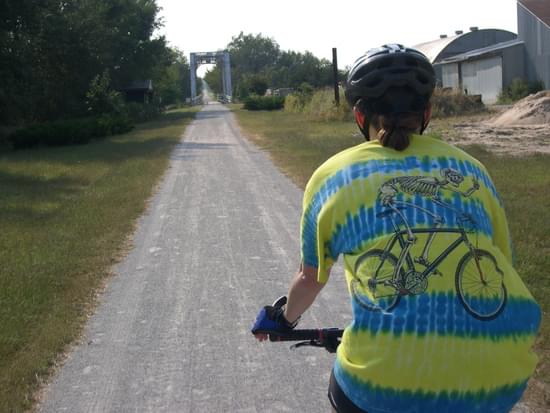 The corridor was once occupied by the Union Pacific Railroad but was taken out of service, using the Federal Rail Bank process in 1993. The Lower Platte South Natural Resources District currently manages this trail.

The trail passes through two small towns, Valparaiso and Loma, Nebraska (filming site for “To Wong Fu, Thanks for Everything!" - Julie Newmar). The trail ends one mile south of Brainard. There are plans for its extension into Brainard.

Oak Creek Trail provides a picturesque experience along Oak Creek including native prairie, oak woodlands, and breathtaking views of Oak Creek as it meanders through the rolling hills. It is one of Nebraska’s most versatile and popular recreational trails. The 13-mile corridor includes a limestone surface for bicyclers and hikers and a natural surface trail for horseback riders. A bluebird trail parallels much of the main trail.

The trail serves surrounding communities, including Omaha and Lincoln. The trail serves as an example of how rural communities can take advantage of a trail providing trailheads, restaurants, and gas stations for trail users’ enjoyment and convenience. 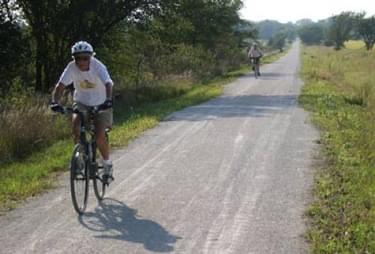 The land was acquired through local efforts of trail supporters, construction of the limestone and bridges were financed by Federal grants, and the natural trail by completed by volunteers. The Lower Platte South Natural Resources District now holds title to the corridor and is responsible for on-going maintenance and improvements.

The American Discovery Trail (ADT) also uses as its route through Nebraska the Oak Creek Trail between Valparaiso and Brainard.

The Oak Creek Trail is one of three rural railtrails featured in a study of to determine the impact of rural rail to trail conversions on small town residents, small town businesses and property owners. The author, Donald L. Greer, Ph.D., was with the University of Nebraska at Omaha (October, 2001.) A discussion of issues and findings from the Nebraska Rural Trails: Three Studies of Trail Impact can be found in the related document.

is responsible for maintaining and developing approximately 50 miles of recreational trails along three former railroad corridors; the MoPac East Trail, the Oak Creek Trail, and the Homestead Trail. Voluntary trail passes are available at several sites along all three. The NRD needs your help to keep the trails at their best. Funds from voluntary trail passes are used exclusively for maintaining existing trails and leaves the NRD more funds to spend on major trail improvements and extensions.