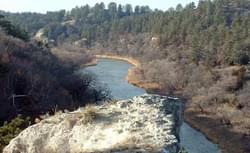 Looking across the river at Fort Niobrara National Wildlife Refuge

Looking across the river at Fort Niobrara National Wildlife Refuge

The Niobrara River, which was called Running Water by Indians and early settlers, extends across northern Nebraska from its narrow beginning in eastern Wyoming. At Valentine, near its midway point, the Niobrara River has cut a valley nearly 300 feet deep and a half mile wide. It empties into the Missouri River some 300 miles east between the village of Niobrara and Niobrara State Park. Its springs and waterfalls make this river one of the nation’s best canoeing waters.

The Niobrara River is a relatively safe river to float and can be navigated by most novices. The Niobrara has steep sandstone canyons, areas of rock beds forming fast water, a few riffles and rapids, along with sandy calm stretches, islands and sandbars. Springs and waterfalls abound. The average depth is about two feet and the water is fast-flowing at 6 to 8 miles an hour, making this river challenging. Numerous springs contribute to its relatively clear, cold quality.

A 76-mile stretch of the Niobrara River, including the River through the Ft. Niobrara National Wildlife Refuge (NWR), was designated Scenic by Public Law 102-50 in 1991. The 5.6 miles of the Refuge portion of the River is considered the most “scenic” and offers visitors a unique experience not available elsewhere. 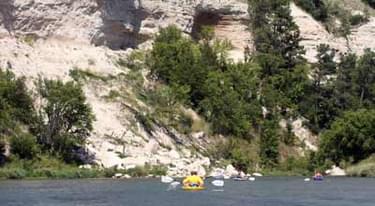 Paddlers on the Niobrara River

The section of the Niobrara River the U.S. Fish and Wildlife Service is nominating as a National Recreation Trail begins at the Fort Niobrara NWR canoe launch at Wild and Scenic River mile 4.8, and continues 5.6 river miles to the refuge’s eastern boundary at river mile 10.4.

The canoe launch is located adjacent to Cornel Bridge, on the upstream side. An ADA compliant launch is reserved for special needs, on the downstream side of the bridge. Allow 2-4 hours for a float trip through the Refuge. There is a $1 per person launch fee. Private outfitters in the area rent watercraft and provide shuttle services.

The Ft. Niobrara Wilderness Area was established in 1976. The 5.6 mile portion of river with recreational floating on Fort Niobrara NWR lies within this wilderness area. Once the river floater leaves the launch area (located outside of wilderness), the only signs of man are fences, a bridge, and two signs. This section of the river has an average gradient of 6.6 feet/mile.

The Refuge section of the river is an interesting and diverse place. The river cuts a deep canyon into the limestone rocks that underlie the Sandhills. Waterfalls occur where seeps and springs flow over layers of hard rock. Six major plant communities converge along the river and are situated according to their habitat needs and tolerances.

Plants from the eastern boreal forest, and tall grass prairie plant communities, inhabit water-rich areas such as the river floodplain and canyon walls. The diverse habitats draw a wide array of birds. The river canyon acts as a migration corridor for many bird species as well as a permanent home for several local species. Along the river you might see mammal species such as deer and elk. Spiny softshell turtles are often seen sunning on sandbars in the river.

Along the Refuge portion of the river alcoholic beverages, firearms, fireworks, high volume radios, devices capable of shooting or directing a projectile or liquid at another person or wildlife, and collecting plants, animals, rocks or historical artifacts are prohibited.