The City of Folsom, California pays tribute to Johnny Cash with a trail of art 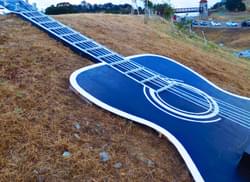 The Johnny Cash Trail begins in Folsom’s Historic District. The trail meanders through gently rolling hillsides of dedicated open space featuring wooded areas of native oaks and wildlife habitat. In spring time, the hills are dotted with wildflowers. The wind whistles through the oaks in late afternoon as birds hidden deep in the canyon hold a conversation.

As visitors approach the end of the Johnny Cash Trail at its intersecting point with other trails, they pass by creeks and streams, and experience unprecedented scenic views of Lake Natoma, the American River, Folsom Lake and access to the extensive American River Parkway Trail. Cyclists who connect to the American River trail can ride to the confluence of the Sacramento and American Rivers in downtown Sacramento.

The second phase of the Johnny Cash Trail, officially opened in October 2017, is the final piece needed to complete a seamless network of 60 miles of scenic trails. The City of Folsom celebrated the grand opening of Phase I in October 2014. Both trails offer short, easy hikes. Phase I is 1.5 miles long and Phase II extends for 1.25-miles. This multi-use trail for both cyclists and pedestrians crosses a 190-foot wooden bridge spanning a deep section of the American River Canyon called Robber’s Ravine. The scent of fresh varnish still fills the air, almost a year after the bridge opened, The ravine gets it name from the notion that robbers at some point in Folsom’s history used to hide from lawmen in the deep canyons.

“In order to complete our trail network, we needed to pass by Folsom Prison. Getting the easement to allow a bicycle trail to run along a prison was a lengthy process and our biggest challenge,” explained Jim Konopka, Senior Park Planner for trails in the Folsom Parks and Recreation Department. “We also needed to keep the trail far enough away from the facility so the prison officials felt comfortable with cyclists and pedestrian traffic passing by. At the same time, we were navigating around hillsides, so we wanted to be sure the trail alignment was not too steep from an engineering standpoint.” About half the trail runs alongside prison property.

Visitors on the newer segment of the trail enter an underpass beneath the main prison road to avoid disrupting deliveries and other vehicle traffic. Farther along the trail, is the Johnny Cash Bridge: a highway overpass inspired by the architecture of Folsom Prison, using its turreted towers as bookends.

The Johnny Cash Trail also accomplished another important goal for the city of Folsom - honoring the legendary singer, his music and his connection to the city. A passionate advocate for prison reform, his signature song, “Folsom Prison Blues,” created worldwide name recognition for Folsom. His January 1968 concert at Folsom Prison transformed both Cash’s life and that of his captive audience. As this final piece of trail to complete the trail network was being discussed, a small group of city staff was considering the connection between Johnny Cash and the trail crossing near Folsom Prison. After significant deliberation and public input the city decided to ask the Cash family if they could name the trail in his honor. To complement the trail, the city wanted to create a world-class public art installation of seven sculptures to correspond with Cash’s music, and its relationship to Folsom, installed at various locations along the trail. The Cash family was thrilled with the idea of naming the trail in honor of Johnny Cash and the public art concept. 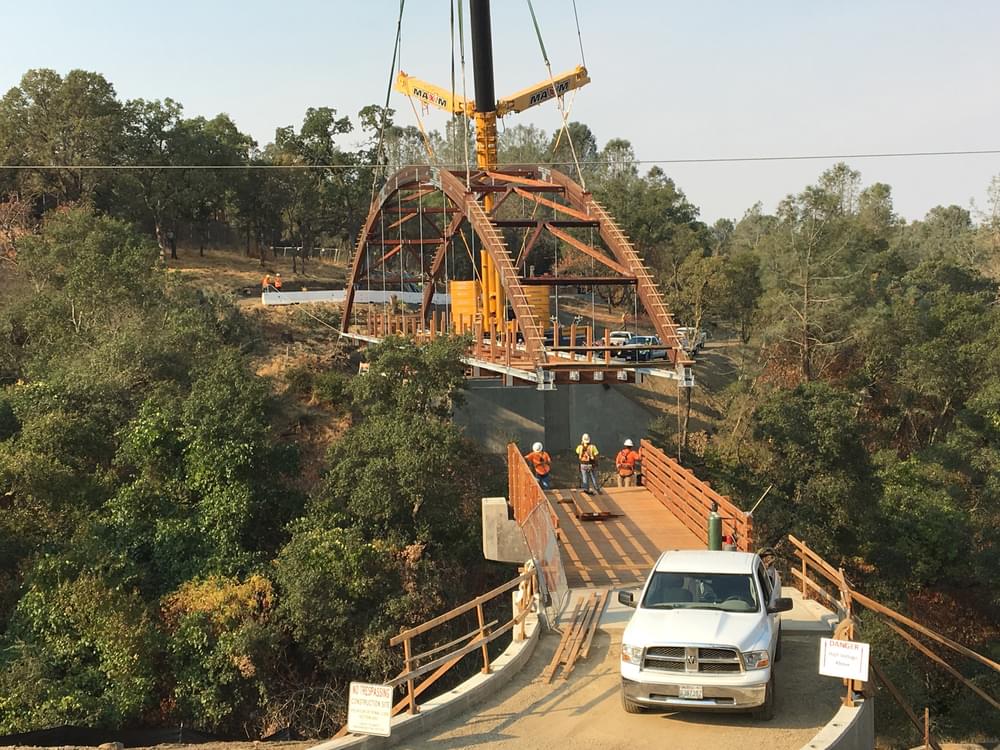 The choice of sculptures was vetted in collaboration with the Cash family and a 12-member art selection panel composed of a diverse group of people connected with the city, the trail and the prison. Roseanne Cash, his eldest daughter, came to the 2014 grand opening dedication and shared her gratitude with participants.

An $8 million fund development campaign is currently underway for the design, development and installation of all eight pieces, so there are no sculptures on the trail yet. Each of the visitors will see posted signs describing the project vision. Sculptures will be installed at smaller parks and rest areas along the trail. A three-acre Legacy Park will be located in the Historic District and feature a 40-foot sculpture of Johnny Cash, in addition to interpretive and educational elements and a small amphitheater.

“These sculptures will begin to tell the story of what Folsom means to him and what he means to Folsom,” described Tom Hellmann, CPRP, Community and Cultural Services Manager for the Folsom Parks and Recreation Department. Romo Studios, LLC, a Sacramento-based art studio was selected to create the sculptures.

Contingent on funding, the first pieces of art installed will be two seven-feet tall guitar picks to serve as trail bookends. One will be placed in Folsom’s Historic District where the trail begins. The second one will be at Folsom Lake. The Folsom Parks and Recreation Commission and Arts and Culture Commission will seek public input to guide their decisions on the order of installation for the next pieces. “To determine what art pieces we install next, we will be engaging the public’s opinion of what they want to see. We will be asking them, ‘What is the art’s impact on the regional draw for the trail?’ ‘What is the economic development value for the city?’ and ‘How do the sculptures contribute to the legacy and values of Johnny Cash,’” Hellman explained.

For families or the casual hiker, the Johnny Cash Trail is easy enough to enjoy sweeping vistas and wildflowers on hillsides in a couple of hours. Or linger for the afternoon at Folsom Lake before heading back to the trailhead. For the serious hiker or cyclist who wants to wander outdoors for most of the day, the trail connects to an expansive network of lakes, creeks, hillsides, and other hidden gems to enjoy anytime.

For more information or to keep up to date on trail activities and the art installation, visit https://folsomcasharttrail.com.