New stabilization for this year-round trail. 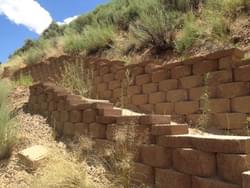 The San Juan River below Navajo Dam is one of the top ten fly fishing locations in North America. Fishing enthusiasts from all over the world come to New Mexico to fish these waters. As such, river access trails need to enable significant year-round traffic.

The “BOR” trail at Navajo Lake State Park descends steeply down a north facing slope from a parking lot on NM Highway 511 to the wetlands and river below. With an average gradient over 13%, the first 375 feet of trail was badly eroded despite prior attempts at trail stabilization using wooden structures, which were deteriorating. In addition, the riparian area was being threatened by soil that was being carried into the fragile wetland of the river’s floodplain from the eroding trail.

The narrow tread and steep gradient of the trail posed significant safety hazards, especially in wet or frozen conditions. During the winter months, the trail remained icy because of poor drainage and its north facing aspect. Since many trail users are seniors wearing chest waders and carrying fishing or hunting gear, it was critical that the trail be safely navigable by low mobility users.

A Recreational Trails Program project supported the design and reconstruction of the eroded trail. Under the leadership of the State Parks Division of the New Mexico Energy, Minerals and Natural Resources Department and in partnership with Professional TrailBuilders’ Association member Reineke Construction, more than 2000 modular retaining wall blocks and 43 pre-formed concrete steps were installed by hand to improve overall
safety and sustainability of the trail. 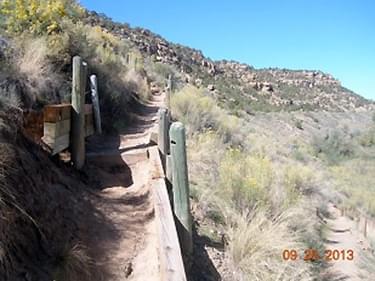 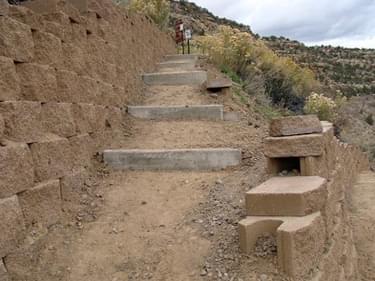 One hundred tons of materials were used to widen the trail tread, reduce the gradient, provide passing/resting areas, reduce tread erosion, and stabilize the steep, highly erodible side slopes. Approximately 12 tons of wooden timbers, pilings and assorted lumber were removed from the trail and were recycled for use elsewhere within Navajo Lake State Park.

The trail was kept open during construction to accommodate outdoor enthusiasts who travel from around the world to this specific reach of the San Juan River. Many of the trail users expressed appreciation for the reconstructed trail and recounted previous trips navigating the icy slopes.

The construction crew reported an encounter with a particularly excited Japanese trail user, who, upon returning from a day of fishing, stopped to show photos of the huge trout he had caught in the catch-and-release-only quality waters that are accessible via the trail. Despite the language barrier between the crew and the trail user, it was clear that this visitor had an experience of a lifetime! 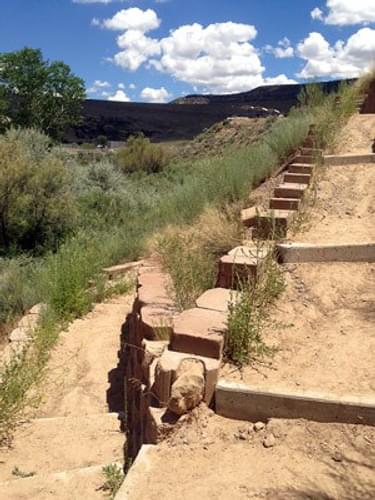 The specifications for the work were described as follows:

"To remove all the existing post and timber structures and install modular CMU retaining wall block and precast concrete steps to manage water induced erosion and tread wear. To prevent the side slope from sloughing onto the tread we propose to install a modular block retaining wall along the uphill side of the trail. The wall shall be 30 to 40 inches high with a cap block topping. Finish grade of the wall shall be a few inches above the existing grade to catch and channel water along the wall and spill away from the trail at the switchback turns. For control of tread erosion we shall install precast concrete steps at each switchback tum with several intermediate steps placed in the trail segment between turns. Trail segment steps will be outsloped with modular block erosion control dams on the downhill side of the step. Steps will reduce the tread gradient to be generally less than 10% between switchbacks, thus improving tread sustainability and user safety. The retaining wall, which will be continuous along the uphill side of the trail, can serve as user support when the tread is slippery."

Details from the construction work: