By N.R. Sumathi and David A. Berard Center for Community Economic Development, University of Wisconsin-Cooperative Extension 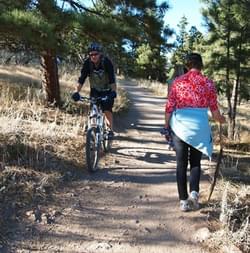 Although mountain biking is a rapidly growing activity within Wisconsin and the nation, little research has been conducted on its impact. This study profiles mountain biking use characteristics from the Chequamegon Area Mountain Bike Association (CAMBA) trail system located in northwestern Wisconsin.

The importance of outdoor recreation on public lands is a well established fact. There is growing interest in various traditional land based outdoor recreation activities such as hiking, bird watching, hunting, and mountain biking. With growing interest and participation in mountain biking, there are demands placed on resource managers regarding management decisions in the use of available land resources. Although this activity has grown in popularity, information on user profiles is still sporadic and undocumented. More information is needed on descriptive aspects of the activity, particularly with respect to user characteristics, resource preferences, and patterns of participation, in an effort to understand mountain biking as a recreational activity, a group representing the U.S. Forest Service, Chequamegon Area Mountain Bike Association (CAMBA), Northwest Regional Planning Commission, and the University of Wisconsin-Extension embarked on a research project to gather more information about mountain bikers in the Chequamegon National Forest area of northwest Wisconsin.

The intent of the study was to identify attitudinal and behavioral characteristics of bikers visiting the CAMBA trails. Characteristics including trail attributes, motivations to bike in the area, trail preferences, and local economic impacts were of interest. Specifically, the objectives of the research included:

i. To characterize bikers with regard to demo- graphic makeup.

ii. To describe patterns of participation, particularly with respect to participation rates and trail preferences.

iii. To identify areas of existing or potential conflict between mountain bikers and other forest resource users.

iv. To determine the current economic impact of bikers to the region and establish baseline information.

v. The objectives were addressed through a two-stage survey that included an initial short survey and a subsequent mail survey.

Research methods: After reviewing other mountain biking research, the study team determined that a two stage sampling design was the most appropriate data collection technique. As a first step, a short survey printed on a card was placed at key points including bike shops, area restaurants, lodging establishments, and trail heads. Bikers were encouraged by the various business establishments to fill out the survey. The short surveys that were completed were dropped off at one of the sites administering the survey.

Response: Of the 3 19 respondents that completed the short survey, 21.9 percent were filled out by participants of the Chequamegon Fat Tire Festival. Of the 3 19 respondents, 280 had agreed to answer a longer survey and were sent a four- page survey instrument that dealt with attitudes, preferences, trail management, marketing, and economic impact. The packet consisted of a survey, envelope, cover letter and a postage-paid return envelope. Of the 280 that received the longer survey, a total of 212 returned completed surveys, yielding a response rate of75.7%.

Surveys coding: Valid and complete surveys were then entered into a database and were prepared for statistical analysis. SPSS (Statistical Package for Social Scientists) was used to perform data analysis and generate frequency tables.

This section reports on results of the survey focused on a specific trip taken by the respondent (trip taken when they filled out the short survey) when they participated in mountain biking activities on the CAMBA trails.

In an effort to focus on specific attributes of biker behavior, questions were developed to provide baseline data on how, where, and when people bike in northern Wisconsin and what other activities they engaged in. The other main activities that bikers participated in during the previous twelve months were walking/hiking, road bicycling, cross country skiing and running and canoeing.

This section summarizes responses of survey participants to questions about how they perceive and prefer certain specific attributes of the mountain biking experience in northern Wisconsin. The attitudes, perceptions and preferences of mountain bikers have implications for trail management, economic development, and outdoor recreation planning.

Bikers were also asked if there were problems associated with one or more trail characteristics. The ranking was based on a 5 point scale with 1 representing "not a problem" to five representing a "major problem". Compared to other characteristics, bikers identified logging activity, lack of drinking water, and lack of restrooms as the biggest problems. Most of the other factors such as trail maintenance, crowding, litter, and safety were not viewed as problems by the majority of the riders. Table 1 contains detailed information on what riders viewed as problems.

When respondents were asked to prioritize the problems faced on the trails by indicating the most severe of all problems, the following results were obtained.

When asked to prioritize characteristics, respondents indicated that they preferred single track trails, natural surroundings, and difficult trails. Respondents were asked to rate trail preferences based on a scale of 1 to 5, and the ratings were summarized (Table 3) by combining 1 and 2 (not a problem) and 4 and 5 (major problem).

This section summarizes results of the survey in relation to regional marketing of recreational goods and services. Important components of market analysis include identification of where current visitors are from, which non-biking regional characteristics are important, information sources used in learning about the region, and factors perceived to influence continued use of this region.

When summarized by Areas of Dominant Influence (ADI), it was apparent that a large number of bikers were from the Twin Cities ADI (44.8 percent). An ADI (defined by the Arbitron Ratings Company) is a television viewing region based on measurable viewing patterns of individuals making up the area. Each county in the U.S. is allocated exclusively to one ADI. Approximately 10.8 percent were from the Chicago ADI and the remaining were mostly from different parts of Wisconsin mainly the Madison and Milwaukee ADI's. The category 'Others' includes Mankato, Des Moines, Champaign, Columbus, Flint, Cincinnati, Cleveland, Fargo, Omaha, Columbia, and Minot.

In terms of spending during the previous twelve months on mountain biking related items, an average of $362 was spent within a 30-mile radius of Cable and an average of $1,480 was spent outside this area. It is evident that bikers create a significant economic impact on the local economy. Users of these recreational trails, through their expenditures in the local area, generate numerous opportunities for business development.

The distribution of riders by cluster was as follows:

The trail count data from 1996 was used in conjunction with the expenditure information from 1995 since trail use for 1995 was unavailable.

The economic impact of mountain biking was conducted by developing a regional economic model of Sawyer and Bayfield counties using micro-IMPLAN, a standard input-output system. The model measured the number of jobs created and all forms of private and public income (i.e., employee compensation, property income, and indirect business taxes) generated by the sport.

There are some caveats that need to be kept in mind as the results in this section are interpreted. Assumptions regarding expenditure patterns, assumptions of input-output analysis and accuracy of trail count data are all factors. However, there is no doubt that the trails are a draw to the area and result in an inflow of outside dollars thereby causing a positive impact on the local economy. The economic impact results are based on the trail count data and estimates provided on the total ridership. It is assumed that each rider did not trip the trail count equipment more than once a day. Since the trail counters captured the data from mid May to early November, any bikers that rode the trails outside these months were not captured.

The research reported here provides baseline information to policy questions dealing with the regional development potential of mountain biking in northern Wisconsin. Specifically, characteristics of mountain bikers in the CAMBA trails were presented, Information on demographic makeup, the attitudes and perceptions of bikers in general, were explored. The economic impact of mountain biking as a recreational activity was also presented.

Since a significant number of bikers obtained information about the trails through word-of mouth, it is important that visitors to the region have positive experiences. It is therefore important for area businesses to ensure that bikers leave with positive memories of their recreational experience.

While northern Wisconsin is rich in natural amenities, communities are exploring strategies to increase economic vitality in the region. One such strategy is tourism development, and mountain biking represents a positive tourism activity that contributes to the economic base of the local economy.

This research was made possible through a generous contribution of time and money from the U.S. Forest Service. Also, thanks to Rock Shox/IMBA for their financial contribution. The authors would like to thank the following individuals on the study committee: Steve Hoecker,Chequamegon National Forest; Ron Bergin, Chequamegon Area Mountain Bike Association (CAMBA); Dave Nelson, Chequamegon National Forest; Sheldon Johnson, Northwest Regional Planning Commission. Special thanks to Ron Bergin for organizing and coordinating data collection efforts. The authors extend appreciation to the following agencies for their assistance in distributing surveys: Cable Area Chamber of Commerce; New Moon Bike Shops; Hayward Chamber of Commerce; Seeley Hills Ski and Bike