The trail is steeped in history, and offers a rich diversity of eastern wildflowers and animals in the area of Virginia between the Blue Ridge Mountains to the east and the Great North Mountain to the west. 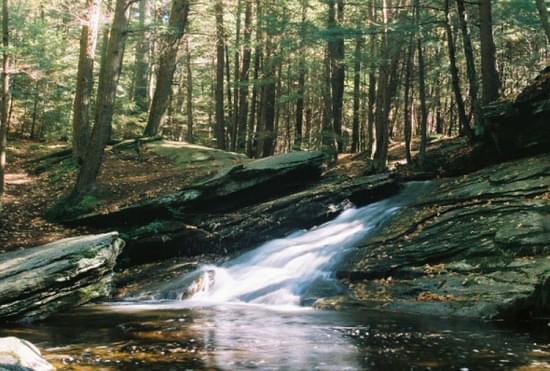 Take a journey through Massanutten Mountain and explore the wonders found on the Lee Ranger District of the George Washington and Jefferson National Forests. This trail is not only steeped in history, but also contains a rich diversity of eastern wildflowers and animals. For 71-miles you can enjoy overlooks with vistas that peer into the Blue Ridge Mountains to the east and the Great North Mountain to the west.

You can explore rocky creeks, passages, and hollows hidden by this mountainous terrain. Many portions of this trail follow old roads or trails allowing you to follow the many footsteps of those who made history in this area.

From pre-revolutionary War times through the New Deal era, the Massanutten has been in the forefront. The name Massanutten probably originated from a Native American word for either sweet potatoes or the baskets that the American Indians wove. George Washington surveyed the inner valley in the mid 1700s. During the Revolutionary War, General George Washington ordered General Daniel Morgan to construct a road over the eastern ridge into this inner valley. This road, known as Morgan's Road is now the Veach Gap portion of the Massanutten Trail. The road into the valley was readied as a potential retreat in case the Continental army was defeated at Yorktown. 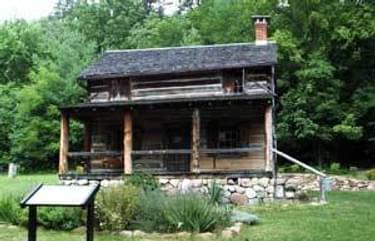 The enrollees of Camp Roosevelt built the Elizabeth Furnace Cabin in 1936; photo by Mike Sutherland

In the early 1800s, European settlers brought the production of pig iron to the valley. Much of the area was mined for iron ore and trees were cut for production of charcoal. Users of the Massanutten Trail pass old charcoal hearths and mining operations with their tailing piles. Elizabeth Furnace, located along the northern end of the Massanutten Trail is one of the few remaining pig iron furnaces. During the Civil War, the Confederate and Union soldiers were ever present. The Shenandoah Valley was known as the bread-basket of the Confederacy and was the site of many battles. In October of 1864, Union forces burned most of the farm structures and stored grain facilities in Fort Valley as they marched through the area. Signal Knob, an overlook on the Massanutten Trail located at the far north end of the Massanutten was used as a lookout and signal station by both Union and Confederate troops. Breast works used by both sides in defense of Signal Knob can still be seen.

In 1933, Camp Roosevelt, located on the eastern ridge of the Massanutten Mountain, became the first Civilian Conservation Camp in the nation. Thus began the finest program in the New Deal administered by Franklin Delano Roosevelt. The boys of Camp Roosevelt constructed much of the east side of the Massanutten Trail. Observant trail users can find old rock mile markers placed by the CCC. Trail users pass through the Robert Fechner Memorial Forest named after the first director of the CCC.

This 71-mile Massanutten circuit trail was completed in June of 2002. The primary partners now involved in the on-going maintenance of the trail include: The USDA Forest Service, Potomac Appalachian Trail Club (PATC), Mid-Atlantic Off-Road Enthusiasts (mountain bikers), Virginia Happy Trails Running Club, and Old Dominion 100-Mile Ride Club. The Massanutten Trail was constructed and designed to be a multi-purpose trail open to all non-motorized uses and available for use year round. Sections of the trail are considered difficult for bikes and horses making the 71-mile circuit most suitable for hikers or other on-foot user. 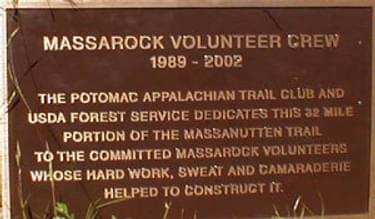 Volunteers working in cooperation with the USDA Forest Service built much of the trail; photo by Mike Sutherland

In the mid 1960s, members of the Potomac Appalachian Trail Club (PATC) proposed the idea of a long distance circuit trail on the Massanutten Mountain. This idea was discussed off and on by PATC and the USDA Forest Service for about 20 years. In 1989, the USDA Forest Service and PATC began a cooperative effort to construct the western half of the trail on Massanutten Mountain. With this cooperative agreement, the volunteer trail crew Massarock was created. This trail crew built 32 miles of trail on the Massanutten Trail over a 10-year period. Most of the eastern half of the trail had been constructed by the Civilian Conservation Corps, by various Forest Service trail crews and by local historic use. A missing section on the eastern half was constructed by the Old Dominion 100-Mile Ride Club, an equestrian group. The Virginia Happy Trails Running Club contributed various efforts on both the western and eastern sections.